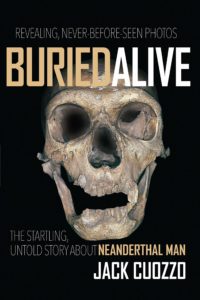 Dr. Jack Cuozzo is an orthodontist who decided to make a comparison of ancient and modern child orthodontic development. He was encouraged by a colleague to examine the original fossils, not just the descriptions in textbooks, for his study of ancient man and was amazed at what he discovered.

Using a portable x-ray machine he was able to make precise measurements of several Neanderthal skulls which are housed in the museums of Europe. What stuck him was the inaccuracy of the textbook descriptions and museum displays of these fossils. Most were inaccurate and some were downright fraudulent. They had all been manipulated to appear ape-like and relatively young in age (of death), living many thousand of years ago. The common description of Neanderthal men is that they were a primitive form of man, heavily built, and living a fairly short life-span, 40-130 thousand years ago.

Dr. Cuozzo's experience in orthodontics told him that over time a human head will change in measurable ways, even after a person reaches adulthood. Throughout a person's lifetime, their skull gets larger, mostly in length, some in width, and little in height. The nose and face get larger, and the teeth and jaws move. The jaw rotates counter-clockwise when viewing the head from the right side. All of these changes are measurable and studies have been done to determine the rate and extent to which they occur.

The rate of change is greatest while a child is growing into an adult, with growth spurts at particular times. Again, the changes continue for the lifetime of a person, although at a slower rate in adulthood. The growth rates for apes are about twice those of humans.

Evidence for slower growth rates in the past is presented. J. S. Bach had a boys choir back in the mid 1700's with 16-year-old's who had not experienced their voice change. Dr. Cuozzo has a reference that claims the average age of voice change in Bach's generation was 17 years. He goes on to say that the average age today is about 13.5 years. Girls today are also maturing at a faster rate than in the past based on the age of their first menstrual period. One other piece of information indicating slower rates of growth in the past is skull measurements of bodies in old graves. The grave markings reveal older ages than the measurements typically indicate, assuming modern growth rates.

Evidence is also given that Neanderthals lived not as long ago as generally believed. Their remains are often found intentionally buried in graves, usually in caves. Some artifacts have been buried with them indicating that Neanderthals were human. Some Neanderthal bones have been found covered with red ochre and with jasper stones placed nearby. This is similar to an ancient Sumerian practice of the period 2000 B.C. Neanderthals are typically assumed by modern archaeologists to have lived 40-130 thousand years B.C.

The revealing of this evidence by Dr. Cuozzo caused him some persecution. The title of the book Buried Alive refers to the evidence, formerly buried in the museums of Europe, which he uncovered. It does not suggest that Neanderthals were buried alive.

Dr. Cuozzo believes that Neanderthals lived during the period immediately following the Flood and that humans have degenerated genetically since then. The Bible gives a record of long ages before the flood and progressively decreasing ages after. Noah, the last generation before the Flood, lived 950 years, 600 of them before the Flood. His son Shem was 100 at the time of the Flood and lived to be 600. Joseph, son of Jacob, died at the age of 110. The dates at birth of the first child in the Bible match the pattern of slower maturity in ancient man.

He also touches on the subject of dinosaurs and men living together. The book includes a photograph of what appears to be a confrontation between a mammoth and a dinosaur carved on the wall of a cave.

Dr. Cuozzo concludes that the evidence shows Neanderthal men were humans who lived several thousand years B.C., who matured slowly and lived to great ages. He believes that this confirms the record of post-Flood ages at birth of the first child and at death, as recorded in the Bible.

The book is well written and is very technical, especially with regards to tooth and skull measurement. It is very relevant to the debate between Creation and Evolution and shows just how far evolutionists will go to bury the truth when it does not fit their personal prejudices. I highly recommend it to anyone interested in the subject.