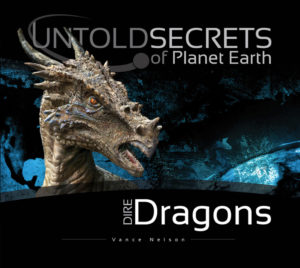 Dire Dragons is the first book in a promised Untold Secrets of Planet Earth series of books which are intended to reveal information that you may not have been told otherwise.  The information is presented as supporting a literal interpretation of Genesis – creation in six days,  six thousand year ago.  The book is slick, glossy and short; which could make it attractive to people who would not generally read such a book.

The author, Vance Nelson, traveled all over the world to collect his evidence in person.  It includes depictions of animals which in our modern, secular culture would be described as “mythical.”  The carvings, figurines, tapestries, paintings, adornments and illustrations originate in ancient American, medieval European, and early African and Chinese cultures.

Most of these depictions are of animals that were called dragons in former times.  What the author found most interesting is that these works of art from bygones eras are strikingly similar to modern portrayals of dinosaurs, right down to the details of the skin.  Could it be that the dragons of former times are what we know as dinosaurs today?

It is only with the tools of modern paleontology and the finding of complete or nearly complete fossils that accurate representations of dinosaurs have been produced.  How is it that ancient cultures were able to depict animals which are so close to our modern dinosaur displays?  Up until the 1800’s only a few teeth and some scattered bones were all that had been found.

The only reasonable explanation is that the ancient depictions are from eye-witness sightings.  However, this contradicts what everyone has been taught; that dinosaurs died out millions of years before men existed.  Could it be that modern science is wrong?

The long-ages, evolutionary sequence of events is taught dogmatically in almost all schools.  Any contradictory evidence is viewed as anomalous.  Animals found alive today which were previously assumed to be long extinct are dismissed as “living fossils.”  But is the dogmatic acceptance of evolutionary theory preventing us from knowing the truth about dragons?

Steve Jobs (RIP) was quoted as saying, “Don't be trapped by dogma - which is living with the results of other people's thinking.”  He may have been thinking about other dogmas when he said that, but it applies equally in this case.

Vance Nelson’s Dire Dragons is a captivating book which should have wide appeal, especially in our society which seems to have a fascination with dinosaurs and dragons.  I believe that is would be an excellent gift to get a person started questioning the dogmas of evolutionary science.