In the Beginning – A Catholic Scientist Explains How God Made Earth Our Home
Gerard Verschuuren
Sophia Institute Press, 2019
181 pages 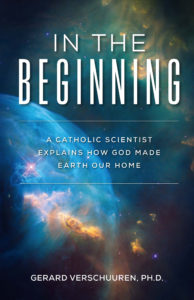 You might think that with a title like: In the Beginning – A Catholic Scientist Explains How God Made Earth Our Home, author Gerard Verschuuren would actually consult the Word of God in trying to figure that out.  But he does not do that. Instead, he completely dismisses the account in Genesis and relies on natural science alone in order to explain the supernatural creation of the world.  The result is the typical “Evolution is true, but God did it” scenario.

You need not go any farther than the dedication page to know what is coming next in this book.  It is dedicated to Dr. Stephen M. Barr, another prominent scientist who turns the foundations of the Catholic Faith in Genesis into a myth.  Right off the bat on page 3 you find the statement: “… the Book of Scripture is not a history book …”  And on page 5: “… Genesis, chapter 1, is not about an event that happened long ago.  Neither is it an event that lasted six days …”   This flatly contradicts Pius XII who said in Humani Generis (1950, #38) that Genesis is “history in a true sense.”  It also contradicts Leo XIII who said in Arcanum (1880, #5): “We record what is to all known, and cannot be doubted by any, that God, on the sixth day of creation, having made man from the slime of the earth, and having breathed into his face the breath of life, gave him a companion, whom He miraculously took from the side of Adam when he was locked in sleep.”  A Catholic should have more respect for the long-held traditions of his Mother the Church.

Unfortunately, Dr. Verschuuren fell into the same trap that many people have fallen into when reading the account of the supernatural creation in Genesis.  He notes that the sun was created on day 4, three days after the day-night cycle was established and one day after plants were created.  Therefore, the Genesis account cannot be chronological/historical in his mind.  One easy solution to this problem is that the light created on day 1 was in a general, nebulous form that was only discretized into the sun and stars on day 4.  In addition, there is the fact that the Bible states that God indeed created the world in six days and rested on the seventh in Genesis 1-2, Exodus 20:11, and Exodus 31:17.  Also, the six waters jars used for the miracle at Cana were intended by Jesus to be a representation of the six days.  But if you want to uphold the evolutionist account of creation, you have to ignore the Word of God.

In the chapter on dating techniques, Dr. Verschuuren asks: “How do we know the age of the universe if no one was there at the beginning?”  Apparently, he forgot that God was there at the beginning and told Moses to write it down.  The proposed expansion rate of the universe and radiometric dating techniques are used to explain the vast ages arrived at by evolutionists in order to make the natural development of the universe seem possible.  However, many assumptions are built into the expansion rate and dating techniques so that if any one of them were false, the theories would collapse.  Two pieces of evidence against them are that Halton Arp observed celestial bodies in proximity to each other with very different red shift values which would negate the expansion rate theory.  Also, dinosaur bones have been carbon dated to thousands of years old and have been found to contain flexible blood vessels, soft tissue, proteins and intact strands of DNA.  That alone would erase the millions of years contrived to give evolution enough time to work.

Perhaps the biggest error that Dr. Verschuuren makes is stated on page 22: “Obviously, the unfolding of the universe, starting with the Big Bang, is a process that plays out in time and can be studied by the physical sciences …”  It is erroneous to think that a supernatural event can be studied by the natural sciences.  Scientists are extrapolating too far.  Natural laws only came into effect when God was done creating the universe.  We need Divine Revelation to tell us what happened before that.

The central thesis of the book – the “cosmic design” – is summarized on page 132: “In other words, evolution follows the path of least resistance in the landscape of the cosmic design.  It does not just flow in a purely random manner.  The cosmic design creates the ‘bed’ in which the stream of evolution meanders.  Somehow, the flow of evolution found its destination in humanity [emphasis added].”  According to Dr. Verschuuren, God just set the material universe in motion at the Big Bang and everything fell into place on its way to humanity because of the “cosmic design.”  That is fairly close to the definition of continuous/progressive creation espoused by many Catholics.  Too bad it has nothing in common with the creation narrative in Genesis.

In the book, the “god of the gaps” theory is ridiculed (page 32) along with Intelligent Design (ID – page 106), but the “cosmic design” theory has God continuously intervening in nature to bring about mankind after billions of years.  Dr. Verschuuren even admits that: “The cosmic design is an intelligent design” (page 149) thereby unintentionally supporting the ID movement.

Although there is an extensive discussion on mass extinctions and ice ages, the global flood of Noah – the real cause of the one mass extinction and the one Ice Age – is never even mentioned.  Neither is the Tower of Babel account mentioned in the discussion on languages.  This should not be surprising in a book that gives so little credit to the Word of God.  The flood of Noah takes up three chapters in Genesis.  Jesus Himself speaks of Noah’s Flood as a literal event, especially with regard to His Second Coming (Matt. 24:37).  St. Peter mentions this literal event twice (1 Peter 3:20 and 2 Peter 2:5).  Never mind the fact that St. Paul says that death entered into the world by sin (Romans 5:12), not as the result of an asteroid impact.

The fact that the Word of God reveals that the universe was created with Christ the Man-God as the exemplar (Colossians 1:16-20) and that the earth is the centerpiece of the material creation (Genesis 1:1) is only ridiculed in passing on page 170: “… what had falsely been believed for centuries – that we live in a geocentric and anthropocentric universe.”  This is in the same chapter where it is suggested intelligent life may be present on other planets and that it is a “scientific issue that can never be settled ahead of time” (page 171).  That would contradict the Word of God again which says that Eve was the mother of all the living (Genesis 3:20), and that Christ died once (on earth) for sin (Romans 6:10).  Apparently, Dr. Verschuuren believes that science should have the final say on such matters, even though he admits that it “never has final answers” (page 136).

You would think that in order to completely discount the Word of God, Dr. Verschuuren would have solid evidence to back up his theories.  However, he has no such evidence as he admits in his discussion of the development of life on pages 94-96: “Somehow, life managed to emerge on Earth …”  Followed by; “It suggests that life began at deep-sea hydrothermal vents, which spew out mineral-rich water.  It is thought that the chemical and energy found at these vents could have provided perfect conditions for primitive life to form.”  And then: “Obviously, there are still many essential steps missing on the road from simple molecules to complex organisms – even organisms as ‘simple’ as bacteria – but they are so technical that we will skip them here [emphasis added].”  That last statement is a further admission of the lack of any scientific evidence of a natural ability of organisms to change into different organisms.  It does not happen.  Star formation is equally problematic, but that is glossed over as well.

At least Dr. Verschuuren believes in God and that He did create the universe, which he admits is designed by an intelligence.  However, the complete rejection of Genesis as history, not to mention the statements of Our Lord and St. Peter on the Flood, is problematic for Christians.  Without Adam and Eve, and the Original Sin, there is no need for a Redeemer.

Atheist G. Richard Bozarth astutely quipped that: “Christianity, if it is to survive, must have Adam and the original sin and the fall from grace, or it cannot have Jesus the redeemer who restores to those who believe what Adam’s disobedience took away.”  Richard Dawkins said: “Darwin made it possible to be an intellectually fulfilled atheist.”  Richard Lewontin admitted: “Our willingness to accept scientific claims that are against common sense is the key to an understanding of the real struggle between science and the supernatural.  We take the side of science in spite of the patent absurdity of some of its constructs … because we have a prior commitment, a commitment to materialism … Moreover, that materialism is absolute, for we cannot allow a Divine Foot in the door.”  The Big Bang and theory of evolution were designed to keep God out of any discussion of origins.  Sticking God back into godless theories does not make them acceptable to Bible-believing Catholic Christians.

Humanity has a fallen nature, which we can know from the Biblical account of the Original Sin.  We are always looking for an easy way out of difficult situations.  Most people follow the path of least resistance.  If everything can be explained by a system of thought that has no moral demands, then many people will cling to that system rather than one which involves denying oneself and taking up the cross (cf. Matt. 16:24)

Catholic evolutionists like Drs. Stephen Barr and Gerard Verschuuren seem to think that it is better to reject the obvious meaning of Scripture and to inject God into wild hypotheses that were meant to keep the supernatural out of the discussion.  They do not realize how damaging such hypotheses are to the Christian Faith.