In the beginning was information
A Scientist Explains the Incredible Design in Nature
Dr. Werner Gitt
Master Books, 2005
264 pages 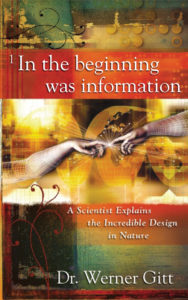 In the beginning was information was written by creationist scientist Dr. Werner Gitt to show that matter and energy alone are insufficient to explain nature; information is a critical component which implies an intellect or will on the part of the originator.  This refutes any naturalistic/materialistic origin of life or the universe.

Matter may carry information, but it cannot be the source.  We can see this by observing nature itself.  DNA is the most astounding carrier of information in nature.  Throughout the book Dr. Gitt formulates laws and theorems to support his ideas which are based mostly on observation of the natural world.

One necessary aspect of information is that is must be encodable so that can be used to pass the information from the sender to the recipient.  This requires intelligence and will on the part of the sender.  Since nature contains information, someone obviously put it there on purpose.  The complexity that we observe in nature is a witness to the awesome intelligence of God.

Dr. Gitt uses his theorems to analyze human language and concludes that it could not have had a natural origin.  He also analyzes different energy generation systems and shows that photosynthesis is an extremely efficient system that is still not completely understood by scientists.  Another interesting aspect of photosynthesis is that the mechanisms involved are very similar to respiration.  The two processes are finely tuned to each other and are in ecological equilibrium.  Plants and animals were designed for each other!

His analysis of DNA shows that it is optimized to be able to carry the maximum amount of information in the smallest package.  The processes operating in the human body in a 24-hour period involve more information than is contained in all the books in the entire world!

It has been argued that Darwin made it possible to be an intellectually fulfilled atheist.  However, modern science has now made that impossible.  This book shows that nature contains an incredible amount of information that only could have been created by an intelligence far beyond our own.  Science has finally gotten around to discovering what St. Thomas Aquinas knew in the thirteenth century.