It would seem that in every age the Church faces particular challenges which vary according to the dominant errors of the time. In one of his works on temptations that afflict the dying and how to overcome them, the great Saint and Doctor of the Church St. Robert Bellarmine indicates that in his day many souls suffered from temptations against the mystery of the Holy Eucharist - and this is not surprising, since St. Robert Bellarmine lived during the protestant revolution whose principal leaders all denied the apostolic teaching on the Holy Sacrifice of the Mass and the Real Presence of Jesus in the Blessed Sacrament. What is interesting to note in this connection, however, is that St. Bellarmine indicates that souls who are tempted to doubt God's Revelation regarding the Holy Eucharist could often be helped to overcome the temptation simply by recalling other dogmas of the faith that they believed without question, even though they had no other ground on which to believe in those dogmas, except for the authority of the Church, "the pillar and foundation of the Truth." He writes:

Generally the sick who are tempted are to be warned that, if the temptation concerns the nature of God who, according to the faith, is one in essence and three in persons, they should consider how little we know not merely about spiritual, but even about bodily creatures. In fact, many men find it hard to believe that single stars of the sky are larger than the whole orb of the earth; yet mathematicians easily prove that it is utterly true. But if such a bodily matter is not understood by learned men who still believe that it is so, why should they not believe what God Himself revealed about His nature through the apostles and prophets and confirmed with many great signs and miracles? 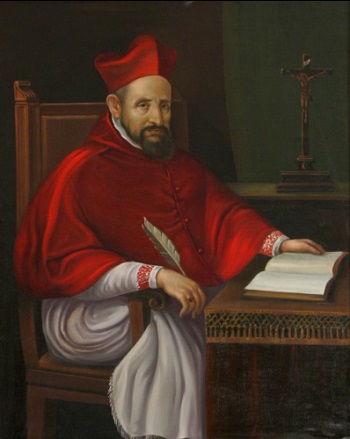 But if the temptation concerns those things which we believe God has done and does every day, such as, above all, the changing of bread and wine into the Body and Blood of Christ, while the accidents of bread and wine remain, one has to make use of examples of the many kinds of things we believe God has done, though we cannot account for any of them. Who can comprehend that the whole world was made out of nothing by the mere command of God? And yet many who believe this cannot be taught to believe in the mystery of the Eucharist. Likewise, who can believe that the bodies of the dead that have been reduced to ashes or to dust or that have been devoured by beasts or turned into plants will rise up in a moment by the word of the Lord? And yet all Catholics readily believe this and profess it in the Creed. Even Job believed this a few thousand years ago. For he said, "I know that my Redeemer lives, and in the last day I shall rise out of the earth. And I shall be clothed again with my skin (Jb 19: 25-26). On the basis of these and other such marvelous works of God which surpass our understanding, other things which the Catholic Church proposes for our belief can be easily accepted, since the Church is, by the testimony of the Apostle, "the pillar and mainstay of the truth" (1 Tm 3:15). These and similar things can be proposed to those who are tempted about faith (emphasis added) (St. Robert Bellarmine, The Mind's Ascent to God by the Ladder of Created Things", Chapter 12, "The Art of Dying Well.")

It is amazing to read St. Bellarmine's words in the twenty-first century, when so many Catholics no longer believe in the creation of the whole world and all it contains by God's Word - yet in St. Bellarmine's day this was something that virtually all Christians believed without question. This highlights the fact that for St. Bellarmine - as for all of the Apostles, Fathers, Doctors, Popes and Council Fathers in their authoritative teaching - the entire work of creation was understood to be supernatural from beginning to end, thus rendering absurd the Enlightenment fantasy that brilliant minds could understand the origin of man and the universe by extrapolating from the material processes that are going on now in the order or providence all the way back to the order of creation at the beginning of time. St. Bellarmine's work exposes the incoherence of so much contemporary Catholic apologetics which accepts the supernatural reality of the Virgin Birth and the Resurrection of Jesus on the testimony of God's Word - as understood in His Church from the beginning - while rejecting the same testimony to the creation "of the whole world from nothing by the command of God"!

Through the prayers of the Mother of God, may the Holy Spirit restore the faith of all Catholics in the true doctrine of creation and lead us into all the Truth!

P.S. We have been granted a new permit for our outreach to the public near the Smithsonian Institution in Washington, D.C., on Sunday, July 28, to expose the evolution fraud and to proclaim the truth of Creation and of Our Lord's Life-giving Passion, Death and Resurrection. If any of our readers would be willing and able to come to Washington, D.C. to participate in this project, please send me an email at howen@shentel.net