In this newsletter I would like to share one of St. Maximilian Kolbe's profound meditations on the sacred history of Genesis, but, before I do, I would like to ask you for your thoughts regarding the time and place of our leadership retreat in 2020. As most of you know, the leadership retreat is a six-day conference designed to equip attendees spiritually, intellectually, and practically to proclaim and defend the traditional doctrine of creation in their spheres of influence. To make it easier for fathers to attend the retreat without being separated from their families during their precious vacation time, we began opening up the leadership retreat to families several years ago. I would like to know how many of our readers would be interested in attending the leadership retreat if we were to hold it in the first week of August at the retreat center of the Society of Our Lady of the Most Holy Trinity (S.O.L.T.) in Corpus Christi, Texas.

During our leadership retreats, Holy Mass is offered at the beginning of every day in the Extraordinary Form of the Latin Rite or in the Byzantine Rite. We then offer an intensive series of lectures that enable attendees to understand, proclaim and defend the traditional doctrine of creation from the perspective of theology, philosophy and natural science. We offer separate classes for children every morning, and in the afternoon we rehearse a play on a theme related to the traditional Catholic doctrine of creation, with the children whose parents attend the retreat. For several years we have produced a play on the life of a saint whose life and writings were connected with the traditional doctrine of creation.  Last year's play focused on St. Dominic and his struggle against the Albigensian-Catharist heresy which denied the special creation of all things by God at the beginning of time and which prompted the Pope and the Bishops to define the dogma of creation at the Fourth Lateran Council in 1215.

Since Fr. James Flanagan, the founder of S.O.L.T., drew his inspiration for his new foundation from the writings of Venerable Maria of Agreda whose private revelations strongly affirm the traditional doctrine of creation, it would be especially appropriate to produce the play at an S.O.L.T. retreat center. My wife, who was a professional director for the theater before we welcomed the first of our nine living children into the world, will direct the play, but she will need some enthusiastic co-workers to help her rehearse and perform the play in five or six days.  I would be very grateful to know if any of our readers have children between the ages of 8 and 18 who would like to take part in the play, and if any of you would be willing to help my wife with the direction and production of this dramatization of the life of "the Blue Nun," Venerable Maria of Agreda. If finances are a problem for families or individuals who would like to attend, please send me an email at howen@shentel.net and I am sure that we can make it possible for you to attend with God's help. Our only requirement is that the adults who attend the retreat be committed to advancing the mission of the Kolbe Center as much as they can within their spheres of influence.

St. Maximilian Kolbe on the Fall of the Angels and Genesis 3:15

Psalm One reminds us:

Blessed is the man who hath not walked in the counsel of the ungodly, nor stood in the way of sinners, nor sat in the chair of pestilence:

But his will is in the law of the Lord, and on His law he shall meditate day and night.

We often forget that this "Law" includes the sacred history of Genesis, and that Genesis lies at the foundation of Holy Scripture on which we ought to meditate day and night.

St. Maximilian Kolbe was certainly one of the saints of modern times who "mediated on this Law of the Lord day and night." From his meditation he drew forth a deep understanding of the role of our Immaculate Mother in the test of the holy angels. In this newsletter I would like to share the fruit of St. Maximilian's meditation on this mystery, and then add a confirmation of my own from the same source - the sacred history of Genesis. 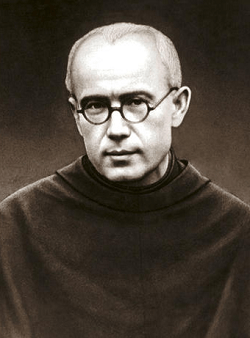 In an article entitled "The Immaculata Before Her Coming into the World," written in the monastery of Niepokalanow, in August 1940, St. Maximilian wrote:

After creating the Angels, God willed that, in full consciousness and will, they should give proof that they would always and in everything desire to accomplish His Will. He showed them the mystery of the Incarnation, that is to say, that He would call into existence a human being, with body and soul, and that He would raise up such a creature to the dignity of Mother of God, so that She would become also their Queen and they would have to venerate Her as well. Countless legions of angelic spirits joyfully greeted the one whom their Creator had decided to raise so sublimely and humbly paid homage to their Lady. Some of them, however, headed by Lucifer - forgetful of the fact that all they were and possessed they had received from God, while they alone were absolutely nothing - rebelled and refused to submit to God's Will. For they considered themselves superior to a human being covered with flesh. Such an act of veneration seemed to them a debasement of their dignity. They allowed themselves to be carried away by pride and refused to do the Will of God.

Because of that, immediate, eternal punishment befell them: separation from God, Hell. Being pure spirits, they possessed penetrating intelligence, whereby their action was fully conscious and voluntary, and in their guilt the features of mortal sin, committed with absolute awareness, were most evident. That is why those angels immediately became demons, and forever.

Since then, the memory of the fact that this creature had become the affirmation of the good Angels and the assurance of their eternal happiness, while to the demons She was the cause of scandal and separation, filled the latter with hellish hatred toward Her, a hatred like the hatred they harbored toward God, of whom She was supposed to be such a faithful image.

In the Garden of Eden, Satan saw a being like the one who was the object of his anger. He cannot reach God, he cannot reach Her [Mary], but pours out his hatred onto Her future mother, on the first mother of mankind [Eve]. He manages to persuade the woman to oppose the will of God and to seek perfection not in submission to God's intentions, but in following one's reason. He wins her over with pride. The human being, who knows with the help of the senses, is far from the clarity of knowledge that a purely spiritual being possesses. And it is for this very reason that man's sin is much less severe. That is why God's mercy promises [to our first parents] a Redeemer, while to Satan God predicts that the victory he has achieved over Eve, the mother of the foretold being, will not in any way alter the divine plan. Indeed, He predicts that "She will crush his head," although he continuously "lies in wait" for "Her heel," as happens to this day."

There is no doubt that each and every one of us will be given some special insight into this mystery if we, like St. Maximilian, meditate on the Law of the Lord day and night. In the last few years, as I tried to obey this exhortation, I was struck by the fact that Our Lord in addressing satan in Genesis 3:15 refers to "the Woman" as someone who is already familiar to lucifer. But how could this be - when Moses makes no particular mention of any woman besides Eve prior to the Fall of Adam? 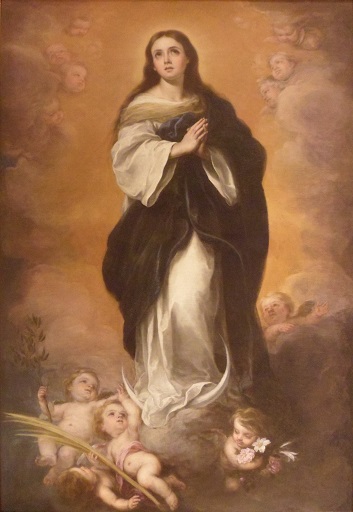 While the Magisterium of the Church has not made a final decision on this question, I believe that this reference to "the Woman" strongly supports St. Maximilian's thesis that the fall of the angels involved a rejection of "the Woman." Since "the Woman" is identified as Our Blessed Mother in the papal definition of the Immaculate Conception, it follows that God must be referring to Our Lady when He addresses satan in Genesis 3:15. But this, in turn, must mean that "the Woman" has already been made known to lucifer, since the Lord clearly presumes that satan knows exactly which "Woman" He is talking about. And that would support St. Maximilian's thesis that the fall of the angels occurred when lucifer and his followers rejected that very "Woman" as their queen.

In closing, let us strive to live our consecration to Jesus through the Immaculate Heart of Mary in every moment, so that we can hasten the Triumph of Her Immaculate Heart, the consecration and conversion of Russia, and the greatest evangelization that the world has ever seen in the era of peace promised by Our Lady of Fatima - an evangelization that will be grounded not in theistic evolution, but in the true Catholic doctrine of creation!

P.S. Please continue to spread the word about "Foundations Restored" and encourage your friends and relatives to visit the website www.foundationsrestored.com and to view the first two episodes gratis.

P.P.S. The March for Life in Washington, D.C., will take place on January 24, 2020. If any reader of this newsletter has any influence with any parish, school, or other pro-life group that will be attending the March, and that plans to attend any of the meetings that will take place before the March, either in the evening of January 23 or on the morning of January 24, before the March, please consider asking the leadership if I could speak to your group about "Creation, Evolution and the Anti-Culture of Death," including a brief personal testimony to the part that evolutionism played in my father's loss of faith in Christianity and in his ultimate appointment to be the first Secretary General of International Planned Parenthood Federation at the very time that IPPF changed its position on abortion and became the world's number one provider of abortion, contraception and sex education. Failing that, if anyone would be willing to help us hand out our flyer "Evolution and the Culture of Death," please let me know as soon as possible, and I will be happy to send you as many of the flyers as you think you can distribute before, during and after the March for Life.