Christ is baptized!  In the Jordan!

In this newsletter I would like to renew an appeal that I have made many times during the last 22 years.  But first I will explain the background to my appeal.  The reigning Pope when Darwin published his book On the Origin of Species by Means of Natural Selection, or the Preservation of Favoured Races in the Struggle for Life was Blessed Pope Pius IX.  In a letter of commendation for a book by a French physician critical of Darwin’s Origin of Species, Blessed Pope Pius IX articulated his verdict on the evolutionary hypothesis:

...[Evolution] is a system which is so repugnant at once to history, to the tradition of all the peoples, to exact science, to observed facts, and even to Reason herself, it would seem to need no refutation, did not alienation from God and the leaning toward materialism, due to depravity, eagerly seek a support in all this tissue of fables . . .​

It is noteworthy that the Pope did not see the serious scientific shortcomings of Darwin’s hypothesis as its most fundamental weakness.  Rather, the Holy Father first noted the total contradiction between Darwin’s account of the history of life on earth and the “tradition of all the peoples.” This is because Pius IX still acknowledged the living memory of the events recorded in the first eleven chapters of the Book of Genesis, preserved by people-groups all over the world; and he knew that it was quite possible to trace man’s lineage in an unbroken chain all the way back to the beginning of creation.

One of the strongest confirmations of the Holy Father’s good sense lies in the fact that the seven-day week bears witness to the primordial divine institution of that rhythm in the creation of the world.  History records that various societies have kept time in various ways, but evidence from the Bible and from secular sources indicates that the seven-day week has been employed as a fundamental rhythm of human life from time immemorial.  It is widely asserted nowadays that the seven-day week was a human invention, and that it represented a division of the month into quarters.  According to this school of thought, the seven-day week was invented by the Assyrians who passed it on to the Babylonians who introduced it to the Hebrews during the Babylonian Captivity in the sixth century B.C.  There are many fatal flaws in this hypothesis, however.

In the first place, the idea that the seven-day week was introduced to the Hebrews during the Babylonian Captivity rests on the discredited Documentary Hypothesis, which asserted, on very limited evidence, that writing did not exist among the Hebrews in the time of Moses.  In reality, archaeological discoveries have demonstrated that writing existed more than 500 years before the time of Moses, and thus there is no reason to doubt the plain truth of Our Lord’s words: “He [Moses] wrote of Me” (John 5:46) A careful reading of Moses’ writings in turn demonstrate that the organization of time around a seven–day week existed long before his day.

That the children of Adam, even after the expulsion from Eden, continued to regard every seventh day as a day of rest and worship is clearly implied in the story of Cain and Abel.

And in process of time it came to pass, that Cain brought of the fruit of the ground an offering unto the Lord.  And Abel, he also brought of the firstlings of his flock and of the fat thereof (Genesis 4:3, 4).

On this particular day, Cain was not tilling the ground, as he normally did, nor was Abel tending his sheep.  On this day, they met with the Lord and brought Him an offering.

The story of Noah contains many allusions to the seven-day week.  Note the following in Chapters 7 and 8 of Genesis:

Whether these repeated references to actions taken every seven days imply that they all took place on God's rest day is not stated, although it does seem probable.  In any case, it is clear that both God and Noah were ordering events in terms of a seven-day cycle. 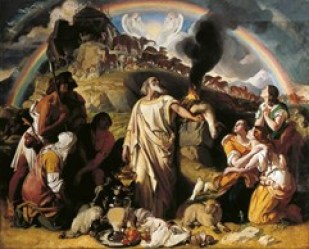 During the centuries from Noah to Moses, there was little occasion to refer in the Bible to the week as such.  However, there do at least seem to be two allusions to it, in the story of Jacob and Leah ("fulfill her week"—Genesis 29:27, 28) and in the story of Jacob's burial (Genesis 50:10).

Whatever form of Sabbath observance might have been practiced by the early patriarchs, it is probable that the long servitude in Egypt caused many to forget its religious significance, even though the weekly cycle was still followed.  When the time came for God to redeem His people, however, He began to remind them of its importance.  In preparation for the great Passover deliverance, He commanded:  "Seven days shall ye eat unleavened bread,—And in the first day there shall be an holy convocation, and in the seventh day there shall be an holy convocation to you; no manner of work shall be done in them, save that which every man must eat, that only may be done of you." (Exodus 13:15, 16).  It is interesting that, in this preparation for the incorporation of the Sabbath into the Ten Commandments, both the First Day and the Seventh Day were days of rest and worship!

Soon after this, the Israelites were strongly reminded that a seventh day each week was intended to be a day of rest, in the experience of the manna (Exodus 16:4, 5, 25-30), which fell for six days each week and was withheld by God on the seventh.  Finally, Sabbath observance was incorporated as the fourth in the array of Ten Commandments recorded for Israel by the very finger of God on tables of stone (Exodus 31:18).

China boasts one of the most ancient civilizations in the world and its oldest form of writing, preserved on bones, dates back four thousand years.  According to many Chinese scholars, these ancient characters seem to reflect a knowledge of the events recorded in the sacred history of Genesis.  For example, in the ancient Chinese characters:

The numeral six depicts a home, for it was on the sixth day of the creation week that the first home was established.  It seems that the Chinese may have originally had the same knowledge as the Hebrews, that God created everything in six days.  The creation of these first two humans completed the earth and its furnishings.  We read from the Hebrew:

Thus the weekly cycle of seven days was established at creation and has been kept ever since, worldwide.  The week is not regulated by the movement of the earth, sun, moon or stars, but reflects only the great historic work of the Creator Shang Di. 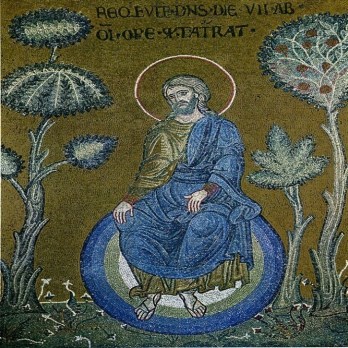 Is the Seven Day Week a Divine Institution?

There is nothing in the historical evidence to contradict the traditional view that the division of time into seven-day weeks existed among the members of Noah’s family, the ancestors of the Hebrews.  But did Noah and other ancients derive the seven-day week from their observations of nature?

The answer to this question is definitely “No.” As Kenneth Westby explains:

We may casually assume that our week is really a division of the moon cycle.  If that is our assumption, we forget that the lunar cycle is not a twenty-eight-day cycle, but approximately twenty-nine days, twelve hours, forty-four minutes and three seconds -- or 29.5306 days between new moons.  A precise quarter of the lunar cycle amounts to the uneven figure of 7.38625 days.  So any week using that true length would begin at different times of the day every time the cycle started.  There is just no way to neatly divide the lunar cycle into weekly blocks of complete days.

Then what about the sun?  Doesn't the cycle of seven relate to the center of our solar system?  Again, no!  The 7-day week is also independent from the annual solar cycle of 365 1/4 days.  A "year" of 52 weeks would have just 364 whole days. Nor is the week in harmonic sympathy with the star year of 366 1/4 days.  Star days or "sidereal days" are about four minutes shorter than solar days (an observer will see a particular star at the same position four minutes earlier on successive nights).  In short, there are no known external rhythms in nature that could explain the near universal existence of the seven day social week (emphasis in original).

The question of whether there is a definite connection between the Ancient Chinese characters and the sacred history of Genesis is not one of mere academic interest.  The great “wife, mother and mystic” Blessed Anna Maria Taigi prophesied the conversion of the entire Chinese nation to the Catholic Faith in the days to come.  Today, however, the Chinese Bishops faithful to the traditional Catholic Faith are being viciously persecuted, and it is incumbent on us to sow the seeds of Truth, so that, by the grace of God, they will germinate and bear fruit in the Era of Peace.  One of the ways that we can do this is to evangelize the millions upon millions of Chinese who are being educated in American, Canadian, European and other foreign institutions.  I know of separated brethren who have successfully used the ancient Chinese characters to evangelize Chinese students here in the United States by showing them that the sacred history of Genesis and the Christian revelation are not foreign but rooted in Chinese history, language and culture.  We Catholics should be leading the way in evangelizing the Chinese in our midst, but we cannot do so by appealing to the ancient characters unless we are confident that the ancient Chinese characters truly reflect a knowledge of the history contained in the first eleven chapters of the Book of Genesis.

To that end, I would like once again to ask if there is anyone in our readership who knows (or knows someone who knows) the Chinese language and Chinese history who would be willing to evaluate the evidence for and against the thesis that the most ancient Chinese characters recorded on bone from 4000 years ago reflect a knowledge of the events recorded in the sacred history of Genesis.   The person who makes the evaluation should be someone who accepts the literal historical truth of the sacred history of Genesis. If you or someone you know would be willing and able to research this topic for the Kolbe Center, we can provide links to articles in English that will give you most of the information you need to make an evaluation. If you can help with this project, please contact me at howen@shentel.net.

Through the prayers of Our Lady, Queen of China and Queen of the Universe, may the Holy Ghost raise up researchers who can establish our evangelization of the Chinese on a firm foundation and contribute to the rapid conversion of that great nation!