One of the ironies of modernist theology is that it almost always derives whatever credibility it has as an expression of Catholic faith from the few supernatural truths that it continues to acknowledge—while simultaneously denying others that are less compatible with the consensus view in natural science.  For example, many a modernist continues to profess his faith in the Incarnation, although the creation of a complete and perfect human nature in the womb of the Blessed Virgin was every bit as supernatural as the creation of Adam, body and soul, from the “virgin earth.”  In his Doctrina Christiana, St. Robert Bellarmine, Doctor of the Church, says this very thing:

...[T]he Holy Spirit, Who is the third person in the Godhead, and one and the same God with the Father and the Son, for His infinite Omnipotence, from the purest blood of this Virgin created the body of the most perfect Infant, and in the same moment He created that most noble soul and united it with the body of this Infant; and all these the Son of God took in His Person; to such an extent that Jesus Christ, who before was only God, at length began to be a man, and in the same way whereby God had a Father without a Mother, so by that power the man had a Mother without a Father.

The secret mysteries of God, even if they are not understood, nevertheless must be believed.  For there are a great many things God can do which we cannot comprehend by our genius, therefore in the beginning of the Creed it was said that God is Almighty.  Moreover, we have a handsome example in the creation of this world.  You know the earth does not ordinarily produce on its own, if beforehand it was not plowed and not planted, or soaked with rain or burned by the sun; just the same, in the beginning when it first produced grain, the earth was not plowed, nor planted, nor warmed and thus (in that manner of speaking) it was altogether virgin; and only through the command of Almighty God through the power of the same God, at that very moment, it produced wheat and grain.  So the virginal womb of Mary, without any human commerce, solely from the command of God, by the operation of the Holy Spirit, produced that most precious grain, clearly the animated body of the Son of God.

Yet how many theistic evolutionists will insist that they believe in the creation of the perfect humanity of Our Lord Jesus Christ in the Virgin’s womb but refuse to believe in the creation of the humanity of Adam from the virgin earth!  Nor is the Virgin Birth the only article of the Creed that theistic evolutionists profess to believe that finds a parallel in the work of fiat creation.  St. Robert Bellarmine in his catechism elaborates on another important analogy between the special creation of Adam as a perfect, mature man, and the resurrection of the dead at the end of the world:

In the beginning of the Creed it was said that God is Almighty, because He can do what seems impossible to us.  After considering that God made heaven and earth from nothing, you can have little difficulty believing that He can return a body that has been reduced to ash to its previous state  . . .

Moreover, just as the Church has always believed that Adam was specially created a mature man, perfect in body, mind and soul, so has She always believed and taught that those who are raised up in the Resurrection of the just will be raised up in perfect bodies.  Yet how many theistic evolutionists who profess their belief in the Resurrection of the Body Sunday after Sunday in the Creed realize that they are professing their faith in a work even more wonderful and supernatural than the original work of special creation that they deny.  As St. Robert Bellarmine explains:

All will rise in that age and stature which we had or are going to have in our 33rd year of life, in which Our Lord rose from the dead.  The reason for this is that boys will reach that greatness which, had they attained it, they would have reached in their 33rd year.  And old men will rise in the flower of their youth at which, when they were 33 years of age, they enjoyed.   And if anyone were blind, or lame, or a dwarf, or deformed in any way in this life, he will rise again healthy, whole, and provided with every sort of perfection, because the works of God are perfect: therefore, what is necessary to a man will be proper, and all vices and defects of nature will be amended . . .

It should be noted that St. Robert Bellarmine had no more difficulty in believing that God created the world and all it contains in six 24-hour days and rested on a seventh 24-day than did the Jews who received the Ten Commandments from Moses on Mt. Sinai:

Those men, therefore, set aside the power of God, and do not consider what the Word declares, when they dwell upon the infirmity of the flesh, but do not take into consideration the power of Him who raises it up from the dead. For if He does not vivify what is mortal, and does not bring back the corruptible to incorruption, He is not a God of power. But that He is powerful in all these respects, we ought to perceive from our origin, inasmuch as God, taking dust from the earth, formed man. And surely it is much more difficult and incredible, from non-existent bones, and nerves, and veins, and the rest of man's organization, to bring it about that all this should be, and to make man an animated and rational creature, than to reintegrate again that which had been created and then afterwards decomposed into earth (for the reasons already mentioned), having thus passed into those [elements] from which man, who had no previous existence, was formed. For He who in the beginning caused him to have being who as yet was not, just when He pleased, shall much more reinstate again those who had a former existence, when it is His will [that they should inherit] the life granted by Him. And that flesh shall also be found fit for and capable of receiving the power of God, which at the beginning received the skillful touches of God; so that one part became the eye for seeing; another, the ear for hearing; another, the hand for feeling and working; another, the sinews stretched out everywhere, and holding the limbs together; another, arteries and veins, passages for the blood and the air; another, the various internal organs; another, the blood, which is the bond of union between soul and body. But why go [on in this strain]? Numbers would fail to express the multiplicity of parts in the human frame, which was made in no other way than by the great wisdom of God. But those things which partake of the skill and wisdom of God, do also partake of His power. 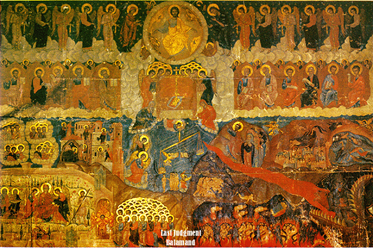 The flesh, therefore, is not destitute [of participation] in the constructive wisdom and power of God. But if the power of Him who is the bestower of life is made perfect in weakness — that is, in the flesh — let them inform us, when they maintain the incapacity of flesh to receive the life granted by God, whether they do say these things as being living men at present, and partakers of life, or acknowledge that, having no part in life whatever, they are at the present moment dead men. And if they really are dead men, how is it that they move about, and speak, and perform those other functions which are not the actions of the dead, but of the living? But if they are now alive, and if their whole body partakes of life, how can they venture the assertion that the flesh is not qualified to be a partaker of life, when they do confess that they have life at the present moment? It is just as if anybody were to take up a sponge full of water, or a torch on fire, and to declare that the sponge could not possibly partake of the water, or the torch of the fire. In this very manner do those men, by alleging that they are alive and bear life about in their members, contradict themselves afterwards, when they represent these members as not being capable of [receiving] life. But if the present temporal life, which is of such an inferior nature to eternal life, can nevertheless effect so much as to quicken our mortal members, why should not eternal life, being much more powerful than this, vivify the flesh, which has already held converse with, and been accustomed to sustain, life? For that the flesh can really partake of life, is shown from the fact of its being alive; for it lives on, as long as it is God's purpose that it should do so. It is manifest, too, that God has the power to confer life upon it, inasmuch as He grants life to us who are in existence. And, therefore, since the Lord has power to infuse life into what He has fashioned, and since the flesh is capable of being quickened, what remains to prevent its participating in incorruption, which is a blissful and never-ending life granted by God?

In short, theistic evolutionists and other modernists who maintain any credibility as Catholic theologians do so by professing their belief in at least some of the articles of the Creed that are just as supernatural as the first article of the Creed which they deny.

Through the prayers of the Mother of God, may the Holy Ghost descend upon all Church leaders and teachers and re-imbue them with supernatural faith—the Faith of St. Irenaeus, of St. Robert Bellarmine, and of all the Fathers and Doctors of the Church!

P.S.  Our webmaster Keith Jones would be very grateful for volunteers to help him with formatting our newsletter, articles, and other material on our website.  If you would be willing and able to help him with some of these tasks, please send me an email at howen@shentel.net and I will put you in touch with him right away.

P.P.S. We will hold our 2022 annual leadership retreat at the headquarters of the Apostolate for Family Consecration in Bloomingdale, Ohio, again this year, from Sunday, August 28, until Saturday, September 3.  For more information or to obtain a registration form, please email me at howen@shentel.net.