I have just returned from a three-week road trip that took me to eight different states in the Midwest where I was able to speak to many different groups of Catholics, in several churches, and on the campus of the Franciscan University of Steubenville at the invitation of the Juventutem group on campus. You can see the Steubenville presentation at this link. I would like to thank all of you who prayed for me.

Yesterday was the feast of St. Therese of Lisieux whom St. Pius X called “the greatest saint of modern times.” Thanks to the research of one of the members of our leadership team, Chris De Vos, we know that the Little Flower learned her Faith on the firm foundation of the traditional Catholic doctrine of creation through the Catechism of Perseverance by Monsignor Gaume, published in 1853. 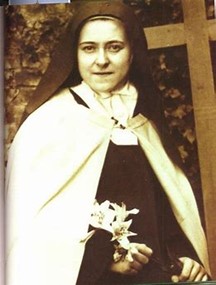 The Knowledge of God Considered in His Works

In the section on “The Knowledge of God Considered in His Works,” the Little Flower learned:

Q. What were the first words God spoke in creating the world?”

A. The first words God spoke in creating the world were these: “Let there be light.” These words, so simple and so immediately followed by their effect, “and there was light,” show us the all-powerfulness of God. He who is all-powerful does what He wishes merely by speaking.

Q. Could not God have created the world in a single instant?

A. God could have created the world in an instant, but in employing six days to make the earth out of nothing, and to arrange it in order, He wished to teach us that He is free to do as He pleases.

The Little Flower’s Catechism goes on to teach that God created all of the different kinds of creatures during the six days of creation, just as they are set forth by Moses in the sacred history of Genesis.  Along the way, Monsignor Gaume takes pains to make sure that his students learn the answer to a question that has stumped many of the most brilliant Catholic intellectuals of modern times when they attempt to answer it from their knowledge of human science without reference to divine science and the Sacred Tradition of the Church:

Q. Why were the sun, moon and stars not created until the fourth day?

A. They were not created until the fourth day, in order to teach man that they are not the authors of the productions of the earth. God wished thereby to prevent idolatry.

Q. What further do you remark with respect to the sun?

A. I remark that the sun rises and sets every day, runs his course with great velocity, illumines and vivifies all nature. It is in this an image of Christ, who, having gone forth from the bosom of His Father, returned to heaven, after having enlightened all men by His doctrine, and sanctified them by His merits and example. 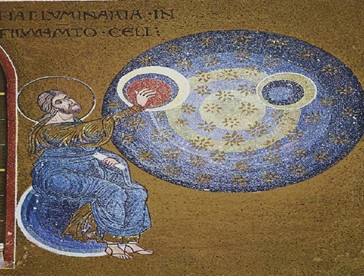 The brilliant Hungarian theologian and scientist, Fr. Stanley Jaki, O.S.B., was only one of a host of modern Catholic intellectuals who have argued that since there cannot be days without the sun, and the sun, according to Genesis One, was not created until the fourth day, therefore the days of Genesis One cannot be taken literally as twenty-four-hour days. Those who take the teaching of the Fathers more seriously than the wild speculations of contemporary astrophysicists know that St. John Chrysostom and other Fathers had solved this “problem” just as Monsignor Gaume did. They knew that God used the "light" that He created on Day One to alternate with darkness to create the day-night-cycle, just as He used a miraculous "pillar of fire" by night and a pillar of cloud" by day to mark the day-night cycle for Moses and the Hebrews in the wilderness.  (That is why Moses tells us that God created the sun "to rule the day" on the fourth day of creation, something that would have been impossible if the "day" did not already exist!)  Moreover, they knew as well as Monsignor Gaume did that the verdict of history confirmed the wisdom of God’s decision to create the sun on the fourth day and reveal that to Adam—since societies that forgot the Genesis revelation handed down from Adam to the Patriarchs frequently fell into idolatry, worshipped the sun as the source of life, and even offered human sacrifice to the sun, as did the Aztecs in Mexico before the arrival of Cortes and the apparition of Our Lady of Guadalupe.

The Apple of God’s Eye

The Little Flower was not only taught the creation of all things by God in six days as set forth in the sacred history of Genesis; she was also taught the chronology of the world derived from the inerrant genealogical data in the Old Testament:

To close the heart of man against despair, and afford him patience during four thousand years, a Redeemer is promised.  Scarcely is he fallen when the words of God to the serpent, her seed shall crush thy head, announce to him the consoling tidings.  Adam comprehends this first promise, and transmits it to his children, as the only hope of the human race, for two thousand years. The second promise is made to Abraham and fixes the fulfillment among his descendants. 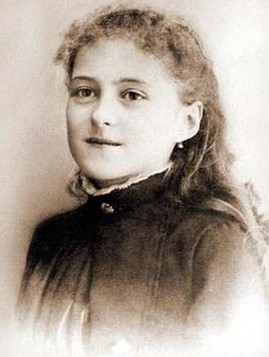 Unlike most Catholic children in the “developed world” today, from this traditional catechesis the Little Flower learned the truth that God had created everything for her from the beginning of time and that she was “the apple of His eye,” living in the spiritual capital of the entire created universe.  Indeed , it would be well-nigh impossible to practice her “Little Way,” trusting in God’s infinite love and offering up all of one’s acts with Jesus to God the Father in obscurity and littleness, if one had been taught to believe—as most Catholic young people are today--that the Earth is just a speck of dirt in a remote corner of an infinite universe and that the god of evolution only arranged for man to evolve as an after-thought, after billions of years, through a process involving hundreds of millions of years of death, destruction, deformity and disease.

The Last Temptation of St. Therese

One of the reasons why it was so appropriate for St. Pius X to call the Little Flower the “greatest saint of modern times” is known to relatively few Catholics; yet it is of great importance because it concerns the last temptation of St. Therese as she lay dying—a temptation that she suffered on behalf of the whole Mystical Body of Christ, at the very time when this temptation began to assail Catholic Church leaders and intellectuals with overwhelming force.  At the end of her life St. Therese confided:

If you only knew what frightful thoughts obsess me. Pray very much for me so that I do not listen to the Devil who wants to persuade me about so many lies. It is the reasoning of the worst materialists that is imposed upon my mind. Later, unceasingly making new advances, science will explain everything naturally. We shall have the absolute reason for everything that exists and that still remains a problem, because there remain very many things to be discovered.

Science will explain everything naturally.” “We shall have the absolute reason for everything that exists.” These are the very premises that undergird every form of evolutionary thought, the theistic and the atheistic. In total contradiction to the Ancient Faith that was handed down to St. Therese from the Apostles which told her that the origins of man and the universe had been completely supernatural from beginning to end and that the natural order had only begun when the entire work of creation was finished, the devil and his minions tormented the Little Flower with the same temptation that they were using and have continued to use to deceive so many Catholic intellectuals and Church leaders.  By succumbing to this very temptation, most of them have come to believe that it is possible to give a naturalistic explanation for the origin of all of the different kinds of corporeal creatures, thus exalting fallible human science above the divine science of Theology and above God’s Revelation in the sacred history of Genesis as it has been understood in God’s Church from the beginning.

Through the prayers of St. Therese of Lisieux, of our Guardian Angels, and of all the Saints, may the Holy Ghost grant to all Catholics, from the Pope and the Bishops to the lay faithful, the grace to resist the Little Flower’s last temptation as she did, and to defend and restore the traditional doctrine of creation as the foundation of our Holy Catholic Faith!

P.S.  Today is a First Saturday. To review Our Lady of Fatima's urgent request for keeping the First Saturday, please go to this link at the Fatima Center website.