One of the greatest obstacles to restoring the traditional Catholic doctrine of fiat creation as the foundation of our Faith is the fact that so many brilliant, learned and well-intentioned Catholics have embraced theistic evolution, especially during the last fifty or sixty years.  This tragic development becomes quite easy to understand, however, as soon as we realize that these brilliant, learned and well-intentioned Catholics have all embraced the Cartesian-Darwinian framework for studying the natural world, with its fundamental premise that the same material processes going on now have been operating in more or less the same way since the very beginning of the universe. By embracing this false framework, even the most brilliant, learned and well-intentioned Catholic scholars necessarily abandon the creation-providence framework that was used by all of the Fathers and Doctors of the Church to interpret the Mosaic account of creation and to study the natural world.  To help all truth-seekers to understand the vital importance of this framework for a correct understanding of the origins of man and the universe, we have just posted a new article on the Kolbe website entitled “The Creation-Providence Distinction: Forgotten Fundamental Doctrine of the Faith.”  We urge you to study the article carefully and to make use of it in your discussions with family, friends and acquaintances who have been taught to believe in theistic evolution.

Tomorrow, December 12th, Catholics of the Latin Rite and many Byzantine Catholics (specifically of the Ruthenian Church) would normally celebrate the great Feast of Our Lady of Guadalupe, and, once again, I would like to share some reflections on how the encounter between Our Lady and St. Juan Diego and the miraculous creation of her Image on the tilma parallel and bear witness to the original “immaculate creation,” which foreshadowed our Blessed Lady’s Immaculate Conception. 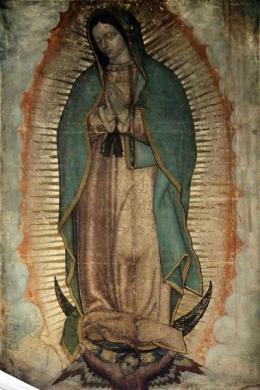 At that time, the indigenous people had been liberated by Cortes from the diabolical regime of Montezuma with its continual human sacrifice and cannibalism only to be subjugated by a new group of Spanish governors who abused and exploited the natives and brutally retaliated against missionaries who condemned them for their crimes. In view of the desperate condition of the Church and the growing likelihood of a bloody revolution by the natives against the tyrannical regime, Bishop Zumarraga had prayed to Our Lady for help and asked for a sign--Castilian roses which did not grow in Mexico.

At that time, in early December, on the mountains of Mexico, no flowers grew. But at their second encounter Our Lady directed St. Juan Diego to the top of the mountain where they had met, to gather the flowers that he would find there. At the top of the mountain he found not only the roses that Bishop Zumarraga had requested as a sign of Our Lady's intervention on behalf of the beleaguered Church--he found a total of seven different kinds of flowers, none of them native to Mexico, all of them native to the Holy Land, growing in the cold, rocky earth of Tepeyac Mountain. The Mother of God then arranged the flowers in Juan Diego's tilma, or cape, and sent him to the Bishop's residence, warning him not to show the flowers to anyone along the way. No one can explain in natural terms, how on the third day of creation all of the different kinds of plants sprang from the Earth at God's command. And no one can explain in natural terms, how seven different kinds of flowers native to the Holy Land bloomed in the frigid, rocky soil of Tepeyac Mountain. Only the creative power of God could make seven kinds of flowers bloom where they had never grown before, thus identifying the God of the Immaculate Lady as the Creator of heaven and earth, of the seas, and of all they contain.

St. Juan Diego continued on his way to the Bishop's house and arrived there after several hours. The Bishop's servants treated him badly and tried to get a look at whatever it was that Juan Diego held so tightly to his chest in the folds of his

tilma. They were amazed to find different kinds of flowers wrapped in the cape, and still more amazed to see them recede two-dimensionally into the fabric of the cape when they tried to handle them. When they reported this strange phenomenon to the Bishop, he gave orders for Juan to be brought to him. Arriving in the Bishop's presence, Juan opened his tilma and allowed the miraculous flowers to fall upon the floor in front of him; but the Bishop and his entourage suddenly beheld something still more wonderful than the miraculous flowers. As soon as Juan Diego opened his cloak, a perfect image of the heavenly Lady appeared--was created!--upon the tilma before their eyes.

Yours in Christ through Our Lady of Guadalupe, in union with St. Joseph,