The Satanic forces have used each successive revolution against the one, holy, Catholic and apostolic Church to impoverish and seduce the disciples of Our Lord. The Islamic revolution against the Church stripped away virtually all of the Church's Sacred Scripture and Sacred Tradition and replaced them with the Koran and the Hadith of Mohammed.   In the Protestant revolution, the Satanic forces cast aside most of Sacred Tradition and mutilated the Bible as it had been handed down from the Apostles. With the modernist revolution, the very idea of absolute and unchanging Truth has been abandoned.

One of the inspired books of the Old Testament excised from the Bible by the Protestant revolutionaries was the book of the Prophet Baruch, according to tradition the scribe of the Prophet Isaiah, of whose inspired writings we hear so much at this time of year.

Although not in the Hebrew Bible [Baruch] is found in the Septuagint and Orthodox Bibles . . . Chapter 6 is usually counted as a separate book, called the Letter or Epistle of Jeremiah.

Athanasius, Cyril of Jerusalem, Epiphanius of Salamis and Pope Innocent I listed the Book of Baruch as canonical.

The Decretum Gelasianum which is a work written by an anonymous scholar between 519 and 553 contains a list of books of Scripture presented as having been declared canonical by the Council of Rome under Pope Damasus I, bishop of Rome 366-383. This list mentions the book of Baruch as a part of the Old Testament Canon. 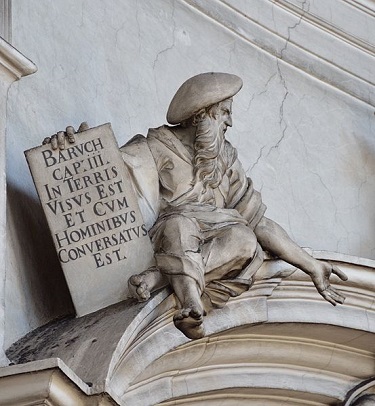 Like the other prophets, the Prophet Baruch exhorts his hearers to meditate on God's Law, day and night:

This is the book of the commandments of God, and the Law, that is forever: all they that keep it, shall come to life; but they that have forsaken it, to death.

But what is "the Law" that we should meditate upon day and night?

It is the Torah, the Pentateuch, the first five books of the Bible, in which Genesis stands at the head, forming the foundation of the Law.

What insights we would receive if we meditated on this Law, truly believing in its heavenly brightness!

The Prophet Baruch goes on to make this remarkable statement:

You have provoked Him who made you, the eternal God, offering sacrifice to devils and not to God (Baruch 4:7)

When we no longer sacrifice - offer the Holy Sacrifice of the Mass, the Most Holy Eucharist - to the God of Creation, then we, too, begin offering "sacrifice to devils and not to God." If you doubt the truth of this statement, please consider the words of Fr. Teilhard de Chardin, the most influential Catholic theistic evolutionist of modern times, as he describes the pivotal spiritual experience that he had as a young man which put him on the path to develop a "new Christianity" centered on evolution. Describing his experience in the third person, Chardin wrote: 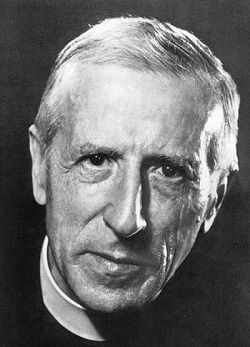 the Thing swooped down. . . Then, suddenly, a breath of scorching air passed his forehead, broke through the barrier of his closed eyelids, and penetrated his soul.  The man felt he was ceasing to be merely himself; an irresistible rapture took possession of him as though all the sap of all living things, flowing at one and the same moment into the too narrow confines of his heart, was mightily refashioning the enfeebled fibers of his being . . . And at the same time the anguish of some superhuman peril oppressed him, a confused feeling that the force which had swept down up him was equivocal, turbid, the combined essence of evil and goodness . . .

"You called me here: here I am" [said "the Thing"].  "Grown weary of abstractions, of attenuations, of the wordiness of social life, you wanted to pit yourself against Reality entire and untamed . . . I was waiting for you in order to be made holy.  And now I am established on you for life, or for death . . . He who has once seen me can never forget me: he must either damn himself with me or save me with himself."

Is there any Catholic who has preserved the flame of supernatural Faith who would dare to say that Teilhard's god is the God of Abraham, Isaac, and Jacob, the Father, the Son, and the Holy Ghost, and not a Satanic substitute?

Through the prayers of the Immaculate Conception, the Mother of God, may the Holy Spirit expose the diabolical deception of theistic evolution and lead us all into all the Truth!

P.S. During this holy season of Advent, the Kolbe Center would like to offer you a simple way to beautify your homes, delight your children and grandchildren, and reinforce the true Catholic doctrine of creation, by offering a magnificent 54-piece puzzle of the holy icon of the first day of creation from Monreale Cathedral for a donation of $15 or more to support the work of the Kolbe Center. When writing the icon of the first day of creation, it is customary for iconographers to show the Eternal Word bringing forth the angelic hierarchies and physical light simultaneously. In this way, the holy icon gives the lie to the many modern commentators who insist that "There could not be days without the sun," by reminding us that God created the light on the first day of creation to alternate with darkness to form the day-night cycle, continuing in that role until God created the Sun on the fourth day of Creation Week to "rule the day" that He had created on Day One.