Nativity of Our Lord Jesus Christ

Christ is born!  Glorify Him!

Today, we celebrate the Nativity of Our Lord Jesus Christ, the “last Adam,” who was supernaturally conceived and born of the Blessed Virgin Mary, just as the first Adam was supernaturally created from the “virgin earth” at the beginning of time.  As I write these words, news of the ever-increasing danger of full-scale war between the Russian Federation and the government of Ukraine reminds us that the promise of an “era of peace” made by the Queen of Peace at Fatima has not been fulfilled, and that we need to increase our prayers and sacrifices to hasten the Triumph of her Immaculate Heart, the consecration and conversion of Russia, and the era of peace for which we pray in a special way during the Christmas season.   On July 13, 1917, Our Lady of Fatima first spoke to the three shepherd children of the Consecration of Russia to her Immaculate Heart and showed the children a vision of hell.  Significantly, She did this after giving the children an experience of the indwelling grace of God, of the reality of their life in God and of God’s living presence within them. This was significant because only those who are united to God by grace with living faith—like the three children of Fatima—can effectively pray and sacrifice for others.

There are many reasons why the study of Biblical Greek is essential to a correct understanding of Sacred Scripture, even in relation to the true doctrine of creation.  One of the truths that jumps off the page of the Greek New Testament but lies concealed in the English text of the Bible is the difference between the two kinds of “life” that Jesus speaks of in the Gospel—the natural “life” of man, or “psyche,” and the supernatural “life,” or “zoe”—which is the very thing that Jesus tells us He came to restore to mankind by His Passion, death and Resurrection.  When Our Lord tells us that “greater love hath no man than to lay down his life for his friends” (John 15:13), He is speaking of “psyche,” the breath of life that is man’s through his human nature.  But when Our Lord says that He came that we might “have life and have it more abundantly” (John 10:10), He is speaking of “zoe,” the life of God, “zoes aioniou,” “eternal life.”  No English Bible highlights this distinction, so it is easy for modern readers to conflate the natural life with the supernatural life and place them both on the same level.  This might not seem to have much to do with creation and evolution, but it has everything to do with it. 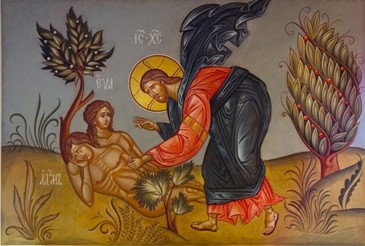 We know from “the sacred history of Genesis” and from the Sacred Tradition of the Church that Man was supernaturally created, body and soul, in the state of grace, so that His original and normal condition was to share one life with God.  This is why Evagrius of Pontus teaches that “the mind was created to pray.”  Indeed, it is abnormal for a man not to “pray without ceasing”!  When we think of man as having “evolved” into a world that arrived at the state it had achieved before the appearance of Adam through natural processes of death and destruction, through the culling action of predation, deformity and disease, we tend to think of his natural goods of intellect and will as those that raised him above the lower animals. While this is true as far as it goes, in an evolutionary context we easily lose sight of the fact that Adam was supernaturally created by God and for God, and that everything else was supernaturally created to serve him, in view of the foreordained Incarnation and Immaculate Conception.  If we forget this, we are easily led to feel that natural goods are the highest goods, and that obeying the natural law suffices to fulfill the purpose of our existence.

But that is a deception.

If we do not constantly remember the original state of our first parents when God created them, we cannot understand the nature of “normal” human life—that is to say, “normal,” divine-human life, the life that Our Lord and the Blessed Mother lived in every moment of their lives, a life lived in communion with God, that remained centered on God and His Kingdom at all times and in all places, in every thought, word and action. If we recall this continually, we will be less likely to fall into idolatry, making limited goods—like money, hobbies, sports, food, drink, entertainment, pets, and such things—gods that absorb precious time and energy that ought to be spent adoring God and extending His reign in the world. 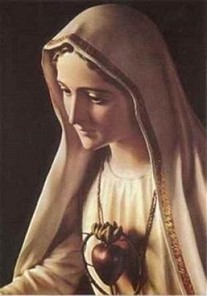 Towards the Consecration of Russia

Readers of this newsletter know that we teach that the principal “error” that took hold in Russia after the Miracle of the Sun was evolutionism.  It was the “scientific fact” of molecules-to-man evolution that made confident naturalists of Lenin, Trotsky, Stalin, Mao Tse Tung, Sanger, Kinsey, and the principal totalitarian leaders and godless social engineers of the twentieth century and of our own day.  Our Lady promised that when enough souls lead the same kind of consecrated life that She lived in every moment of her life on Earth, this will constitute “the Triumph” of her Immaculate Heart which will call down the grace for the Pope to consecrate Russia by name to the Immaculate Heart of Mary, which will in turn ignite an explosion of grace in Russia, making her a “light to the nations” and ushering in a great restoration of the Faith, the overthrow of anti-Christian naturalism, and an era of peace throughout the world.

In the book The Light Comes from the East, I have tried to explain why I agree with Bishop Athanasius Schneider and so many others that the Consecration of Russia has not been done and urgently needs to be done as Our Lady requested.  The book also explains why it is urgent that each and every one of us consecrate ourselves anew, seeking to do the perfect acts of love that Our Lord has prepared for us to walk in at every moment (cf. Ephesians 2:10) offering every thought, word, and action with Him to the Father with His intentions—as it is only in this way that the Immaculate Heart of Mary will triumph in us and the grace of the papal Consecration of Russia will be obtained.

So, as we approach the anniversary of Our Lady of Fatima’s request for the Consecration of Russia, let us ask ourselves: “Do we live one life with God?  Do we invite the Holy Ghost into all of our thoughts, words, and actions, doing each of them with Jesus and offering them to the Father with Him through the Immaculata?”  If we do, we are hastening the Triumph of the Immaculate Heart of Mary with each of our actions.  If we do not, with each wasted moment we are throwing away a Heaven-sent opportunity to hasten the Triumph and to save souls from slavery to sin and from eternal misery.

Before concluding this newsletter, I would like to announce the publication by Christ the King Books of a new textbook by Pamela Acker and colleagues entitled Biology: A Traditional Catholic Perspective.  This textbook is a Christmas gift to countless Catholic families who have long been hoping and praying for a textbook that gives a comprehensive treatment of biology in harmony with Catholic doctrine in faith and morals. In the words of veteran biology teacher, Daylight Origins Magazine editor, and internationally renowned defender of the traditional Catholic doctrine of creation, Anthony Nevard, “In my opinion, any student who absorbs the material in this book will be really well informed on the subject in preparation for higher studies, and for the challenges of life as an educated citizen and Catholic parent. I could see this being the definitive text for Catholic home schoolers and as a back-up and counterbalance at home for biology students subjected to secular courses in public schools.” In my judgment, it deserves to become a treasured reference work in the library of every Catholic college, school and home.

Orders for Biology: A Traditional Catholic Perspective can be placed through the Kolbe web store at this link.  We will do our best to ship orders received in the next 48 hours so that households in the U.S. will receive them in time for the traditional Catholic gift-giving day, the Feast of Epiphany.

Wishing you a most joyful and blessed Christmas season and New Year, I am