As we enter the holy season of Advent, it is good to remember the words of the incorrupt Benedictine monk, the Servant of God Dom Prosper Gueranger, on the four weeks of Advent.  As quoted by our colleague Chris de Vos in his monumental work Catholic Catechisms and Manuals on the Catholic Doctrine of Creation, at the beginning of the fifth chapter of the first volume of The Liturgical Year, the master liturgist writes:

With what gratitude ought they not to assist at that divine Sacrifice, for which the world had been longing for four thousand years! God has granted them to be born after the fulfillment of that stupendous and merciful oblation, and would not put them in the generations of men, who died before they could partake of its reality and its riches! This notwithstanding, they must earnestly unite with the Church, in praying for the coming of the Redeemer, so to pay their share of that great debt which God has put upon all, whether living before or after the fulfilment of the mystery of the Incarnation. Let them think of this in assisting at the holy Sacrifice.

…the world had been created, and the human race had dwelt on this earth full four thousand years, before the Son of God took to Himself the nature of man.

Then again, reflecting on the feast of the Immaculate Conception during the holy season of Advent, Fr. Gueranger exhorts his readers:

Let us listen once more to the salutation, and we shall find from its last words that Gabriel is announcing the fulfilment of the divine oracle and is addressing Mary as the woman foretold to be the instrument of the victory over Satan. ‘Blessed art thou among women.’ For four thousand years every woman has been under the curse of God, and has brought forth her children in suffering and sorrow: but here is the one among women, that has been ever blessed of God…that shall bring forth the fruit of her womb without travail.

In his reflections on the Feast of St. Barbara on December 4, the Servant of God explains that the four weeks of Advent are actually meant to be a liturgical re-living of the four thousand years from creation to the birth of Christ.  He writes:

The new birth of our Redeemer takes place after four weeks, as the first Nativity happened after four thousand years, according to the Hebrew and Vulgate Chronology.

In a previous newsletter we have shown that the liturgy of the Roman Rite consistently teaches that four thousand years elapsed from Creation to the Nativity of Our Lord, the only exception being the reading from the Roman Martyrology at Midnight Mass for Christmas which follows the Septuagint chronology by assigning 5,199 years from creation to the birth of Jesus.  According to the principle of “Lex Orandi, Lex Credendi,” “the law of praying is the law of believing,” Holy Mother Church allows us the freedom to believe in an age of the universe between four thousand years and the slightly longer Septuagint chronology, but Dom Gueranger demonstrates that the preponderance of the liturgical evidence favors the shorter chronology of four thousand years, which allows us to see the four weeks of Advent as a re-living of the four thousand years from Creation to the Birth of Our Lord.

“God Would Be a Deceiver”

In spite of the fact that the liturgy of the Roman Rite upholds the Biblical chronology, no element of the traditional Catholic doctrine of creation excites more scorn.  I remember about twenty years ago listening to a recording of a debate between Henry Morris, the founder of the Institute for Creation Research, and biologist Dr. Ken Miller, a prominent Catholic theistic evolutionist from Brown University, in which Dr. Miller insisted that “God would be a deceiver” if he created a world that appeared to be billions of years old, if it were actually much less than ten thousand years of age.  I have noted over the years that this particular argument seems to carry a lot of weight with many audiences.  However, this objection to the traditional Biblical chronology is one of many that are repeated again and again as if they were irrefutable when they are actually easily refuted.

At the request of many of our supporters, both priests and laity, we have prepared a small volume, the first in a series, in which we will present some of these common objections to the traditional Catholic doctrine of creation, along with answers that can be used to refute them.  What follows is one example from the soon-to-be-published little book:

“God would be a deceiver, if He made the world to appear billions of years old, when it is only 6000 years old!”

Since it is impossible to extrapolate from our observations of the natural world back to the beginning of the universe, we cannot determine the true age and origin of the universe with the tools of natural science.  The smartest scientists and engineers in the world, with the best laboratory facilities and an unlimited budget, would never be able to determine the true age and origin of a quart of the miraculous Cana wine by chemical analysis a few minutes after it was created.  The only way that anyone can know the true age and origin of the cosmos or of the Cana wine at the time that it was served is by believing the truthful witnesses Moses and St. John, appointed by God, as those witnesses have been understood in God’s Church from the beginning. 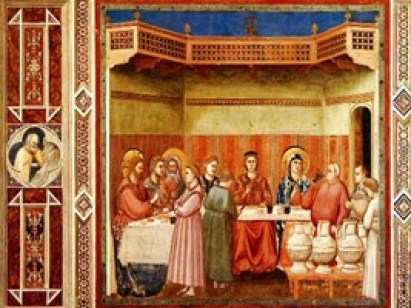 The Miracle at Cana

Since God created the world to be mankind’s home, He had to make a mature and fully functioning universe.  Since He created St. Adam and St. Eve to be the first parents of all mankind, He had to create them as a mature man and woman.  If one would have laid eyes on St. Adam a moment after his creation, he would have appeared to have passed through all the stages of development from conception to adulthood.  And yet he would just have been created a few moments before! But his appearance would only have been “deceptive” if God had not revealed to him (and to us) when and how He had created the world. In the words of dogmatic theologian Fr. Peter Damian Fehlner:

Appearances are deceptive only where no key to their interpretation is provided. Thus what looks like bread and smells like wine is bread and wine except where those elements have been "transubstantiated" into the Body and Blood of Christ by the consecratory action of a priest. There the appearances of bread and wine, real enough, indicate not bread and wine, but the Body and Blood of the Savior. This is known because God has told us so, that such power has been given to an ordained priest. So too in this case, the Creator, being the only witness to what happened in the beginning, has told us He made the stars and made them shine within a period of 24 hours, thus providing a key to the interpretation of the appearances "in the beginning."

Our little book of “Replies to Common Objections to the Traditional Catholic Doctrine of Creation” is just one of a number of exciting projects that we hope to finish in the near future. Please pray that we will be able to overcome the opposition of the satanic forces and complete at least a few of them in time to make them available to you by the great feast of Christmas.

P.S. Today is a First Saturday. Please be sure to answer Our Lady’s appeal for the First Saturday devotions as described by the Fatima Center at this link.

P.P.S. We are looking for an experienced reader who would be willing to record these newsletters for people who like to be able to listen to them.  If you would be willing and able to do this, please contact me at howen@shentel.net as soon as possible.