In this newsletter, I would like to highlight the fact that the true Catholic doctrine of creation is not only the foundation of our Faith; it is also the foundation for all effective evangelization, including the evangelization of Muslims.  As an example of how the doctrines derived from the sacred history of Genesis have the power to convert devout Muslims, I would like to share a brief excerpt from the spiritual autobiography of a devout Iranian Muslim which is now available as an e-book on the Kolbe website.  The author describes how she was stranded in London after the Ayatollah Khomeni Revolution in Iran and was exposed for the first time to devout Catholics—including her future husband, Gregory Clovis—and to Catholic teaching.  While staying at San Marino, a house for Catholic students in London under the spiritual care of a holy Jesuit priest named Fr. Hugh Thwaites, Maria’s life was transformed by the teaching she heard at a Legion of Mary Patricians group meeting that focused on the Creation and the Fall of Adam and Eve:

Now that I was back in England and immersed in an English-speaking environment, my command of the language went from strength to strength. Soon, I could understand a great deal. Greg wanted to show me as much of London as he could, and as we toured, we talked about the revolution in Iran and the coup d'état in Greg’s home country, St. Lucia. We seemed to stand on common ground, in agreement about the things that mattered in life. I continued to go to San Marino, where I was always greeted with joy and excitement. This gave me a sense of belonging, but the experience of meeting people from different parts of the world with their unique characteristics was all too new for me.

Life at San Marino revolved around four activities: the Holy Mass, the Holy Rosary (a meditation on the mysteries of the life of Christ whilst reciting the Our Father, ten Hail Mary's and the Glory be), an all-night vigil every first Friday of the month (a devotion spent in prayer until dawn) and the Legion of Mary (an association of Catholics who undertake spiritual works to evangelize the community). I was, however, intellectually and spiritually detached, without any interest or feeling for these things.

This all changed one day in January 1980, when I attended my first Patrician meeting. The Patricians were a Legion of Mary group whose monthly meetings featured a short talk on a preselected topic on the Faith, calculated to stir up controversy. The subject was then taken up by those present to spark a lively discussion. The meetings at San Marino were presided over by Fr. Thwaites or Fr. Lawson, but their role was that of an observer, allowing individual participants the freedom to express their opinions. Only at the end of the meeting would the presiding priest present the Church's teaching on the subject under discussion.

As it was my first meeting and I had very little knowledge of what was going to take place, I took the first seat by the door in the reception room. As in The Parable of the Guests in St. Luke’s Gospel, Persian culture assigns different weights to different locations in a room. Reflecting back on that day, I must have regarded myself as the least important person present, without wanting to be part of that meeting. I just watched people talking, and listened to what they said. What a pleasure it was to understand what was being said. People spoke with different accents. I listened intently, as my school training had taught me to do.

The title of the talk, as usual, had been selected at the previous meeting, probably well before Christmas, while I was still in Iran. I do not recall the exact title of the talk, but from the content it may have been “The Fall and the Redemption of Man” or perhaps “The Original Sin.” I had a superficial knowledge of the account of Creation in the Qur’an. My knowledge of religion was focused more on the precepts of Islam, rather than on the formation of the Universe and Adam and Eve.

I found the meeting most interesting. The facts regarding Adam and Eve and their predicament were from the book of Genesis in the Old Testament. It was not far from my knowledge of their story. However, there was a significant importance attached to the state of Adam and Eve before and after their disobedience. There were talking about 'Original Sin. This was not part of my religion or my knowledge; I had never heard of it before.

I had been reading the New Testament, which had brought me in contact with Christ. I had found myself completely taken by surprise. My instinctive reaction had been one of pride in my ignorance of Him. However, my recent acquired knowledge of Christ by no means had brought me to the understanding of Christianity. This talk confronted me with something that was all too new for me, and it rang with truth.

Adam and Eve were driven from the Garden of Eden after their fall. I learnt that from the time of the creation of the first man, Adam received the grace that made him a child of God. However, through his revolt and disobedience, he lost this divine gift for himself and all his descendants. This was the 'Original Sin,' and the stain of it was passed on to every human person born from the beginning to the end of time. It is thus the explanation for our tendency to evil, through cloudiness of our reason and weakening of our will, resulting from the effects of this Sin. But what resonated with me was that they were driven out of paradise and the doors were shut behind them. They had lost their right to Heaven and they had no way of return.

The meeting was interrupted with a break. We went to the dining area for a hot drink and some biscuits. People continued to talk to one another in a relaxed and uninhibited manner, as though they were brothers and sisters. They were free from the timidity and bashfulness that I was familiar with between the opposite sexes. After fifteen minutes’ break, we returned to resume the meeting. I had only heard half of it. I was now going to hear about the restoration of Man to the original plan of God.

For the first time in my life, I had heard about 'Original Sin.' And now for the first time in my life I was going to hear about God's eternal plan for the Redemption of Man and the mystery of the Incarnation. Man was condemned according to the justice of God to a double death, the physical death of the body and the spiritual death of the soul through the loss of eternal life. And now, according to His mercy, through a worthy Mediator, Man was restored to his original state of friendship and sonship.

I was most edified. My heart took a flight of joy. I understood what was being said and it made complete sense to me. I trusted everything as truth. This day, of which I don’t recall the exact date, was to lead me to a new understanding of God and the spiritual realms. Up to this moment, I had believed that I would gain Heaven by my prayer, submission to precepts of Islam and a good life.

Maria’s discovery of the life of grace soon led to her reception of the supernatural gift of Faith and her Baptism into the Mystical Body of Christ as a child of God.  Her conviction of the truth of the Catholic Faith was reinforced by her study of the Catholic doctrine of Holy Marriage, also derived from the sacred history of Genesis, which clearly showed that God had created one man for one woman for life from the beginning of creation.  Our Lord Jesus Christ clearly taught that Moses had allowed divorce because of the hardness of men’s hearts but that He had come to restore the original ideal of Holy Marriage that God had established “in the beginning.”  In the light of this truth, Maria could see the absurdity of the claim that Mohammed had been sent by God to “complete” the teaching of the Lord Jesus by restoring the very practices of divorce and polygamy that Our Lord had condemned and abolished! 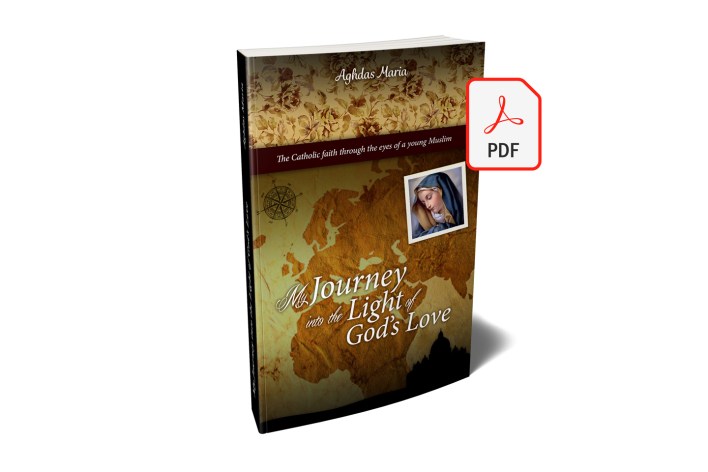 In previous newsletters, we have highlighted the truth that God created Adam and Eve as the King and Queen of the first-created world, and that this reminds us that we are called to establish the social reign of Christ the King and Mary our Queen throughout the world.  As one way to work toward this goal, we have joined together with other traditional Catholics to launch a Christ the King Service Network, to help traditional Catholics all over the world to provide each other with the goods and services we need, without being dependent on godless individuals, institutions and businesses.  If you would be interested in finding out more about the Christ the King Service Network, please send me an email at howen@shentel.net and let me know of your interest.  I will also be happy to tell you about an alternative to Fakebook that is now available to Catholics and which goes hand in hand with the Christ the King Service Network.