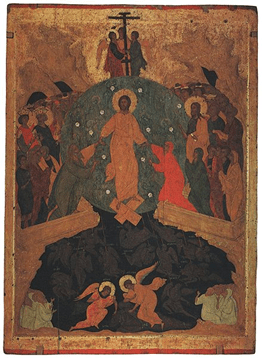 In the book published by the Kolbe Center on the cosmology of St. Hildegard of Bingen, The True Conception of the World, the author, Helmut Posch, concludes his account of the special creation of all things in St. Hildegard’s writings, with her vision of the Day of Judgment.   He writes:

In the third part of the book, Scivias, Hildegard saw the day of revelation. It is the Day of Judgment, the end of time . . . the world is on fire, hurricanes of inconceivable size sweep over the Earth, the elements dissolve, lightning and crashing thunder, mountains and forests tumble  down, so that the Earth is shaken and the life of every mortal being is exhaled. Then Hildegard hears a voice crying out:

“All you sons of men, you who lie in the Earth, arise!”

“See, all the bones of men instantly came together, wherever they had been on the Earth, covered with their flesh, and all men arose with unscathed limbs and bodies, according to their gender, the good gloriously radiant, the evil appearing black, whereby every work of each was openly visible in him. Some of them bore the seal of faith, others did not. Many of the sealed ones had a golden light on their face, others a shadow. That was their distinguishing mark.

Then suddenly a flash of lightning blazed from the east and I saw the Son of Man going forth in a cloud, appearing just as He did when he was in the world, with open wounds. The choirs of angels accompanied Him. The throne on which He sat was a flame that shone in glorious radiance but did not burn, and under Him was the violent storm of the cleansing of the world. Then the sealed ones were conducted by a whirlwind to meet Him in the air, there where I had earlier seen the radiance which symbolized the mystery of the sublime Creator. 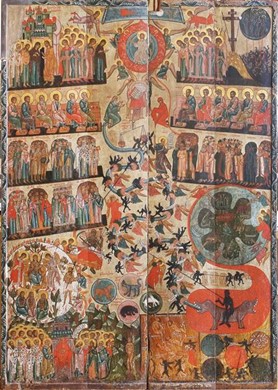 And there the good were separated from the evil. The Judge blessed with inviting words the just with the riches of Heaven, as the Gospel proclaims, and in a terrifying voice assigned the unjust to infernal punishment, as it is also written. Nothing more regarding their works was asked or answered here other than what the Word of the Gospel attests, because the work of each one, whether good or evil, was clearly self-evident. However, those who were not sealed stood far away, in the region of the north, by the masses of the devil. They did not come over to this court, but saw all this as in a whirlwind, and they anticipated the outcome of the judgment with bitter sighing.

After the judgment was thus executed the lightning and thunder and wind and storms ceased, and everything that was transitory in its elements suddenly faded away. And there was a great calm. Then all at once the chosen ones shone more brightly than the radiance of the sun. With the Son of God and the blessed throngs of angels they entered Heaven in great joy. But the damned with loud wailing went into the infernal abyss with the devil and his angels. Thus Heaven received the chosen, and hell swallowed up the reprobate.

Immediately there arose such a great joy and jubilant hymns of praise in Heaven and such a deep sorrow and loud cries of woe in the lake of the abyss, that human understanding cannot express it.

And at once all the elements lit up with the clearest brightness, as if a black covering had been removed from them. Fire knew no more burning heat, air no more compression, water no more violent boiling, Earth no more frailty. Sun, moon and stars gleamed in full luminosity and beauty in the sky like the most splendid jewelry. And they stood still (!), without circulating motion, so that they formed no more separation between day and night. It was no longer night. it was day. The end had come.”  (Sc. III/12)

St. Hildegard goes on to describe how all the blessed will be perfected and will be “mature in soul and body,” so that those of the blessed who were unjustly cut off early in their earthly life will reach the perfection for which they were created as surely as those who were allowed to live a normal life-span:

“Then a reddish, glowing sky and a purified Earth appear, since the elements of the world were purged from both of them. Whereas now the darkened sky forms a kind of occlusion, then the elements will shine in new splendor. Then a man, if he is numbered among the blessed, will be cleansed of these elements and will be like a golden circle of a wheel. Then he will be mature in soul and body, and all the seals covering the deepest mysteries will be opened. In this way the blessed adhere to God, and He will give them the fullness of joy.”  (R. L. 267) 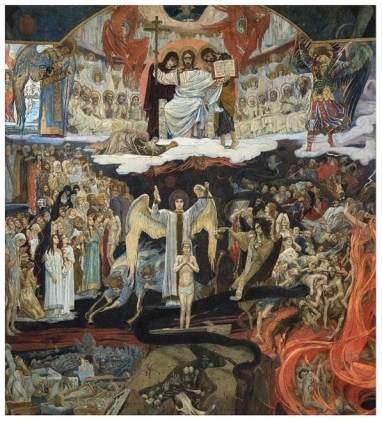 Just as God by His divine power created Adam and Eve in a state of physical maturity from the first moment of their existence and placed them in a perfectly harmonious cosmos that He had created for them, so at the end of time will He make up for what is lacking to the physical and spiritual perfection of the blessed and reestablish the whole creation in a permanent state of perfect harmony.  The theistic evolutionist who professes the Nicene Creed at Holy Mass every Lord’s Day acknowledges that he believes that God will do this instantaneously for every one of the blessed and that He will immediately establish the entire universe in a state of perfect harmony.  Why, then, can he not believe that God acted in the same way at the beginning of time?  As Posch explains:

The influence of the evil ones is finally overcome. The world has ceased to exist in its present form. There are neither vices nor temptations to resist. The new world is free from terrors and dangers.

“The number of righteous souls will be greater than that of the evil spirits because the place from which they fell will be filled with the souls of the righteous . . . ”  (B. F. 39)

After the Day of Judgment the new Earth is transformed into Paradise again and is saturated with heavenly light as it was at the beginning of the Creation. Heaven and Earth are once again in harmonious unity. It will be fulfilled just as John writes:

“And God shall wipe away all tears from their eyes: and death shall be no more, nor mourning, nor crying, nor sorrow shall be any more, for the former things are passed away.”  (Rev. 21:4)

Through the prayers of the Mother of God, of St. Hildegard, and of all the Saints, may God grant to all of us an unwavering faith in the Resurrection and an unwavering zeal to share that faith with everyone we meet.