Today we observe the great and Holy Saturday when Our Lord “rested” in the tomb on the seventh day of the week, having finished the work of Redemption with His death on the Cross.  The sabbath is a continual theme in the Holy Gospels, but contemporary commentators tend to focus on the conflict between the legalism of the scribes and pharisees and the new law of love that Our Lord proclaimed and exemplified.  But this perspective overlooks the deeper meaning of Our Lord’s healing miracles on the Sabbath, a meaning that directly relates to the first perfection of the universe and the distinction between the finished supernatural work of creation and the natural order of providence which only began when the work of creation was finished.  In the Catena Aurea, St. Thomas Aquinas quotes St. Augustine, who, commenting on the cure of the paralytic in St. John’s Gospel, Chapter Five, writes:

Our Lord openly says that the sacrament of the Sabbath the sign of observing one day out of seven was only a temporary institution, which had attained its fulfillment in Him: But Jesus answered them, “My Father worketh hitherto and I work,” as if He said, “Do not suppose that My Father rested on the Sabbath in such a sense, as that from that time forth, He has ceased from working; for He worketh up to this time, though without labor, so work I.”  God’s resting means only that He made no other creature, after the creation.   The Scripture calls it rest to remind us of the rest we shall enjoy after a life of good works here.  And as God only when He had made man in His image and similitude, and finished all His works, and seen that they were very good, rested on the seventh day: so do thou expect no rest, except thou return to the likeness in which thou wert made, but which thou lost by sin, i.e., unless thou dost good works.

This statement of St. Augustine is rich in meaning.  It reaffirms the universal teaching of the Fathers that God created all of the different kinds of creatures during the six days—whether they were six 24-hour days as the other Fathers held or an instantaneous creation, as St. Augustine mistakenly believed for reasons explained here.  He also compares the finished work of creation to the finished work of redemption which He completed on the Cross on Good Friday:

For He rested in His sepulcher on the sabbath, having on the sixth day finished all His work, inasmuch as He said, “It is finished.”  What wonder then that God, to prefigure the day on which Christ was to rest in the grave, rested one day from His works, afterwards to carry on the work of governing the world. We may consider too that God, when He rested, rested from the work of creation simply, i.e., made no more new kinds of creatures: but from that time till now, He has been carrying on the government of those creatures.  For His power, as respects the government of heaven and earth, and all the things that he had made, did not cease on the seventh day: they would have perished immediately, without His government: because the power of the Creator is that on which the existence of every creature depends. If it ceased to govern, every species of creation would cease to exist. 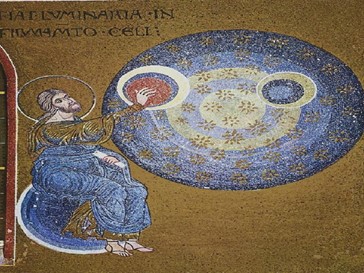 As we rejoice in Our Lord’s glorious Resurrection, let us then resolve to work harder than ever to help restore the faith of our Catholic brothers and sisters—and of all human beings—in the perfect goodness of God’s character, as shown forth in His work of Creation and in His work of Redemption.

P.P.S. I have been invited to speak to a chapter of the Chesterton Society in the state of Washington, to a parish community in Montana, and to the newly-founded religious community of the Sons of the Most Holy Redeemer in Montana during the first two weeks of May. If you know of any parish, school, or other community in Northern California, Washington, Montana or Oregon, that would be interested in hosting a Kolbe presentation during that period of time, please let me know as soon as possible.