Christ is risen! Truly He is risen!

One of the ways that God has shown His predilection for the Catholic Church has been by removing the most sacred relics of His Passion and Resurrection from her enemies and from His children who have separated from Her and placing them in the hands of her faithful children. The Sudarium that covered the Holy Face of Our Lord was saved from the Persian army and removed first to Alexandria and then to Oviedo in Spain in the seventh century; the Holy Shroud was saved from desecration by the Muslims and removed to Constantinople, only to be transported to France and then to Turin after the split between Old and New Rome. Icons associated with our Blessed Mother were similarly preserved. The miraculous image of Our Mother of Good Counsel flew from Albania to Gennezzano, in Italy, to escape the ravages of the Muslim Turks. In some ways most remarkable of all, the Holy House of the Holy Family in Nazareth was saved from sacrilege at the hands of Turks and transported by angels first to Dalmatia and then to Italy before coming down for a permanent landing in Loreto. 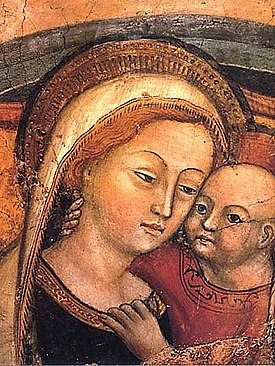 Our Lady of Good Counsel

All of these relic rescues redound to the glory of the Roman Catholic Church. And yet Our Lady of Fatima's request for the consecration of Russia reminds us that the East holds the key to preserving the meaning of many of these treasures. For example, the Roman Church possesses the Holy Shroud, but the naturalistic sacred art of the Church of the Roman Rite has become detached from its iconographic roots, devolving into portrayals of Our Lord that can be downright effeminate. Thus, while the Church of Rome possesses the Holy Shroud, it is the Eastern Churches that have preserved the true Image of the Holy Face in their Holy Icons, an image that matches the Holy Face of the God-man on the Holy Shroud so perfectly that the identification could be accepted in a court of law. 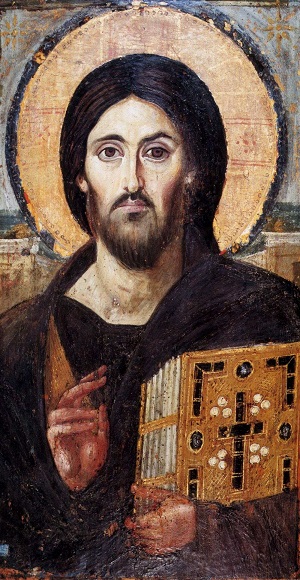 In 787 A.D., the seventh Ecumenical Council, the second of Nicea, defined that the icons approved by Bishops to be placed in churches teach with authority in accord with the teaching contained in the Word of God. Thus, all authentic Catholic icons of creation show - not the omnipresent mythical icon of human evolution embraced by Catholic theistic evolutionists - but Our Lord Jesus Christ the Eternal Word, speaking into existence the various kinds of creatures on the six days of creation. 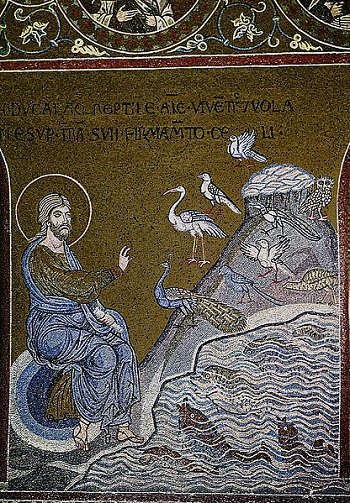 The holy icon most closely associated with Holy Saturday is known as the Harrowing of Hell. Like the beautiful text from the Roman Rite Office of Readings for Holy Saturday in which Our Lord Jesus Christ goes in search of Adam, this icon highlights the special relationship between Our Lord and our first parents, Adam and Eve. In the Holy Saturday reading, Our Lord addresses Adam in these words:

I am your God, who for your sake became your son, who for you and your descendants now speak and command with authority those in prison: Come forth, and those in darkness: Have light, and those who sleep: Rise.

I command you: Awake, sleeper, I have not made you to be held a prisoner in the underworld. Arise from the dead; I am the life of the dead. Arise, O man, work of my hands, arise, you who were fashioned in my image. Rise, let us go hence; for you in me and I in you, together we are one undivided person.

For you, I your God became your son; for you, I the Master took on your form; that of slave; for you, I who am above the heavens came on earth and under the earth; for you, man, I became as a man without help, free among the dead; for you, who left a garden, I was handed over to Jews from a garden and crucified in a garden.

Look at the spittle on my face, which I received because of you, in order to restore you to that first divine inbreathing at creation. See the blows on my cheeks, which I accepted in order to refashion your distorted form to my own image.

See the scourging of my back, which I accepted in order to disperse the load of your sins which was laid upon your back. See my hands nailed to the tree for a good purpose, for you, who stretched out your hand to the tree for an evil one.

I slept on the cross and a sword pierced my side, for you, who slept in paradise and brought forth Eve from your side. My side healed the pain of your side; my sleep will release you from your sleep in Hades; my sword has checked the sword which was turned against you.

But arise, let us go hence. The enemy brought you out of the land of paradise; I will reinstate you, no longer in paradise, but on the throne of heaven. I denied you the tree of life, which was a figure, but now I myself am united to you, I who am life. I posted the cherubim to guard you as they would slaves; now I make the cherubim worship you as they would God. 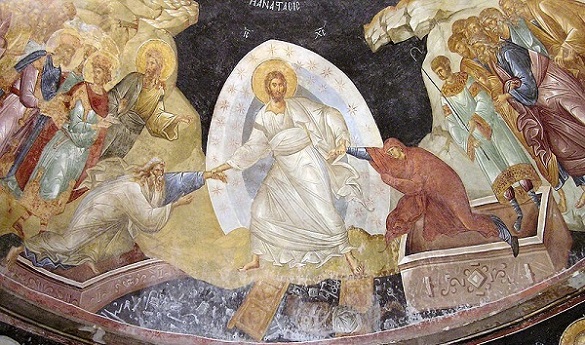 The traditional icon of the Harrowing of Hell also sheds light on a question that has long troubled the faithful regarding the relationship between Christian spouses in the world to come. When Our Lord said that souls in Heaven are not married or given in marriage but are like the angels in Heaven (Mark 12:25), did He mean that husbands and wives joined in Holy Matrimony will not have a special bond when they enter eternity? The Holy Icon of the Harrowing of Hell offers a resounding "No!" to that question. The icon tells us that Our Lord Jesus Christ went to liberate Adam and Eve, and that He liberated them together, as husband and wife - perhaps the longest-married couple in the history of the world - married, indeed, from the first to the last day of their lives! As we contemplate this holy icon, it should be a reminder that the bond of Holy Marriage will continue to exist in some way in eternity, even as it is swallowed up in the light of the beatific vision.

The marital union of Adam and Eve could be seen as a type of the union between the "Last Adam" and the "New Eve," Our Blessed Lady, a union which began at the instant of the Immaculate Conception and which continues in eternity. Through the prayers of the Immaculate Conception, may we be united to Our Risen Lord Jesus in every moment, so that the life-giving union that we experience with Him in time may continue uninterrupted in eternity.

P.S. We are planning a dramatic evangelistic outreach to the public near the Smithsonian Institution in Washington, D.C., on Sunday, May 19, to expose the evolution fraud and to proclaim the truth of Creation and of Our Lord's Life-giving Passion, Death and Resurrection. If any of our readers would be willing and able to come to Washington, D.C. for a day or two in April or May to participate in this project, please send me an email at howen@shentel.net If you live too far away to commute to the venue but would like to participate, we can find you a place to stay at our home in Virginia or with another family closer to Washington, D.C. We will need at least a dozen volunteers to justify obtaining the necessary permit from the Department of the Interior so that we can carry out our plan successfully.

P.P.S. Our sixth annual leadership retreat will take place at St. Anne Retreat Center in Melbourne, Kentucky, from June 16 to June 22. The retreat is open to all Catholics (and their families) who are committed to advancing the mission of the Kolbe Center in their spheres of influence. If you would like more information about the schedule, facilities, and suggested donations for the retreat, please email me as soon as possible at  howen@shentel.net.