Fr. Teilhard de Chardin probably did as much to justify the liturgical revolution as anyone in the Catholic Church with his “new Christianity” based on evolution.  But did you know that he prayed, "O God, if in my life I have not been wrong, allow me to die on Easter Sunday"? — Read any biography of him and it will tell you that Pierre Teilhard de Chardin died of a heart attack on April 10, 1955, at 6 p.m., after attending Holy Mass on Easter Sunday.  Thus, his disciples conclude that his prayer was answered in the affirmative.

According to God’s time, according to Liturgical Time, did he die on Easter Sunday?

According to God’s time, according to liturgical time, according to the daily rhythm established by God Himself in the Hexameron, Fr. Teilhard de Chardin died on Easter Monday, at the hour of Vespers, when the Church prays as She has done for almost 1500 years:

Blest Creator of the light
Who mak'st the day with radiance bright.
And o'er the forming world didst call
The light from chaos first of all;
Whose wisdom joined in meet array
The morn and eve, and named them Day:
Night comes with all its darkling fears;

Regard Thy people's prayers and tears.
Lest, sunk in sin, and whelmed with strife,
they lose the gift of endless life.
While thinking but the thoughts of time,
They weave new chains of woe and crime.
But grant them grace that they may strain
The Heavenly gate and prize to gain:
Each harmful lure aside to cast
And purge away each error past. 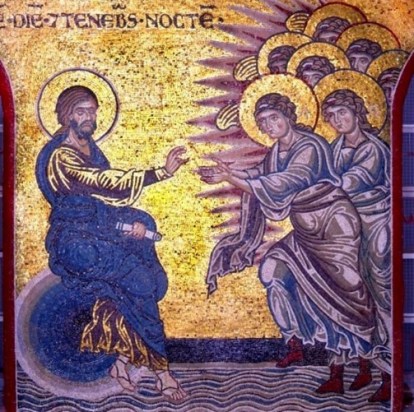 And can it be a coincidence that the prayer of Vespers that sums up the work of Monday, the second day of creation, the day on which, liturgically speaking, Fr. Teilhard de Chardin met his Maker, includes these words:

Pour forth now, most gracious Lord,
The gift of Thy never-failing grace,
Lest by the misfortune of some new deception
The old error should overwhelm us.

The words in bold appear remarkably prophetic in relation to Fr. de Chardin’s errors, since, as anyone who reads St. Irenaeus’s second-century work Against Heresies can attest, the evolutionary account of the origins of man and the universe is a very “old error” indeed and was widespread in the days of the Apostles and Church Fathers.  Thus, for those who have eyes to see and ears to hear, the prayer of Fr. Teilhard de Chardin was answered—in the negative!

May God have mercy upon him!

In the article at this link and in many of our conferences and publications we have shown how the traditional liturgical prayers of all of the authentic liturgies of the Catholic Church teach the literal historical truth of the sacred history of Genesis.  This extends even to the traditional orientation of the priest who offers the Holy Sacrifice of the Mass, since in all of the liturgical traditions of the Catholic Church the priest leads the people of God in facing East.  St. Basil the Great, Father and Doctor of the Church, teaches explicitly that the priest offering the Divine Liturgy faces East because that is the “direction of Paradise.”   Thus, the Church faces a symbolic East, if not a literal, geographical East, as a constant reminder that through the Holy Sacrifice of the Mass and the work of Redemption and Sanctification the whole creation is being restored to its original goodness and brought to an even more wonderful perfection at the end of time.

The Traditional Liturgy and the Doctrine of Creation

This is one of the reasons why we find that the traditional Mass and the traditional doctrine of creation go hand in hand.  In Uganda, in particular, we have seen how many of those who have embraced the traditional doctrine of creation as the foundation of the Faith have also embraced the traditional Latin Mass.  In God’s Providence, our good friend Fr. Christophe Nouveau of the Institute of the Good Shepherd, has been offering the Traditional Latin Mass in Kampala, the capital of Uganda, for several years, and he has even been granted permission to offer the TLM in the cathedral of Kampala every Sunday.  Since his arrival in Kampala, Fr. Nouveau has undertaken exhaustive research into the history of the Church in Uganda, the role of the Traditional Liturgy in the evangelization of the people, and its integral role in the education and spiritual formation of the Catholic community.  Having completed a master’s thesis on this subject at Makerere University in Kampala, Fr. Nouveau has now published his  thesis as a book under the title The Role of the Traditional Latin Mass in the Evangelisation of the Catholic Church in Uganda (1879-1969).  In the introduction to his book he writes:

The general objective of this book was to investigate how the Traditional Latin Mass essentially facilitated the evangelizing work of the missionaries. Deriving from the general objective, the specific objectives were: to analyse the background social and religious factors that enabled the adaptation of the local community to the Traditional latin liturgy; to examine the liturgical formation of the missionaries; to discuss the evangelizing strategies and techniques employed by the missionaries; and to assess the effectiveness of cultural assimilation of the Traditional Latin Liturgy. The scope of the research covered a period of 90 years, from 1879, the year of the advent of the first Catholic missionaries, to 1969, the year of the first ever papal visit to Africa, restricted itself to the Vicariate of Uganda that was under the charge of the ‘Missionaries of our Lady of Africa’ better known as the ‘White Fathers’. The Traditional liturgy was conceptualised under parish life, formation, works of charity and publications & architecture.

This research undertaken was primarily archival and library driven. Key among the primary sources were the missionary priests’ diaries. Other primary sources included documents from the Magisterium, regulations from the Roman Curia, formative liturgical and catechetical primers instructions and guidelines issued by the Missionary motherhouses or by Superior Generals, and devotional literature. Secondary literature, comprising scholarly sources, was also consulted. In addition, the researcher used structured interviews to generate qualitative data.

The findings established that the White Fathers made use of local social and religious factors emphasing commonality and convergence to evangelize the local communities through the Traditional Latin liturgy. It was also established that liturgical formation, which was rigorously implemented in liturgical teaching and catechesis, was informed by the centrality of the Traditional Latin Mass, in which God was glorified and man sanctified. Further, the findings illustrated how the building and blessing/ consecration of a Church, the solemnity and splendor in the Liturgy, observance of the rubrics, especially the reception of Holy Communion, and the publication of local liturgical documents were all conscientiously used as evangelization methodologies to promote a fervent liturgical consciousness among the local communities, which found its fullest expression in assistance at the Traditional Latin Mass. Lastly, the findings proved that the Traditional Latin Mass became culturally assimilated in the lives of the local population and was at the center of parish life, and the liturgical consciousness permeated all the activities of the Catholic Church and influenced the participation of Catholics in national life. The emergence of the native Catholic clergy to take charge of Traditional Latin liturgy sealed the success of cultural assimilation.

In his history, Fr. Nouveau demonstrates that some of the very characteristics of the Traditional Latin Mass that supposedly needed to be changed to make the Gospel and the Liturgy more “accessible” to non-European peoples were the very things that allowed the missionaries to inculturate the Holy Mass and the Gospel in the Kingdom of Buganda.   This is because the Buganda’s rites of worship, although false in their object, incorporated, among other elements, a holy priesthood, a sacred temple with a holy of holies reserved for priests, a sacred language used by the priests in their worship, and other elements which made it easy for them to recognize the Traditional Latin Mass as the fulfillment of their own liturgical rites, purged of all error and brought to perfection in Christ. If you would like to learn more about this important chapter in Church history and support the propagation of the Traditional Latin Mass in East Africa, you can order Fr. Nouveau’s book by using this link.