One of the most important things that we can learn about any person, group of persons, or group of things is their origin, their beginning.  In almost all Catholic schools and universities today students are taught that “the beginning” of the world occurred about 13.7 billion years ago and that the “beginning of the human race” did not occur until about anywhere from a few million to a hundred thousand years ago.  This false indoctrination goes a long way to explain why young people grow up feeling worthless in the sight of God, since we teach them that God brought human beings into existence as an after-thought.  And yet, since this false teaching so flatly contradicts Sacred Scripture, and the entire Tradition of the Church, including all of her liturgical traditions, even recent Magisterial documents cannot help bearing witness to the truth about man’s creation at the beginning of the world.

Scripture and Tradition Place Man at the Beginning of Creation

In the article on the Kolbe website “Does the Catechism of the Catholic Church Abrogate the Traditional Doctrine of Creation?” we show that while there are a number of ambiguous and somewhat confusing statements in some of the sections of the Catechism devoted to the doctrine of creation, there is nothing that cannot be reconciled with the prior authoritative teaching of the Church on Creation.  For example, in the Paragraph 1608, “In the beginning,” we read:

(CCC 1608) Nevertheless, the order of creation persists, though seriously disturbed.  To heal the wounds of sin, man and woman need the help of the grace that God in his infinite mercy never refuses them.  Without his help man and woman cannot achieve the union of their lives for which God created them “in the beginning” (emphasis added). 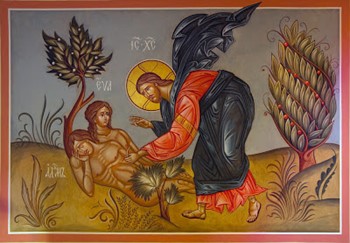 since the creation of the world God's invisible qualities, His eternal power and divine nature, have been clearly seen, being understood from His workmanship, so that men are without excuse.

The Fathers of the First Vatican Council recalled this verse when they defined that it is possible for human beings to know that God the Creator exists without a supernatural revelation.  In Chapter 2 On revelation, they defined that: 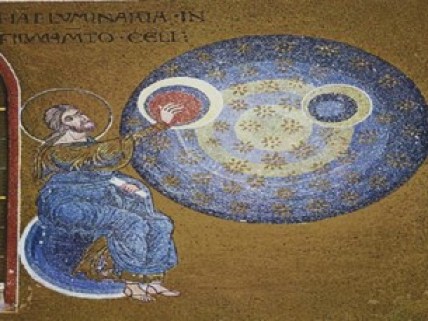 The Popes and Councils Place Man at the Beginning of Creation

Pope after Pope and Council after Council has joined the chorus of authoritative teachers bearing witness to man’s creation at the beginning of the world.  According to the Council of Arles in 475 A.D.:

From the beginning of the world , they [men] were not set free from the original slavery [of Original Sin] except by the intercession of the sacred blood (DZ 160b –Council of Arles 475) (emphasis added).

According to the Third Council of Valence in 855:

Those impious ones who from the beginning of the world even up to the passion of our Lord, have died in their wickedness and have been punished with eternal damnation . . . (Denz, 323, Council of Valence III, 855) (emphasis added).

Pope St. Leo the Great in one of his sermons on the Nativity of Christ, repeats the theme:

For the almighty and clement God, Whose nature is goodness, Whose will is power, Whose work is mercy, signified beforehand, at the very beginning of the world, as soon as the diabolical malice had killed with its envious poison, the remedies that He had prepared, in His mercy, for the restoration of mortal men; declaring to the serpent that there would come a woman’s seed Who by His own power would crush the exaltation of his noxious head; that is, he signified that Christ would come in the flesh, both God and Man, and, born from a Virgin, would condemn the violator of the human race by His incorrupt birth (emphasis added).

As recently as 1854, when Blessed Pope Pius IX defined the dogma of the Immaculate Conception, he bore witness to and upheld the continuous teaching of the Church on the time of man’s creation.  He wrote:

The Fathers and writers of the Church, taught by the heavenly writings, had nothing more at heart, in the books written to explain the Scriptures, to vindicate the dogmas, and to instruct the faithful, than emulously to declare and exhibit in many and wonderful ways the Virgin's most high sanctity, dignity, and freedom from all stain of original sin, and her renowned victory over the most foul enemy of the human race.  Wherefore, repeating the words in which, at the beginning of the world, the Almighty, announcing the remedies of his mercy, prepared for regenerating mankind, crushed the audacity of the lying Serpent, and wonderfully raised up the hope of our race, saying, "I will place enmity between thee and the woman, thy seed and hers," they taught that in this divine oracle was clearly and openly pointed out the merciful Redeemer of the human race--the only begotten Son of God, Christ Jesus, and that his Most Blessed Mother, the Virgin Mary, was designated, and at the same time that the enmity of both against the Serpent was signally expressed (emphasis added) (Apostolic Letter Ineffabilis Deus) (emphasis added). 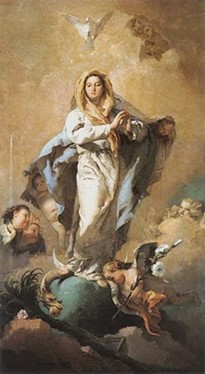 We have shown elsewhere that all of the liturgical traditions of the Catholic Church teach the traditional Catholic doctrine of creation and the literal historical truth of the sacred history of Genesis.  In light of the principle of “Lex Orandi, Lex Credendi,” their testimony to the creation of Adam and Eve at the beginning of the world adds a powerful confirmation to the authoritative statements mentioned above.  In the Byzantine Troparia of St. John of Damascus, Father and Doctor of the Church, the Holy Ghost teaches:

In the beginning you made man in your image and likeness.  You placed him in paradise and gave him power over the whole world. But he was deceived by the devil and transgressed your command by tasting of the forbidden fruit.  You sentenced him to return to that dust from which he had been taken:  wherefore we pray to You, O our God, to grant peace and rest to the soul of your departed servant. (Seventh Tome, Troparia of John of Damascus, Byzantine Daily Worship, p. 988) (emphasis added).

And in the Byzantine Hymns for the Dead, the faithful sing:

O Most Immaculate Mother of God, He who from the beginning formed Eve, our first Mother, from the rib of Adam, took flesh in your very womb . . . (Prayer Hymns for the Dead, First Ode, Byzantine Daily Worship, p. 997)

O Saviour, You created me at the beginning to be a citizen of paradise and a tiller of the earth . . . (Prayer Hymns for the Dead, First Ode, Byzantine Daily Worship, p. 996) (emphasis added).

Like the Maronite Liturgy, the ancient Coptic Liturgy explicitly bears witness to man’s creation “in the beginning” on the sixth day of creation:

In the beginning, God created Man o­n the sixth day of creation. It was also o­n the sixth day that Adam and Eve sinned, and fell from the presence of the Lord. Humanity was condemned to death and eternal separation from God. For this reason, mankind became in need of a redemptive death to purify all people of sin. God the Logos accepted this upon Himself, and took the body of Man; and was incarnate of the Virgin Mary through the Holy Spirit.

And in the beautiful traditional prayers for weddings in the Roman Rite, the Holy Ghost again confirms that man and the universe were both created “in the beginning.”

Father, by Your power You have made everything out of nothing.  In the beginning, You created the universe and made mankind in Your own likeness (Ritual Mass – Wedding Mass).

In the face of such a continuous, unanimous, and constant witness to the truth of man’s creation “at the beginning of the world,” it is not surprising that even the Fathers of the “pastoral council” Vatican II could not help lending their voices to the chorus:

By the work of his hands and with the aid of technical means man tills the earth to bring forth fruit and make it a dwelling place fit for all mankind; he also consciously plays his part in the life of social groups; in so doing he is realizing the design, which God revealed at the beginning of time, to subdue the earth (Cf. Gn 1:28) and perfect the work of creation (emphasis added).

The reference to Genesis 1:28 in connection with the phrase “at the beginning of time” shows that the Council Fathers—perhaps unwittingly—affirmed the constant teaching of the Pope and Bishops who preceded them by locating man’s creation at the beginning of the world—and not billions of years after a mythical cosmic explosion! 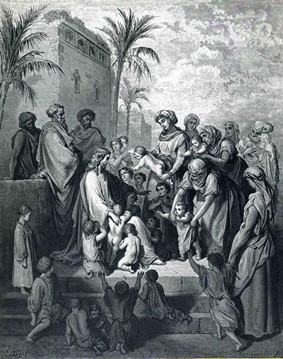 Few facts are more consoling to our children and grandchildren than the fact that our all-wise, all-powerful, all-loving God created everything for us in our first parents “from the beginning of the world.”  From this one fact children learn that THEY are the apple of God’s eye and that they have been the apple of His eye from the beginning. On that foundation it is not so hard for them to believe that the Son of God was willing to take a human nature and to suffer and die for their redemption, so that by their cooperation with the Holy Ghost as members of the Mystical Body of Christ, the harmony of the first created world can be restored and brought to an even more wonderful perfection in Him!