Readers of this newsletter know that the Kolbe Center has found its greatest base of support in the whole world among the Bishops, priests, religious and laity of the Church in Uganda.  If you are not familiar with the history of the Holy Uganda Martyrs who died to uphold the divine institution of Holy Marriage as set forth in the sacred history of Genesis, I encourage you to read the article at this link and to watch the play on the Holy Uganda Martyrs that we wrote and performed near the Holy Uganda Martyrs’ Shrine on our first trip to the “pearl of Africa.” 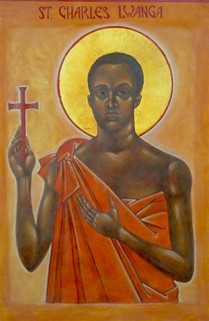 One of the reasons why the Holy Uganda Martyrs were willing to give their lives for the literal historical truth of the sacred history of Genesis is that they received their instruction in the Faith from what was probably the last generation of European missionaries to be totally free from any taint of modernism.  What many faithful Catholics in Europe and North America do not realize is that the same modernism that gradually took hold in virtually all of the seminaries in the so-called “developed world” by the middle of the twentieth century has also come to dominate the formation of Catholic seminarians in Africa for many decades.

Recently, I asked a non-Ugandan African seminarian to review some of the materials on the Kolbe website and he wrote back to me as follows:

The abandonment of the true and original Catholic doctrine of creation for theistic revolution on evolution is one of the top scandals that has resulted to the current crisis of faith in the Holy Mother Church and Christendom at large. It is now becoming weird when someone talks about the account of creation referencing the Bible.

Just like my fellow classmates, I was told in the seminary that the account of creation in the book of Genesis is nothing but a myth.

It was during a lecture that a priest said to us, 'You're just in year one now, and you may not believe or understand everything I tell you. But as time unfolds more truth will be unveiled to you.'

When Father said that to us, it was obvious we were all astonished and scandalized, so he made us to understand that this piece of information was for us alone and not for public consumption. He also told us that there are such secrets that will be revealed to us according to our stages of formation.

I wrote back to him that what his seminary professors are doing to him and his fellow seminarians now is what seminary professors in Europe and North America began doing to our seminarians in the 1930's!  But Our Lord is Truth Itself.  He said, "If you continue in My Word, you will know the Truth, and the Truth will set you free" (John 8:32). Thus, the moment that any priest rejects the smallest part of defined Catholic doctrine, he has lost supernatural Faith, and his priesthood easily degenerates into clericalism, with men entering the priesthood in the so-called “developing world” for a better education, opportunities to travel, and a higher standard of living, but not for the right reasons.

Many of you know African priests and support Catholic organizations that work in Africa. But have you made sure that these priests and organizations are actually upholding and transmitting the Catholic Faith, whole and entire?  As important as it is to promote the physical well-being of our brothers and sisters in Africa, what good will it ultimately do to improve their material lot, if those entrusted with their spiritual formation fail to teach and exemplify the true Catholic Faith, whole and entire?   If you are not certain that the African priests and organizations you support have kept the true Faith, a good place to start would be to ask the priests, religious and leaders of organizations that you support how they understand the origins of man and the universe and the Book of Genesis.  It could well be that by persuading them to watch the DVD series “Foundations Restored,” you will be God’s messenger, calling them back to the fullness of the Faith that was stolen away from them.

The first two episodes of the DVD series are available for viewing gratis on the DVD series website www.foundationsrestored.com But if you know any African priest, seminarian, religious or lay leader who would be willing to watch the entire DVD series, we will gladly provide them with a link so that they can view the entire series on the internet at no cost.  As the number of African Bishops, priests and religious who regain the fullness of the Faith that was stolen from them increases, we have good reason to hope that they will become a powerful force for the renewal not only of the Church in Africa but also in the so-called “developed world” where African priests and religious maintain an ever-growing number of parishes and schools, left unstaffed by the precipitous decline in answered vocations that has resulted from the imposition of modernism on several generations of seminarians. 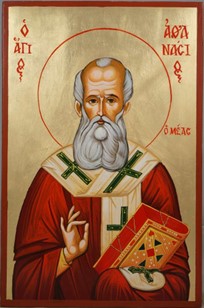 Yesterday, June 3rd, was the feast of the Holy Uganda Martyrs.  Let us pray through their powerful intercession for the restoration of the true Faith in Uganda and throughout the African continent, so that as the African Bishop St. Athanasius at the mouth of the Nile led the fight to restore the true Faith during the Arian crisis, so will the Ugandan Bishops and clergy at the source of the Nile lead the fight in the current modernist crisis to restore the true Catholic doctrine of creation—both as the foundation of the Faith and as the only firm foundation for a culture of life.

P.S. Today is a First Saturday. Please be sure to answer Our Lady’s appeal for the First Saturday devotions as described by the Fatima Center at this link.

P.P.S. We have decided to hold our 2022 annual leadership retreat at the headquarters of the Apostolate for Family Consecration in Bloomingdale, Ohio, again this year, from Sunday, August 28, until Saturday, September 3. For more information or to obtain a registration form, please email me at howen@shentel.net.