Feast of Our Lady of Mt. Carmel

Nine years ago, we held our first leadership retreat at the home of our great friend and colleague John Wynne, whose lovely wife Jennifer prepared our meals and was like a second mother to us.  For several years we returned to John’s home in the Missouri countryside for our annual leadership retreat, blessed by the attendance of several great priests, including Fr. Chad Ripperger, Fr. Thomas Hickey, Fr. Victor Warkulwiz, and Fr. Kevin Barrett, who gave lectures and offered Holy Mass for us every day.  Eventually, interest in the leadership retreat grew to the point that we had to move to a retreat center run by a Benedictine Abbey where we could accommodate all of the people who wanted to attend. 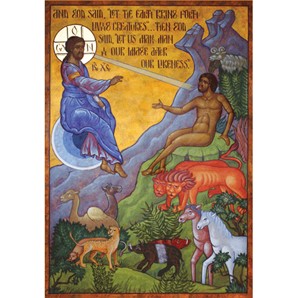 We have often observed that it is mostly men whom Our Lord calls to work in this apostolate—although we could do nothing without the prayers, work, and loving support of the wives, consecrated religious sisters, consecrated single women, and other women in our lives.  But it is fitting that men should be the ones to lead the fight for the restoration of the true Catholic doctrine of creation, because it is the traditional Catholic reading of the sacred history of Genesis that defines the true nature and calling of men to be the spiritual leaders of their families and of society.  Since most of the men who felt called to attend our leadership retreat had families, we saw the need to open up the retreat to families and children, primarily so that men would not be separated from their wives and children during their limited vacation time.  To provide for the needs of the children, we began to offer separate presentations for the children in the mornings and we began a tradition of involving the children in producing an original play on the life of a saint whose life was bound up with the true doctrine of creation in some way.

Over the years, my wife—with some help from others—has written plays on the life of St. Hildegard of Bingen, St. Bernard of Clairvaux, St. Dominic, Venerable Maria of Agreda, and St. Robert Southwell, the videos of which can be viewed at this link (password: kolbeplays)  and the scripts for which we would gladly make available to any home-school coop, school, or family that would like to make use of them.  We believe that this year’s play will be especially significant, because it presents the life and times of Blessed Anna Maria Taigi, Roman "wife, mother, and mystic" of the first half of the nineteenth century, a period when the Church was subjected to some of the worst trials She had ever endured, both at the hands of the Freemasonic forces and at the hands of Napoleon Bonaparte who was a type or foreshadowing of the final Antichrist.

It was also the time when modernists within the Vatican manipulated the Popes into removing the prohibitions or warnings against the promotion of heliocentrism by Catholic authors, without any formal explanation of this change in discipline--an error of prudential judgment that set in motion a chain of events that led eventually to the exaltation of fallible human science by Church leaders above the Word of God as understood in His Church from the beginning. In the midst of this crisis, Blessed Anna Maria Taigi exemplified the response requested by the Blessed Virgin Mary our Mother in her Church-approved apparitions: fulfilling the duties of her state in life, practicing penance, and making reparation for the sins of mankind.

At the same time, in another part of the world, a political leader also responded to the grace of God. That leader was the Russian Tsar Alexander I who defeated Napoleon's army with his scorched earth strategy and had a profound conversion to traditional Christianity in the course of which he became convinced that God wanted him to work for the return of the Russian Orthodox Church to full communion with the Roman Catholic Church. Blessed Anna Maria was shown all of these things in a mystical sun in which Our Lord revealed to her events occurring throughout the world as well as future happenings, down to our own day and beyond. Alexander I sent an emissary to Rome to negotiate the end of the Schism with Pope Pius VII, but Our Lord showed Blessed Anna Maria in her mystical sun that Alexander died while the emissary was in Rome, but in the grace of God and reconciled to the Church. Thus, Alexander I foreshadowed the prophesied future Tsar who will oversee the reformation of the Church in Russia, the end to the Schism, and the restoration of the Russian Orthodox Church to full communion with the Church of Rome.

As many of our readers know, I had the privilege of visiting Russia in 2005, at which time I recognized that the “consecration” of Russia did not mean the “fixing” of a broken nation but rather the activation of a potential for Russia to become a light to every nation on earth when Our Lady’s of Fatima’s requests have been completely fulfilled.   I elaborated on the insights that I received on the meaning of the Fatima consecration of Russia in the book The Light Comes from the East, and in a recent talk at a Fatima Center event in Northern Virginia, I tried to give a balanced perspective on recent and current events in Russia and Ukraine.  I believe that our play “’Wife, Mother and Mystic’: The Life and Times of Blessed Anna Maria Taigi, Faithful Daughter of the Church” will be a prophetic sign of hope and a great education for anyone who takes part in it, especially in regard to Our Lord’s providential plans for Russia, as prophesied by Our Lady of Fatima.

Two of the young adults who had planned to attend the leadership retreat and help my wife with the play in August have had to cancel their participation to fulfill their primary duties elsewhere.  If you or anyone you know is an 18-30 year old Catholic who believes in our mission and who would like to attend our leadership retreat at our expense and help with the play, please let me know as soon as possible at howen@shentel.net.

With deepest gratitude to all of our readers for your prayers and financial support, I am