From time to time in our newsletters we recall the connection between the original goodness of creation and the true character of God on the one hand and the link between disorders in nature and the Original Sin and subsequent sins of mankind on the other. In the article “The Difference It Makes,” we show how theistic evolutionism destroys the ability of Catholics to respond coherently to natural disasters.  As one part of the article explains:

The traditional understanding of Genesis confers hope. It gives Christians confidence that the same beautiful harmony that existed throughout the whole universe “in the beginning” will be restored “in the end” through the working of the Holy Spirit. It also strengthens men’s faith in the credibility of the prophecies of numerous canonized saints who have foretold a future flowering of Christianity before the final judgment and the end of the world when many of the characteristics of the first created world will be restored. The Christian who comprehends and believes in the patristic understanding of creation also has the capacity to reconcile the occurrence of death-dealing natural disasters with the absolute goodness of God who wills no evil. In light of the traditional understanding of Genesis, the faithful know that destructive natural disasters do not reflect the natural order as it came forth from God’s hands. Moreover, they understand that such disasters result directly or indirectly from the sins of mankind, and that they have a twofold purpose—first, to correct sinners, and, second, to bring them to repentance. According to the traditional doctrine of creation, the first created world operated in perfect harmony and subordination to Adam and Eve, so long as they in turn remained subordinated to the Divine Will. The course of nature as we know it today resulted from a curse imposed on nature by God after Adam’s fall. With this in mind, the traditional understanding inspires a fervent hope that each repentant sinner and divinized saint brings the world one step closer to the day when the wolf will lie down with the lamb. 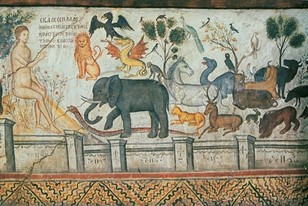 Theistic evolutionism cannot conceive of an original harmonious state of the universe, and thus either dismisses prophecies of a future restoration of the world before the final judgment or misinterprets them as referring to some kind of Teilhardian evolution of consciousness. In general, theistic evolutionism leads its adherents to believe that God deliberately ordained a struggle for existence and a process of natural selection as his means for producing the human body through secondary causes. For the theistic evolutionist, man-harming natural disasters, such as tsunamis, earthquakes, and volcanoes, are just part of the ordinary course of nature as created by God from the beginning. Consequently, the theistic evolutionist does not see the connection between natural disasters and men’s sins, and thus fails to interpret “the signs of the times.” Faced with the painful reality of natural disasters, he either lives in a constant state of denial that God uses such events to accomplish his purposes without regard to human sin, or else he falls into despair at the contradiction between such a god and the God of love revealed in the Bible.

In this newsletter, I would like to recall a concrete example of a saint of modern times who clearly saw the connection between sin and disorders in nature—St. Anthony Mary Claret, the founder of the Claretian Fathers.  St. Anthony was sent from Spain to Cuba as a missionary bishop in the middle of the nineteenth century, to restore order to the Church in that country.  Through many trials and tribulations, including a nearly-fatal attempt on his life, the holy archbishop spearheaded a complete reform of the Church. The following account describes his prophetic response to disorders in nature, first in the form of an earthquake and then in the form of a deadly disease.

It was August 20, 1852. Archbishop Claret was preaching a Mission in Bayamo, [Cuba], a town more than thirty leagues from the capital. One night the people noticed something extraordinary in the holy missionary. This strangeness was reflected in the pallor of his face and in the tremor of his voice. He began his sermon as was his custom, with full force, but at the most ardent and stirring point of his eloquence, he suddenly became silent; then directing himself to his audience, who looked at him in consternation, he pronounced these prophetic words:

"Let us pray to God for our brethren, residents of Santiago de Cuba, because they are in great tribulation. Tomorrow we shall go to console them."

"But what happened in Santiago?" An eyewitness writes in detail. He says: "A subterranean noise of thunder was heard, and from that moment everything moved; buildings vibrated; furniture in the rooms moved; window panes and doors creaked; houses and churches tottered and walls and roofs fell to pieces; the inhabitants were terror stricken, and not feeling secure in their homes, they went out into the patios, streets, and plazas. A glacial terror froze the blood in their veins. They stood still and remained silent, looking at each other without being able to explain what was happening. With a terrified voice they cried:

The Archbishop arrived. On seeing thousands of his children dispersed through the fields, the streets covered with debris, houses in ruins, the episcopal palace torn down, the churches crumbled, the Cathedral rent and the altars broken, moved to profound pity by the tragic sight of the catastrophe, he wept as Jesus wept over the ruins of Jerusalem. The domestics and the missionaries wished to console the archbishop; they wished to cheer him by telling him that the punishment of the earthquake would not be repeated. But he replied: 'They will return. It is useless to construct the cathedral and the houses. The earthquake will return soon. God wishes it. They are the great missionaries that God sends so that obstinate hearts, who do not wish to listen to words of love, may be converted.' "

The churches were still filled with debris. The stricken families had raised tents on the shores of the sea. They had also improvised a chapel under an immense covering. The pulpit was a platform and from it the holy archbishop preached a Mission.

Thousands of persons listened to him. His voice was sweet and sincere, threatening and terrifying, announcing simple Gospel truths and striking prophecy.

One day he made the following comparison: "God does with many of us as a mother does to a lazy sleeping child, she shakes the cot or bed so as to awaken him and cause him to arise. If that does not suffice, she whips him.

"God does the same with many of his children, lethargic sinners. He shakes their beds, that is, their houses, by means of earthquakes, saving their bodies and their lives. If that does not awaken them and they do not arise, He will give them blows, sending them the cholera and the pest. God has made that known to me."

These last words, pronounced with prophetic accent, frightened and moved the public, so that, amid sobs, they begged mercy and pardon of God.

"Only one month had passed," said an eyewitness, "since the archbishop had spoken, inspired by Heaven, of the punishment of the cholera which threatened the city, when the terrible infirmity already raised its empire of terror and death.

"Santiago was an immense hospital, where only groans of pain and anguish were heard. But in a few days it looked like a vast cemetery, whose tragic silence was sadly interrupted by the echo of funeral cars carrying heaps of corpses, or by the priest's rapid footsteps, hastening to a death-bed."

Very many,” wrote St. Anthony, “who refrained from confessing during the mission, have done so as a result of the earthquakes and the pest . . . I can do no less than bless Our Lord and return unceasing thanks that He sent the plague so opportunely, which I know to be clear evidence of His adorable mercy!”

Through the prayers of the Mother of God, of St. Anthony Mary and all the Saints, may the Holy Ghost restore the faith of His Church in Cuba and in the whole world in the true Catholic doctrine of creation, so that we can all once again recognize the signs of the times, repent of our sins, and work together to “restore all things in Christ.”

P.S. My itinerary for September is taking shape, but I would still be able to add additional venues if I hear from interested organizers soon. We are looking at tentative venues in the Cincinnati area around September 10-11, venues in the Tulsa, Oklahoma, area around September 12-15, venues in Wisconsin over the weekend of September 19, and venues in Michigan, Indiana, Ohio, and Pennsylvania on the way back to Virginia. If you would like to schedule a Kolbe presentation in your area that would fit into that general framework, please contact me at howen@shentel.net as soon as possible.