On Saturday, June 22, we concluded the seventh annual Kolbe leadership retreat at St. Anne Retreat Center in Melbourne, Kentucky, in the Diocese of Covington. One of the highlights of the retreat was the performance of The Light of Truth, an original play on the struggle of St. Dominic against the Albigensian heresy. My wife Maria Owen, Joseph Cole, seminarians Stephen Wetzel, and Alejandro Landin, and a host of other parents and volunteers worked with about 30 young people from three to eighteen years of age to stage, rehearse, and perform the play for all of the attendees with only three days of rehearsal - a small miracle, as anyone can attest who has ever tried to produce and direct a play!

The following information in the program notes explains why we wanted to highlight St. Dominic and the birth of the Dominican Order this year. If anyone would like to see an unedited video of the play, please email me at howen@shentel.net and I will be happy to send you a link.

The Light of Truth portrays the Church's struggle with the Albigensian heresy with special attention to the role of St. Dominic. The play closely follows the historical evidence but consolidates a few characters and compresses or transposes a few incidents in the life of St. Dominic and the infant Dominican Order for greater clarity. We will explain these examples of "poetic license" here, so that everyone in the audience may know the truth of the matter.

Count Raymond IV of Toulouse was one of the principal leaders of the First Crusade, but his grandson Raymond V refused to cooperate with the Pope in combating the Catharist heresy in the South of France. He was one of a number of aristocrats who bore the title count and who favored the heretical party in various ways. In The Light of Truth we consolidated all of these counts into the character of Raymond Roger of Foix who was probably the most vicious of them all. Nevertheless, it is by no means certain that Raymond Roger was directly involved in the murder of the Pope's legate Abbot Peter Castelnau as the script implies.

All of the miracles of St. Dominic portrayed or described in the play are well documented in reliable sources - except for the healing of the Count's henchman Martin which is a variation on a well-documented healing by one of St. Dominic's sons in the Dominican Order, St. Peter of Verona (St. Peter Martyr), who restored the foot of a young man who had cut it off in remorse for kicking his own mother! The apparition of a demon to St. Dominic in the form of an ape is well attested by a reliable witness - although the ape's little ditty is not! 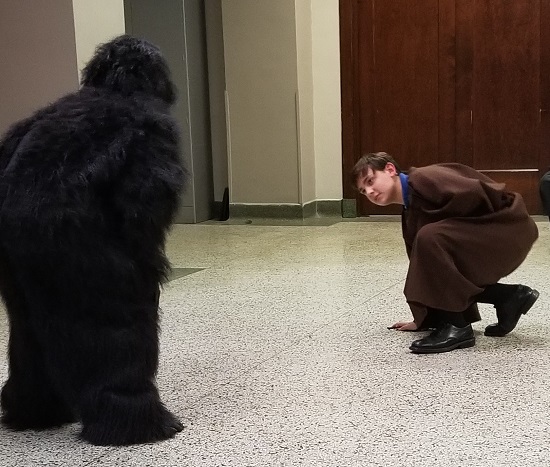 The tell-tale sign of the diabolical is not mere distortion of the good, the beautiful and the true - but total inversion. The fact that the Dominican Order leads the promotion of theistic evolution throughout the Catholic world represents such an inversion because - as The Light of Truth demonstrates - the Dominican Order was literally born of the struggle against a heresy very much like modern theistic evolutionism, a heresy rooted in the denial of the goodness of the original creation and a rejection of the sacred history of Genesis.

Through the prayers of Our Lady of the Rosary and of St. Dominic, may the Holy Ghost raise up champions of the true doctrine of creation from the ranks of the sons and daughters of St. Dominic, restore the foundations of the Faith, and usher in the Triumph of the Immaculate Heart of Mary, the consecration and conversion of Russia, and the greatest evangelization the world has ever seen!

We are confident that it is young Catholics like those who worked so hard to perform The Light of Truth - and who have been blessed to receive the Catholic Faith whole and entire on the foundation of the true Catholic doctrine of creation - who will lead the restoration of the Church and the evangelization of the world in the era of peace.

P.S. We expect to be granted a new permit for our outreach to the public near the Smithsonian Institution in Washington, D.C., on Sunday, July 28, to expose the evolution fraud and to proclaim the truth of Creation and of Our Lord's Life-giving Passion, Death and Resurrection. If any of our readers would be willing and able to come to Washington, D.C. to participate in this project, please send me an email at howen@shentel.net