In our travels around the world and in our interactions with the public via our website, it is amazing how certain questions and objections to the traditional reading of Genesis are raised again and again as if they were unanswerable, when these questions are almost always easily answered.  One of the most frequently raised objections to a straightforward reading of Genesis One is that the “days” of Genesis One cannot be literal, sequential 24-hour days because then there would be “a contradiction with Genesis Two.”  For good measure, we are often told that this apparent contradiction reflects that the fact that there were actually “two authors,” one the author of Genesis One and the other of Genesis Two. 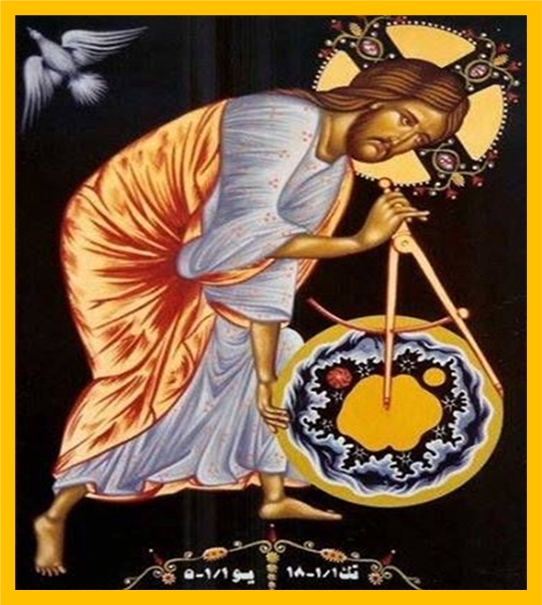 Is There a Contradiction Between a Straightforward Interpretation of Genesis One and Two?

In reality, the overwhelming majority of the Church Fathers and Doctors saw no contradiction at all between Genesis One and Genesis Two and would have considered it absurd to propose two authors for the two perfectly harmonious and complementary chapters of the sacred history of Genesis.  The great Belgian Jesuit exegete Cornelius a Lapide, drawing on his knowledge of all of the Biblical languages and on the work of all of the greatest Scriptural commentators in Hebrew, Latin and Greek, beautifully sums up the consensus view of the Fathers and Doctors on the relationship between Genesis Two and Genesis One in his Commentary on Genesis Two:

In this chapter there is an anacephalæosis [recapitulation or summary of known facts]: for instance, the formation of paradise was done on the third day, and the creation of Eve, as well as the institution of matrimony, was done before the Sabbath, on the sixth day, namely Friday, on which Adam was created. Moses therefore unfolds and fully explains these and other things that he, in passing, touched upon lightly in Chapter 1.

In light of this eminently reasonable consensus view, isn’t the arrogance of the exegetes who shaped the modernist consensus view of Genesis One and Genesis Two truly astonishing?  Did they really think that the Fathers who lived almost two thousand years closer to the time of Moses—some of whom, like St. Ephraim the Syrian, could read the text of Genesis in the original Hebrew and understand all of the nuances of the text—were morons who could not grasp an obvious contradiction between Genesis One and Two?  Such an arrogant attitude to the traditional reading of the Biblical text makes it almost impossible for contemporary Catholic exegetes to gain access to the treasures of Tradition or to receive the assistance of God’s grace in their Scriptural studies.

On the other hand, even the unlettered Catholic who approaches the sacred text with reverence for its divine origin and for the luminous legacy of Tradition, will receive the light that he needs to make sense of apparent “contradictions.”   Consider the fact, for example, that there are two versions of the Lord’s Prayer in the Latin Vulgate, the Church’s official text of the Bible.  In the Vulgate translation of the Gospel of St. Luke, Our Lord teaches His disciples to pray “Give us this day our daily bread” where “daily” is a translation of St. Jerome’s “quotidianum” or “every-day” in the Latin Vulgate.  But in St. Matthew’s Gospel Our Lord teaches the disciples to pray “Give us this day our ‘supersubstantial bread,’” where “supersubstantial” is a translation of “supersubstantialem” in St. Jerome’s Vulgate, which is, in turn, a translation of the original Greek word “ε̉πιούσιον,” a word that appears only here and in one other place in the New Testament.


Should we, like good modernists, assume that this “contradiction” proves that there are “inaccuracies” or “contradictions,” even in the Church’s traditional interpretation of the Lord’s Prayer as it appears in the Holy Gospels?  Or would we not rather follow in the footsteps of the Fathers and Doctors and ask the Holy Ghost to illuminate our minds to understand why He gave us these complementary translations of this most important of all prayers?  If we adopt the former attitude, we will go no further in our investigation.  But if we adopt the latter, by the grace of God we will be blessed with a new and much richer understanding of the text.

Cornelius a Lapide begins his commentary on “supersubstantial” in Matthew 6:11 by drawing out its literal meaning:

You ask what is supersubstantial bread? I reply the Greek is ε̉πιούσιον, which is found only here and in S. Luke 11:3 . . . Angelus Caninius ( lib. de Nom. Heb. N. Test.) translates to-morrow's bread, for ε̉πιουσια ημερα is often put for the following day. He would paraphrase the petition thus, "As on the day of preparation, or Friday, the Hebrews in the wilderness collected manna for the Sabbath, on which day they were to rest, so do Thou, 0 Lord, give us this day bread for to-morrow, for we are not solicitous for anything beyond, but after to-morrow we await, and as it were prepare ourselves for the Lord's Resurrection, and the eternal jubilee. Therefore, we collect our baggage, and only ask for bread for to-morrow. It is in favour of this that S. Jerome writes that the Hebrew Gospel of the Nazarenes reads מחר machar, i.e. "for tomorrow." Whence S. Athanasius (Tract. de Incarn. Verb.) thinks that we here ask for the Holy Spirit, who is the Divine Bread, whom we hope to feed upon and enjoy in Heaven, and whose first-fruits we receive and taste in the Eucharist.

2. S. Jerome explains ε̉πιούσιον by περιούσιον, that is principal, glorious, excellent. Symmachus translates elect, or that which is above all substances, and is superior to all creatures. So also Cassian (Collat . 9. 20), Cyril (Cat. Mystag . 5), and S. Ambrose (lib. 5, de Sacrament . c. 4), who by this bread understands the Eucharist which in Zech. ix. is called "the corn of the elect." (Vulg.)

3. Literally, ε̉πιούσιος , means that which pertains to substance, say substantial, essential , that which is for the preservation of man's life and substance, as often as is necessary. So S. Chrysostom, Theophylact, and S. Basil, as well as many others, who with Suidas interpret ε̉πιούσιον, as ε̉πὶ τὴν ημω̃ν ου̉σίαν καὶ τροφὴν ε̉παρκου̃ται, or that which is congruous to, and suffices for, our substance and nutrition, that which subserves, not pleasure but necessity, that which is not too delicate or abundant but frugal and moderate, i.e. daily. Hence the Syriac has the bread of our need; Arabic, bread sufficient. So, also the Egyptian, Ethiopic, and Persian versions. So also the Fathers who lived before S. Jerome's version, such as SS. Cyprian, Ambrose, Augustine, translate daily bread. And the Church in the Breviary and Missal uses the same ancient translation, and teaches the faithful to pray, Give us this day our daily bread.

Jerome, who, at the bidding of Pope Damasus, corrected the Latin version of the New Testament, in accordance with the Greek, in this place substituted supersubstantial for daily, to bring the passage into accord with the Greek. 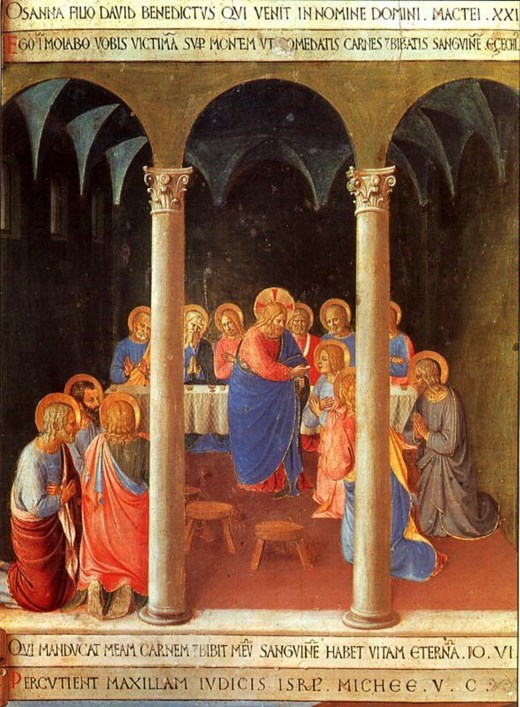 The Supersubstantial Bread IS the Holy Eucharist

So far, it would seem from Lapide’s commentary that our separated brethren would be justified in finding only a vague reference to the Holy Eucharist in St. Matthew’s inspired choice of words.  But Lapide has only laid the foundation for the most important part of his commentary:

Supersubstantial, or daily bread, is a parallel expression to the Hebrew דבר יום davar yom, "the thing, or matter of a day." For Christ forbids us to be anxious about the morrow, in which it is uncertain whether or not we shall be alive. "He would," says S. Chrysostom, "that we should be always girded, and provided, as it were, with wings of faith, by which we may fly heavenward, and give no greater indulgence to nature than necessary use demands." Again, S. Jerome's reason for translating ε̉πιούσιον literally, by supersubstantial, was to indicate that in this petition we ask above all for heavenly bread, such as we receive in the Eucharist.

2. You ask what is this special supersubstantial, or daily bread. Calvin (lib. 3, Instit. c. 20, 44), and Philip Melancthon, in his Commonplaces, tit. de Invocat., understand it of corporeal food only. Some Catholics understand it to mean only spiritual food. Certainly SS. Jerome, Cyril, Ambrose, Cassian, speak expressly of this alone, in the passages about to be cited. But I say that this bread is both material, for the sustenance of the body, and spiritual and heavenly bread, suitable for the nourishment of the soul, such as the word of God and the Eucharist. We have need of both, and therefore we ought to ask for both, and for the latter so much more earnestly than the former, as the soul is superior to the body. And this is denoted by the word supersubstantial, which S. Jerome explains to mean superexcellent, surpassing all created substances, because, as Cassian says, "the sublimity of its magnificence and its sanctity is superior to that of the whole creation." And for this reason, in the Greek, the definite article is added, doubled in truth, τὸν άρτον τὸν ε̉πιούσιον, the bread the supersubstantial. As though it were said, "Give us bread not common, but celestial and divine." Christ alludes to the manna given to the Hebrews, which was a type of the Eucharist. For of manna, it is said in Psalms 78:24 , "He gave them bread from heaven." "Man did eat angels' food." Thus, therefore, manna was food ε̉πιούσιος, i.e ., heavenly and angelic; but much more is the Eucharist. Whence in Wisd. xix. 20, both are called in Greek Ambrosia , which is said by the poets to be the food of the gods. S.Ambrose calls the Eucharist this supersubstantial bread. "If," he says, "this be daily bread, why do you receive it only once a year? So live that you may be fit to receive it daily." Thus the first Christians were accustomed to communicate daily, as is plain from Acts ii. 46. And S. Cyprian ( de Orat. Domin.) says, "We ask that this bread may be daily given us, lest we, who are in Christ and daily receive the food of the Eucharist, by the intervention of some grave fault, by abstaining and not communicating, should be kept back from the heavenly Bread, and separated from the Body of Christ, when He Himself has admonished us saying, 'I am the Bread of life, Who came down from Heaven. If any man shall eat of My Bread he shall live for ever.'" (S. John vi.)

Through the prayers of the Mother of God, may the Holy Ghost lead us all into all the Truth! Amen.