During the past week I have been privileged to meet with Catholic theologians and philosophers from several countries who want to renew the study of the traditional Catholic theology of creation. It is one of the first times that I have seen Catholic academics and university professors gather together to seriously study the traditional theology of creation.

Among the topics discussed were:

If you know of any Catholic theologians or philosophers who would be interested in participating in a similar study retreat in the future, please let me know.

Almost one thousand years ago, St. Bernard of Clairvaux preached against several heresies which bore many similarities to modern errors. During our recent leadership retreat, the children of the participating families performed a play about the confrontation between St. Bernard and Abbot Peter Abelard which anticipated the ongoing struggle between a humanist worldview whose starting point is skepticism and human science and the Catholic worldview whose starting point is the certitude of Faith and theological science. Abbot Abelard anticipated the theistic evolutionist mentality by denying the original holiness of Adam, the effects of Original Sin, and the necessity of Our Lord's work of Redemption to restore human nature. 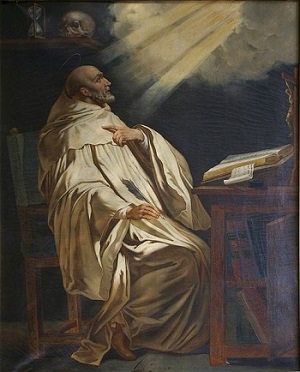 When Abbot Abelard was called to appear before the King of France, several Bishops, and St. Bernard of Clairvaux, St. Bernard confronted him with a number of heretical propositions that had been extracted from his writings. St. Bernard invited Abelard to defend, clarify, or renounce the propositions, but Abelard announced his intention to appeal to Rome and refused to respond. This prompted St. Bernard to write a letter to Pope Innocent II identifying the principal disorder at the root of all of Abelard's errors. He wrote:

The Abbot Abelard lifts his head to heaven, examines the lofty things of God, and returns to report to us the ineffable words which it were not lawful for a man to utter; and while he is ready to render a reason for all things, even for those which are above reason, he is presuming against both reason and faith; since what can be more contrary to reason than to strive by reason to go beyond reason? And what could be more contrary to faith than to refuse our belief to that which we cannot attain by reason?

Abelard stood near the head of a long line of Catholic intellectuals who would seek to render a natural explanation for things that have no natural explanation - most especially for the origins of man and the universe. But St. Bernard of Clairvaux saw clearly what we nowadays often forget - that it is impossible to defend a supernatural reality, like fiat creation or the Virgin birth, by offering a natural explanation. Indeed, he saw that to attempt to defend the revealed truths of our faith like the fiat creation of all things at the beginning of time with reason alone is to call into question the unshakable firmness of our faith:

Far be it from us to think, as this man does, that anything in our faith or hope is left suspended on a doubtful opinion, and is not rather founded altogether on the certain and solid truth, divinely attested by oracles and miracles, established and consecrated by the childbirth of the Virgin, by the blood of the Redeemer, by the splendor of His Resurrection. These testimonies are too credible for doubt. But if even they were at all less certain, the Spirit Himself beareth witness with our spirit that we are the sons of God. How, then, can anyone dare to say that faith is opinion; unless he is one who has not yet received the Spirit, or who ignores the Gospel, or thinks it a fable? . . . For faith is not an opinion; it is a certitude.

Just a little over a hundred years ago, in the same land of St. Bernard of Clairvaux and Peter Abelard, the young Carmelite nun who was called "the greatest saint of modern times" by Pope St. Pius X, St. Therese of Lisieux, experienced the worst temptation of her life as she lay dying. It was the temptation to which Abbot Peter Abelard had yielded and to which all modernists succumb, to one degree or another: 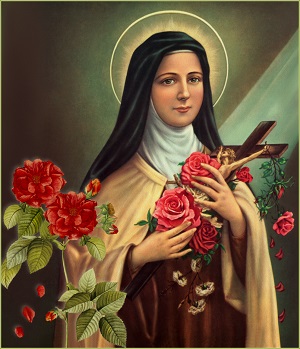 If you only knew what frightful thoughts obsess me. Pray very much for me so that I do not listen to the Devil who wants to persuade me about so many lies. It is the reasoning of the worst materialists that is imposed upon my mind. Later, unceasingly making new advances, science will explain everything naturally. We shall have the absolute reason for everything that exists ...

P.S. If you would like to see a video of the play "To Soar Above Reason" that was performed by the children at our leadership retreat, please contact me and I will send you a link.