Thank you very much for your prayers for Dr. Seiler and me during our visit to Uganda. We have already experienced the good effects of your prayers in many ways. I will try to give you a report in our next newsletter. In the meantime, I would like to comment on a current trend which appears to many Catholics to be positive, but which actually reveals the extent to which evolutionism has destroyed the foundations of authentic Catholic culture. 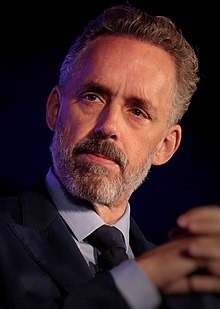 Many conservative Catholics read, watch and listen to the Canadian psychologist Jordan Peterson, because he is one of the few intellectuals willing and able to confront the pundits of the anti-culture of death in the public forum and to defend the importance of family, tradition and hierarchy against the cultural Marxists. It is also said that he takes the Bible - even Genesis - seriously, and that for this reason he deserves to be appreciated by serious Catholics. In this newsletter, however, I will show that Peterson's "traditional" values rest upon the same evolutionary foundations as the cultural Marxism he critiques, and that he needs Catholics - not to become his disciples but - to pray for him and to evangelize him with the one, holy, Catholic and apostolic Faith, on the foundation of the true doctrine of creation.

Like millions of other secular humanists, Peterson was brought up in a nominally Christian home, but he says that he lost respect for Christianity as a teenager when his religion teacher could not answer his questions about creation and evolution. To this day, he expresses contempt for Christians who take Genesis literally:

The poor fundamentalists, they're trying to cling to their moral structure, and I understand why, because it does organize their societies, and it organizes their psyche, so they've got something to cling to. But, you know, they don't have a very sophisticated idea of the complexity of what constitutes truth, and they try to gerrymander the biblical stories into the domain of scientific theory, promoting creationism, for example, as an alternative scientific theory, that just isn't going to go anywhere you know? Because the people who wrote these [expletive deleted] stories weren't scientists to begin with; there weren't any scientists back then!" (CMI, Commentary on Jordan Peterson Youtube Video, Lecture 1, around 1:31:31.) 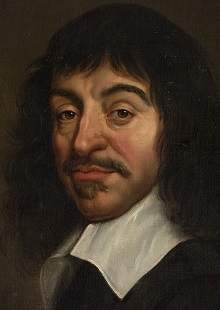 Readers of this newsletter will immediately recognize that Dr. Peterson identifies himself here as a faithful disciple of Rene' Descartes and the so-called Enlightenment philosophers. He shares their unqualified faith in the false premise that the same material processes that are going on now have been operating in more or less the same way since the beginning of the cosmos and that therefore natural scientists can legitimately extrapolate from their observations of nature in this fallen world to explain how everything came to be. Sadly, Peterson adheres to the bankrupt Documentary Hypothesis with equal confidence, even though it has been thoroughly refuted on many counts. Having made this off the cuff rejection of the literal truth of the sacred history of Genesis, Peterson then takes the Bible and Christian tradition "seriously," but only by giving them an interpretation all his own, based entirely on the "fact" of molecules to man evolution.

It is amazing to see an intellectual who has won the admiration of so many conservative Catholics embracing just about every element of evolutionary mythology with the faith of a child! This is all the more ironic when one hears Dr. Peterson speak condescendingly of Christians who place a child-like Faith in the literal historical truth of Genesis: 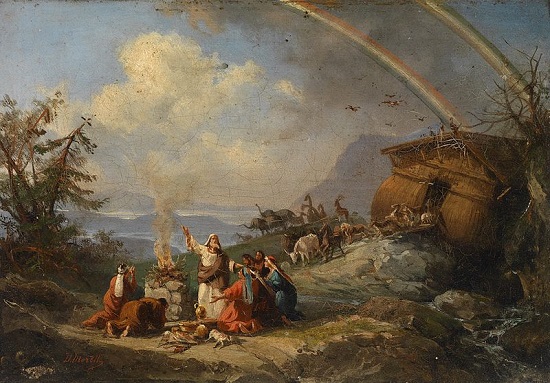 [W]e read [the Mosaic account of the Flood] you know, cynical modern people, we read it as if it was written by primitive people who thought that it was really the case that someone could build a boat, and put two of every kind into it, and thereby save the world. It's embarrassing to see things interpreted in a manner that shallow, especially by people who don't have ignorance as a justification . . . But if you're sophisticated, that doesn't mean you should dismiss it as if it's written for a child. Maybe you have an obligation to look a bit deeper and think for a moment that it wouldn't have been conserved for these many thousands of years if there wasn't something more to it than a casual intellectual dismissal would indicate. (Youtube, 5, 1:44:00)

In case after case, taking the Bible and Christian Tradition "seriously," for Peterson means using some of their content to support his views on the importance of certain characteristics that he associates with a healthy society and healthy men and women while making clear that his views on what constitutes "health" for individuals and societies rest ultimately on the "fact" of molecules-to-man evolution through mutation and natural selection.

The fact of evolution is self-evident. Random mutation and natural selection is the only way you can solve the problem of how to deal with an environment that's complex beyond your ability to comprehend. I think what you do is you generate endless variants, because God only knows what's going to happen next, almost all of them die because they're failures and a couple of them propagate and the environment keeps moving around like a giant snake. You never know what it's going to do next and so the best you can do is say "here's thirty things that might work" you know twenty eight of them are going to perish or if you're an insect the ratio is way, way higher than that.

Re: lobsters. These creatures engage in dominance behavior. When a lobster wins, he flexes and gets bigger....   The system that makes him flex is serotonergic. It's the same chemical that's affected by antidepressants in human beings. If you're depressed, you're a defeated lobster. If you give defeated lobsters serotonin then they'll stretch out and fight again. We separated from those creatures on the evolutionary timescale somewhere between 350 and 600 million years ago and the damn neuro chemistry is the same. And so that's another indication of just how important hierarchies of authority are, I mean, they've been conserved since the time of lobsters..... What constitutes real from a Darwinian perspective is that which is has been around the longest period of time. That this hierarchy has exerted selection pressure on human beings is not a disputable issue. How it's done and exactly what that means, we can argue about but that biological continuity is just absolutely unbelievable (ie: amazing). 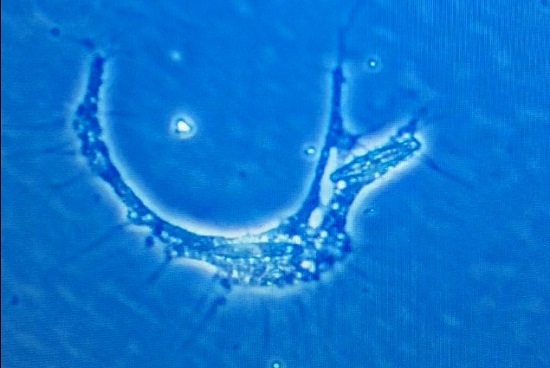 Peterson's faith in the ability of "struggle for existence" to turn an amoeba into a man must rival that of Richard Dawkins and the New Atheists! Even his respectful references to the Mosaic accounts of the Patriarchs in the sacred history of Genesis rest on Darwinian foundations:

As far as we know those are very, very old stories. They predate Judaism.... They are grounded in oral traditions which predate written traditions.   We know that oral traditions can last... up to 25,000 years. People remembered them and created them for reasons we really don't understand. The story of Adam and Eve, as far as I can tell, is the story of the coming of self-consciousness to mankind. Adam realized he was naked. I think it means that women make men self-conscious. I think it's the sexual selection force that women placed on men that drove rapid cortical development and the development of self-consciousness.

To argue that women's behavior "drove rapid cortical development" of men and women would seem to make the "effect" considerably "greater than the cause"! Yet these are the kinds of fantastic evolution-based statements that flow from the lips of this conservative icon. 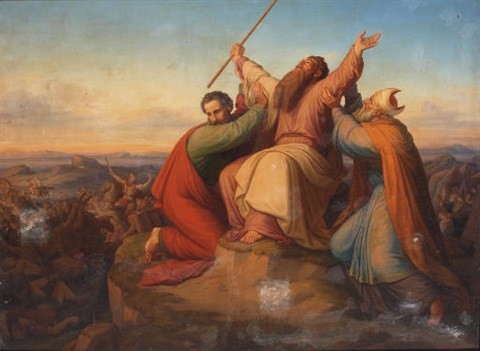 Like most intellectuals in the West today, Peterson is so disconnected from his Catholic Christian heritage that "taking the content of tradition seriously" leads to interpreting it without any understanding of or respect for its original meaning. For example, when speaking of an artistic representation of Aaron and Hur holding up the arms of Moses while he prays for God's blessing upon the Hebrews in their battle with the Amalekites, Peterson comments:

These were geniuses who created these pieces of work. It's not like they understood in an articulated manner exactly what they were trying to represent. But what they were representing were metaphors at the core of our culture. To the degree that our culture is functional and good, these are the metaphors upon which it is founded . . . [This one means] "Serve Tradition, serve the Father." (CMI, Commentary on Jordan Peterson Youtube Video, Lecture 3 at 1:35:38).

In reality, of course, the artist in this instance knew exactly what he was trying to represent. He almost certainly believed in the literal historical truth of the Pentateuch. Thus, he believed that this actual historical event illustrated the primacy of prayer over action, and that the image of Moses with his arms outstretched in intercession for his people foreshadowed the redemptive work of Our Lord Jesus Christ when He stretched out His arms on the Cross for our salvation. But all of this is lost on Peterson, who reduces its meaning to "Serve Tradition, Serve the Father."

The idolization of Jordan Peterson by many Catholics stands as yet another symptom of the collapse of Catholic culture, as a result - to a great extent - of the abandonment of the traditional Catholic doctrine of creation and the rejection of the literal historical truth of the sacred history of Genesis. It is time to stop celebrating poor secular substitutes for Catholic heroes and to restore the foundations of the Faith. Please continue to pray that the DVD series "Foundations Restored" will be ready for world-wide distribution by October 1st, the Feast of St. Therese of Lisieux, the Patroness of the Missions, so that millions of Catholic young people can be taught the truth about the origins of man and the universe and the foundations of their faith can be restored.

P.S. Dr. Thomas Seiler and I will be in Norway from August 30 to September 3 and I will be in the UK with Greg Clovis from September 4 through September 14. We have a number of openings in our schedule, so if you know anyone in any of those places who would like to organize a Kolbe seminar, please let me know as soon as possible.