In this newsletter, we will continue our reflections on God’s greatest miracle—repentance!—and on St. Adam as an exemplar of a truly repentant soul.

In modern times, no one has been a greater prophetic witness to the necessity of repentance than St. Padre Pio, the Capuchin stigmatist priest-monk of San Giovanni Rotondo.  It is estimated that St. Pio refused absolution to one out of three of those who went to him for confession—because God enlightened him to see that these souls were not truly repentant.   This refusal of absolution often angered the penitents, but again and again it served as the “shock” to their system that they needed to respond to the grace of God with a firm purpose of amendment, so that they were willing to die rather than fall back into any mortal sin or into the near occasion of sin.   The story of the atheist intellectual Paolo Nigro illustrates how St. Padre Pio elicited cooperation with the grace of God from hardened sinners so that they arrived at the point where they could receive the grace of true repentance.

Paolo Nigro received a degree in Humanities in 1936 and took a second degree in Philosophy in 1940. He considered himself an atheist and his Philosophy thesis was a denial of the existence of God. He later taught in high school, all the while maintaining his ideas. His wife how­ever was strong in her faith. Because she was an orphan, she had been brought up and educated in a convent run by Car­melite nuns and she had stayed there until she was twenty-two. Together they made their home in Taranto.

When Paolo was still very full of intellectual vigour and feel­ing quite fit, he was suddenly struck by an grave illness. He had a dry pleurisy and in the spring of 1950 it was bringing him close to death; the doctors in fact had eventually declared they could do nothing more for him.

One Saturday evening in April at 10pm two men knocked at the door of his house; they introduced themselves: Otello Risaliti was a warrant officer in the Navy and the other was a man named Carlo Lusardi. Since Paolo's wife Maria did not know them, she of course did not want to let them in the house, for she was alone with her two children and her seri­ously ill husband. At this time, he was gravely ill and had had a very high temperature of 105°F for two weeks. At times he was delirious, and seemed at death's door.  The two men insisted saying: "Padre Pio has sent us and we have to say the rosary for the man here who is seriously ill".

The poor woman had never even heard of Padre Pio and therefore she was unsure what to do. She told the men to wait at the door and went and had a word with her sick husband, who having heard that the men spoke of saying the rosary, he gave his permission, and so finally she let them in.

Here it must be said that a few years before, in 1946, Prof. Nigro had slightly changed his opinion as an atheist. He had surprised everyone when he had requested to meet the Archbishop of Taranto, Mons Bernardi, to whom Prof Nigro related a story of how he had had a kind of vision in which he saw Our Lady's profile. After this vision he started to go to Mass, even though he didn't go regularly. We can surmise that this was the reason he let two strangers, who wanted to pray the rosary for him to the Blessed Virgin, to come into his house. 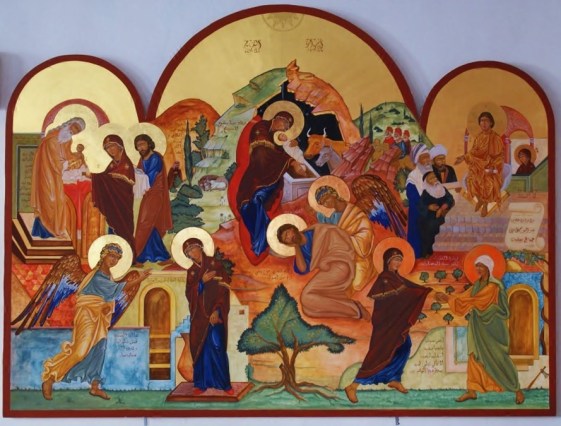 Santina, Paolo's daughter, who was a child at the time tells us what happened next:

"I can see it as if it were yesterday. The two men, Risaliti in his white uniform and Lusardi, both kneel­ing and together devoutly saying the rosary. However as they were praying, dad was restless and said to mum: "Maria, send that hooded friar at the foot of the bed away". Mum said nothing; she imagined that vision was due to his high temperature".

Before leaving after finishing the rosary, the Padre's spiritual sons discreetly begged Maria to accept some money: "It is sent by Padre Pio. You will need it next week to pay for your husband's journey from here to San Giovanni Rotondo. The Padre wishes to see him. And the remainder is for the medicines".

About this particular point Santina explains: "It was as if Padre Pio knew we had spent nearly all our money to buy penicillin which was very expensive at the time".

The following Monday, the sick man was much better. His temperature had gone down to normal and the doctors were amazed. His health had improved so much that on Thursday, three days later, at 9.00 in the morning, Risaliti and Lusardi came to collect him and take him by taxi to the Taranto train station, as he ardently desired to meet Padre Pio. In the evening they ar­rived at San Giovanni Rotondo and the three men together took lodgings in a little white house on the right, going up the road leading to the friary.

The next day, Friday, they took him to the sacristy where Padre Pio was confessing the men. At the end of the confessions, P. Pio came out from the curtain, which hid him from view of onlookers.

"My Dad" said Santina, “immediately recognized in him as the friar who the previous Saturday he had seen at the foot of the bed while the rosary was being said. My dad immediately went up to him and threw him­self on his knees, crying. The Padre helped him up holding his wrists and said in our dia­lect: "If you cry, I won't come to your house any more."

The next day dad confessed to the Saint, who put him back in God's grace and accepted him as a spiritual son. He immediately became a different person. He went to Mass every day and received Holy Communion.

The Padre continued to be near him in those first steps into a new life. He came [spiritually, through bilocation] to visit him at home. During his convales­cence dad sometimes said to me: "Santina, Padre Pio is putting his hand on your head".

Afterwards I had often seen him crying because of his past sins. He tried to make up for it by leading people to God and also to Padre Pio.”

The Repentance of St. Adam and St. Eve

In the Tradition of the Church the repentance of St. Adam and St. Eve was kept continually before the interior eyes of the faithful.  St. Aengus, an Irish saint who flourished in the last quarter of the eighth century is held in imperishable honour as the author of the Feliré, or Festology of the Saints. In his work “The Penance of Adam and Eve,” St.  Aengus has St. Adam address St. Eve in great sorrow after their expulsion from Paradise:

Adam was a week yet
after his expulsion out of Paradise,
weary, without fire, without dwelling,
without drink or food or clothing.

Because they were impoverished
they went into the midst of the field,
great was the mutual reproach perpetually
between Eve and Adam.

“O Eve of the just fair form,
sorrowful are we through thy impenitence;
through thy misdeeds, through thy transgression,
alas! we have been cast out of Paradise.

“Much did we relinquish of good
when we vexed our High Prince;
Paradise was ours under perfect command
with every reverence.

“Youth and joy, by us it has been heard,
health, playfulness, delight,
bordered lands, most perfect of form,
wondrous plants, harmonies.

“Noble satisfaction, singular wholesome peace,
a festival of holiness for souls,
. . . many the habitations,
frequent intercourse with angels.

“Lasting life, continually at God's right hand,
for ever in the brughs of Paradise,
in which, under fair aspect,
God's creatures were doing us reverence.

“All the living things under heaven
which my faithful dear God created,
under (our) control over every high place,
we it was who used to order them.

“Fire would not burn us,
water would not drown us,
nor sharp edge . . .
nor (was there) pestilence nor consuming disease.

“There was not among the elements of dear God,
one that would come, in heaven or earth,
against our will, to destroy us,
save only the wicked Lucifer.

“Even Lucifer
could not harm us,
while we were under law (in a) perfect course
according to mandate, according to command.

“Because we wronged dear God
who gave us everything,
on every height, all creatures together,
are (now) in opposition to us.

“It is not God who has been evil towards us,
O Eve, ruddy, gentle fair one;
it is we who have wronged the Prince,
though He provided us with lasting good.” 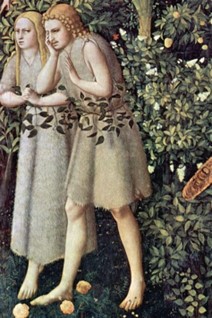 Eve spake, for she was in distress,[7]
in sorrow, after the fall;
“O Adam, marvellous over every wild,
why do you not kill me for my sins?

“It is I who transgressed the law,
it is I who committed the transgression,
it would then be right that thou should'st slay me,
O my Lord, O Adam!

“Provided that I fall (just the measure)
for my sins, for my transgression,
clearly the greater mercy
will thy God shew towards thee.”

“Greatly have we offended the King,”
said he, said Adam, without contempt,
“O Wife, I will not commit murder on thee,
though I be famished, though I be naked.

“I will not lift my hand
upon my own blood, my own flesh;
how great soever thy crime,
it is from my body thou art.

“It is not fitting for us in any way
to outrage Him again;
so that the true Prince, O wife,
may not cut us off and utterly destroy us.

Today we hear a lot from feminists who claim the right to “lift their hands” against their “own flesh” for no crime at all.  Perhaps it is time for us to make St. Adam and St. Eve special intercessors for the unborn, recognizing that in spite of Eve’s great guilt, St. Adam tells Eve that he would not “lift his hand upon his own blood, his own flesh; how great soever thy crime, it is from my body thou art.”  All women on earth today exist because “the mother of all the living” came forth from the body of a man—a man who would not “lift his hand upon his own blood, upon his own flesh, that came forth from his body.”  Let us invoke St. Adam and St. Eve to obtain for us and for all souls the grace of true repentance!

P.S.  We will be giving seminars and presentations throughout the Eastern United States in October, beginning in Florida at the beginning of the month and ending in North Carolina on October 28-29.   If you can organize a talk or a seminar in your area within that time-frame, in Florida, Alabama, Mississippi, Louisiana, Texas, Arkansas, Tennessee, or North Carolina, please let me know at howen@shentel.net as soon as possible.