As we prepare for the great feast of the Glorious Assumption, and mindful that our Blessed Mother exemplifies the virtue of obedience, I would like to use this newsletter to answer a charge of disobedience that is sometimes leveled against us. The accusation is sometimes made that we are being disobedient to the Magisterium because the Pope and the Bishops allow Catholics to entertain the evolutionary hypothesis while we argue against it. It seems that even some well-meaning Catholics believe that "obedience" to the Pope and the bishops means that everything that they allow to be discussed must be treated as being of equal validity, and that it is disrespectful if not downright disobedient to argue that some views or practices that are currently being allowed should be abandoned. This view has resulted in the marginalization of many Catholics who are falsely labeled as "radical traditionalists" or unfairly stigmatized as "rebels" when they are acting in filial love for the Pope and the Bishops by striving to defend the superiority of one "permissible" view or practice over another for the glory of God and the good of souls. An example may be helpful to illustrate the point I am trying to make. 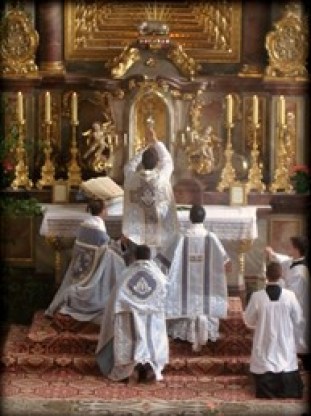 On the contrary, Cardinal Ratzinger was showing true filial love for the Pope and true fraternal love for his brother Bishops by arguing for the restoration of a practice that would help priests and lay faithful to experience the true meaning of the Divine Liturgy as a Holy Sacrifice, offered to God by the priest on behalf of the people. In other words, while recognizing that the offering of the Divine Liturgy facing the people had become the norm in communities of the Roman Rite, Cardinal Ratzinger felt obliged to demonstrate the superiority of the offering of the Holy Sacrifice ad orientem, in the hope that his demonstration would contribute to a restoration of the traditional practice.

It would have been silly for people to criticize Cardinal Ratzinger for being disrespectful to his brother Bishops of the Roman Rite, simply because he criticized a custom that most of them had adopted. The proper response of an advocate of the offering of the Holy Sacrifice "facing the people" would have been to answer the arguments set forth in The Spirit of the Liturgy and to show, if it were possible, that this orientation accorded better with the meaning of the Divine Liturgy and redounded to the greater glory of God and the good of souls. At least some of those who approached The Spirit of the Liturgy with that attitude came to realize the superior conformity of the offering ad orientem to the purpose of the Holy Mass and the Tradition of the Church and changed their minds.

If anything, the situation with regard to the traditional Catholic doctrine of creation is even more clear-cut.  On the one hand, all of the Fathers, Doctors, Popes and Councils in their authoritative teaching held that God created all of the different kinds of creatures by fiat in the beginning of time for man in a complete and harmonious creation marred only by man's sin. On the other hand, for several decades most of the bishops have embraced or tolerated the idea that God used evolution over billions of years to evolve the first human beings through a process that involved unimaginable amounts of death, deformity and disease, whereby the god of evolution produced huge numbers of different kinds of creatures only to destroy them so as to evolve something better, finally evolving the bodies of the first human beings and placing them in a world that that the god of evolution had deliberately filled with death, deformity and disease.  In this case, however--and unlike the situation with regard to the Sacred Liturgy--the Magisterium has never come close to teaching theistic evolution with the same degree of authority as the traditional doctrine of creation.  For example, Pope Pelagius I gave the King of the Franks a Profession of Faith which included an article to the effect that Adam and Eve had no parents but were "created, Adam from the dust of the earth and Eve from Adam's side."  In contrast, no papal statement favorable to theistic evolution has ever been made above the level of, say, a statement at a Wednesday audience. 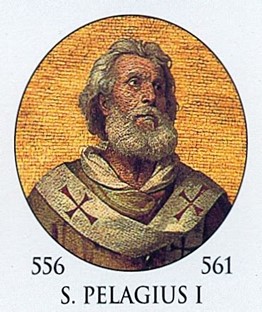 It is in the light of these considerations that one must interpret the permission granted by Humani generis to entertain the hypothesis of human evolution. Indeed, in a rarely-quoted passage from Humani generis, Pope Pius XII teaches that the answers to questions about origins are not to be found in speculation but in a deeper investigation of the Sacred Deposit (cf. HG, 21).  This is important because it means that human evolution can only be safely held if, ultimately, it can be reconciled with the authoritative teaching of the past. But hardly anyone since HG has made a serious attempt to reconcile all of the authoritative papal and conciliar teaching on creation of the past--as it was understood by those who formulated it--with theistic evolution.

In the meantime, evolutionary scientists have had 71 years to produce some solid evidence for their hypothesis and have utterly failed to do so.  Indeed, as St. Maximilian Kolbe observed in the 1930s, the more that natural scientists learn about nature, the more evolution is exposed as, in the words of Nobel laureate for biochemistry, Sir Ernst Chain, "a theory without evidence and against the facts."  At the same time, who can fail to see how the "fact" of evolution has been used to justify every kind of abomination in society and every kind of liturgical and theological deviation within the Catholic community?  Worst of all, who can fail to see how the teaching of theistic evolution in Catholic schools and universities has confused, eroded, and often destroyed the faith of millions of Catholic youth?

In light of these facts, we submit that Catholics have at least as serious an obligation to defend the traditional doctrine of creation as we have to defend the sacrificial character of the Holy Mass and the offering of the Holy Sacrifice ad orientem by virtue of its greater conformity to the Tradition of the Church and her authoritative doctrine on the Sacred Liturgy.  While recognizing that the recent Popes have granted Catholic “experts” permission to evaluate the evidence for and against the evolutionary hypothesis, any Catholic who has obeyed Humani Generis and who has 1) evaluated the evidence for and against the evolutionary hypothesis 2) recognized that the scientific evidence does not support it, and 3) noticed that theistic evolution makes God the author of defects in creation which are actually the result of sin--is obligated, for the honor of God and for the good of souls, to defend and promote the traditional doctrine of creation until such time as (per impossibile) the Pope and the Bishops teach theistic evolution with the same degree of authority as the traditional doctrine of creation has been taught by the Popes and Councils of the past.  (In reality, Vatican I on Faith and Reason and Lamentabili of St. Pius X truly make this an impossibility, since both condemned with the full weight of conciliar and papal authority the proposition that “the progress of the sciences” could require that the Christian doctrine of creation be altered.) 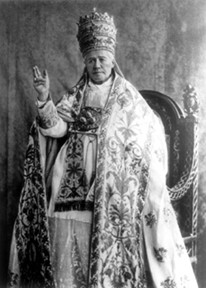 P.S.  If you believe in the value of our apostolate, please prayerfully consider making a donation to support our work.