One of the main objections to the traditional Catholic reading of Genesis 1-11 concerns the alleged impossibility of a global flood.  In response to this objection, a number of highly qualified scientists have developed Flood Models that can explain much of the evidence that we see in the Earth’s rocks and oceans today.  Two of the models that have demonstrated the greatest explanatory power are the Catastrophic Plate Tectonics (CPT) model of geophysicist Dr. John Baumgardner and the Hydroplate model of mechanical engineer Dr. Walt Brown. 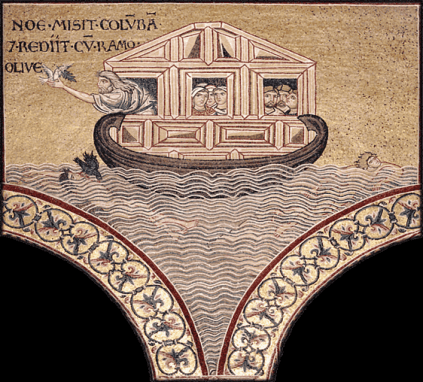 After studying the CPT and Hydroplate models for many years, I have concluded that ALL models will fail that do not take into account that the Flood was a SUPERNATURAL divine judgment on the world. St. Peter implies as much in his Second Epistle when he warns that the scoffers who try to explain the origins of man and the universe in terms of the same natural processes that are going on now will have to “ignore the fact” of the fiat creation of all things in the beginning and will also try to ignore the “fact” that God destroyed the first-created world with a global Flood (cf. 2 Peter 3).

One of the unique events that many geologists have associated with the Global Flood is a burst of accelerated radioactive decay that produced hundreds of millions of years or billions of years of decay by long half-life radioactive elements—such as uranium into lead—in a very short period of time, thus giving uniformitarian scientists the impression that the rocks containing these elements must have formed hundreds of millions or billions of years ago.  To those who, for many good reasons, propose a burst of accelerated radioactive decay, the skeptics protest that such an event would have generated so much heat that it would have incinerated the Ark and everyone on board!

This objection reveals the incoherence that characterizes the “scientific” objections raised against the traditional Catholic reading of Genesis by theistic evolutionists and progressive creationists.  On the one hand, these critics believe in the supernatural creation of the sacred Humanity of Christ in the womb of the Blessed Virgin Mary and in the supernatural resurrection of the same sacred Humanity on Easter Sunday.  On the other hand, when the origins of man and the universe or the global Flood are concerned, supernatural explanations are suddenly ruled out.  In reality, God has solved the “heat problem” supernaturally for His children repeatedly during the course of salvation history, from Noah’s Ark, to the Fiery Furnace in Babylon, to the many fiery miracles in the lives of the saints down to the present day.  One of the many fire-miracles in the lives of the saints occurred during the life of St. Dominic specifically to bear witness to the supernatural creation by God of all of the different kinds of corporeal creatures at the beginning of time. 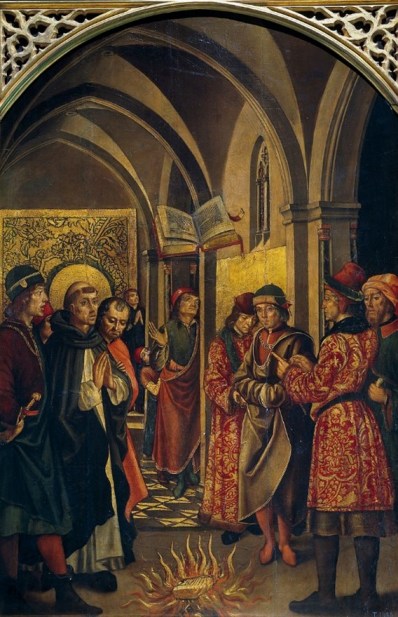 According to contemporary chroniclers, some of the Albigensian-Catharist heretics taught that Satan created the material elements while others held that God created them, but both groups believed that Satan “divided the elements” and formed the bodies of the various corporeal creatures—the plants, the animals and the human body.   On one occasion a group of heretics proposed a “trial by fire” whereby the Catholic party would present their best written defense of the traditional doctrine of the special creation of all things and the heretics would present their best written defense of their doctrine and the two books would be cast into the fire to let God judge between them.  According to St. Dominic’s biographer Blessed Jordan of Saxony, when St. Dominic’s writings were chosen to be cast into the fire at the same time as the heretical writings:

that of the heretics was immediately consumed to ashes; the other which had been written by the blessed man of God, Dominic, not only remained unhurt, but was borne upward by the flames in the presence of the whole assembly.  Again a second and a third time they threw it into the fire, and each time the same result clearly manifested which was the true faith, and the holiness of him who had written the book.

Are we to believe that God who preserved St Dominic’s book from the flames could not preserve the Ark and its contents and even the other living things outside the Ark—in the seas or on floating mats of debris—from the heat produced by the accelerated burst of radioactive decay that took place during the Flood?

More recently, I believe that Our Lady of Fatima answered all of the skeptics and showed us the solution to the "heat problem" on October 13, 1917, when during the Miracle of the Sun she instantly dried the water-saturated ground under the feet of 70,000 people, as well as their hair, skin, and clothes.  When I asked physicist Dr. Thomas Seiler to calculate the amount of heat that would be required to accomplish this feat, he easily demonstrated that it would have been more than enough to have incinerated the whole crowd!

Here are his estimates: 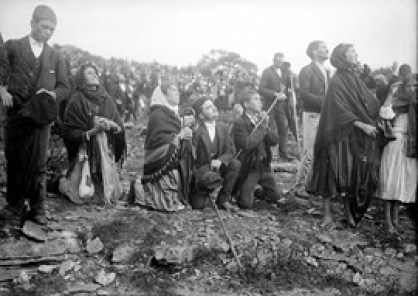 Water content in 1 m² on which each person is standing: 4 l

The entire heat power of the sun per m² arriving at the earth before entering the atmosphere is 1,4 kW/m². Taking into account all losses through the atmosphere and due to the angle of the earth's surface relativ to the sun one obtains 0,7 kW/m² for central Europe. Let us therefore generously estimate 1 kW/m² solar heat power arriving on the ground of Fatima.

If we say that it took 10 s to dry clothes and soil at each m² then the sun would deliver 10 kWs in such a time on each m². However, we need 1470 kWs to dry one m². That means we would need 147 times more heat power than the sun usually radiates. If all happened in only 1 s then the sun would have had to radiate 1470 times stronger than usual.

Since many parts of the clothes would not be directly exposed to the sun, it would take very much more heat power from the sun to bring the necessary heat to somebody's back where the sun doesn't reach directly.

This is therefore a clear case of non-applicability of natural laws to explain a process that definitely happened on earth. The event at Fatima transcends the usual Order of Providence.

So much for "heat problems" when God acts supernaturally!

Tomorrow I will begin an intensive Kolbe seminar tour with a presentation in Omaha, Nebraska, followed by at least one other presentation in the Omaha area, one or more seminars in the Kansas City area, three presentations in the Milwaukee area, three in the Detroit area, two or three in Indiana, one in Kentucky, and three or four more in Ohio, culminating with a presentation at Franciscan University of Steubenville on “Creation, Evolution and the Crisis of Faith,” approved by the administration but requested and organized by one of the students in the Juventutem chapter on campus.  Please see the Events page on the Kolbe website for details, pray for God’s blessing upon the seminars, and spread the word to friends and family who live in any of those areas so that we can reach as many people as possible.