The ultimate purpose of the Kolbe Center is the salvation and sanctification of souls.  All the arguments that we present from theology, philosophy and natural science against the evolutionary hypothesis have this purpose—because faith in molecules-to-man evolution erodes or destroys faith in God and prevents unbelievers from receiving the gift of Faith in the Gospel of Jesus Christ.

Adolf Eichmann was a Nazi official charged with implementing the round-up and internment of millions of Jews in concentration camps.  At the end of his life, Eichmann was kidnapped from his adopted home in South America and taken to Israel to stand trial for crimes against humanity.  After being sentenced to death by an Israeli court, Eichmann was visited several times by an Evangelical pastor named William Hull who received permission from the Israeli authorities to meet with Eichmann and who sought to bring the condemned man to repentance and faith in Jesus Christ.  The Struggle for a Soul describes Hull’s meetings with Adolf Eichmann and highlights the terrible spiritual consequences of failing to attack the stronghold of faith in evolution head on.

Although Eichmann had been raised a Christian, as a young man he embraced the evolutionary hypothesis then in favor with most of the intellectual elite in Germany.  At several critical points in his discussions with Pastor Hull, Eichmann made clear that he firmly believed in an evolutionary god who had evolved the first human beings through a natural process involving hundreds of millions of years of death, deformity, disease, and violent struggle for survival.  Tragically, Pastor Hull sought to ignore Eichmann’s faith in evolution and to focus his attention on Jesus Christ, His Passion, death and Resurrection, and on the absolute necessity of faith in Him for salvation—but Eichmann continually challenged the reliability of the Gospel and the exclusive claims of Jesus on the grounds of the alleged scientific evidence for evolution.  On one occasion, Eichmann asked:

… why did God wait … millions of years, from the beginning of creation, and only provide this salvation through His Son two thousand years ago?

On another occasion Eichmann quoted the philosopher Spinoza to the effect that “in this world there exists nothing that is evil in itself.” And Eichmann added his own comment:

Man, a product of development willed by the Creator, is still in the early stages of becoming, only on the way toward perfection . . . Our former animal instincts will disappear by our own efforts within ourselves. But human development toward perfection must be measured not in generations but in aeons. 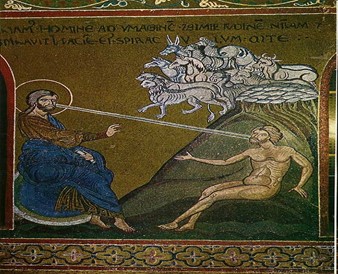 Hull continually refused to challenge Eichmann’s faith in long ages of evolution and thus failed to address the condemned man’s persistent rationalization for his behavior.  According to Eichmann, god had used hundreds of millions of years of violent struggle for existence to evolve the “more fit” at the expense of the inferior races.  Thus, he could not bring himself to repent from the heart for his participation in a eugenics program which had merely sought to accomplish efficiently and scientifically what god had accomplished through natural selection over millions of years.  Had Pastor Hull exposed the fatal flaws in the evolutionary hypothesis and demonstrated that it was, in Sir Ernst Chain’s words, “an hypothesis without evidence and against the facts,” he might well have been able to break down the apparent contradiction between the living God of the New Testament and the evolutionary god of death and destruction.

However, like so many Christians today, Hull mistakenly believed that the Gospel could be reconciled with evolution and long ages and, so, he did not see the necessity of attacking this stronghold.  As a result, Eichmann went to his death refusing to believe in a Gospel which in his view had been rendered obsolete and irrelevant by evolutionary “science.”  As Eichmann expressed himself in a letter to Hull:

I am not prepared to accept anything that disagrees with my naturalistic conceptions.

Before he dropped to his death by hanging, Eichmann affirmed his belief in god.  But his god was not the living God of the Bible and Catholic Tradition.  It was the evolutionary, Hegelian god of aeons of death and destruction. 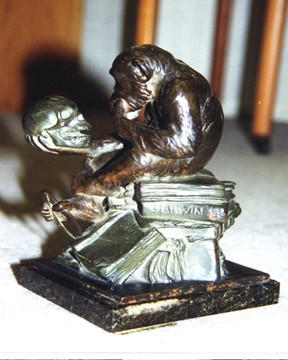 If only St. Maximilian Kolbe had been able to counsel Eichmann and to disabuse him of his misguided faith in evolution before he died!  We can only pray that through the intercession of the Immaculata, of St. Maximilian, and of all the saints, all souls invincibly ignorant of the whole truth of the Gospel might receive the grace of final repentance and salvation before they enter eternity.

P.S.  I will be giving a talk at the Franciscan University of Steubenville on Wednesday, September 29, at 7 p.m. on "Creation, Evolution and the Crisis of Faith," sponsored by the Juventutem chapter at the university. Please pray that the talk will be well received and that it will help to begin to restore the teaching of the traditional doctrine of creation on the Steubenville campus.