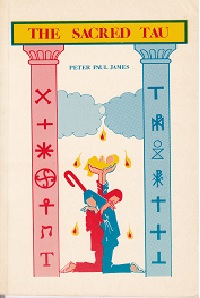 This book was written by a priest, Fr. Peter Paul James, OFM (d. 2011). Early in his priesthood, he spent several years with American Indians in the Southwest U.S. He completed a M.A. in Philosophy at Xavier University in Cincinnati, Ohio. He also spent 20 years teaching philosophy and comparative religion at Our Lady of the Angels Seminary, Quezon City, Philippines.

Having heard various creation myths of the American Indians and the Philippine indigenous people, and knowing other pagan myths, in this book he attempts to reconcile them with each other and with the book of Genesis. The story that he uses for a basis of all creation myths concerns the planet Saturn, which he says in ages past hovered over a fixed point on Earth.

Apparently Saturn suffered a number of cataclysms, one of which filled Earth’s dry basins with water, and another of which caused a flood on the Earth. It finally moved into its present position beyond Jupiter in another cataclysm. He draws parallels between the creation and flood stories in Genesis with these events, although the creation and early history of Saturn predate Genesis in the estimation of Fr. James.

He offers various quotes throughout the book such as one by Fr. Teilhard de Chardin, SJ:

Not only must history, in order to accept Adam and Eve, be strangled in a quite artificial way, on the level of the appearance of man, but – in a more immediately vast area, that of belief – the expansion of our religion is constantly stifled by the present formulation of the doctrine of original sin. It clips the wings of our expectations and inexorably leads us back into the shadows of reparation and expiation. (Christianity and Evolution, 1969)

He also notes that the doctrine of original sin is a major obstacle to missionary work in China, since in Buddhism, self-salvation is possible. So I guess Fr. James agrees with Fr. Chardin in thinking that we should reinterpret the dogmas of original sin and salvation so that Catholicism will be more palatable to the pagans! Apparently they have forgotten that it is only in the name of Jesus that are we saved. (cf. Acts 4:12) Is it any wonder that most Catholic missionary work has essentially ceased?

Another uncritically mentioned idea is that the gods were either great kings or stars who became deified, which gave us the notion of religion. If that is the case then pretty much everything is up for grabs. One paragraph in the book shows that Fr. James spent a bit too much time with comparative religion:

New developments in the study of comparative symbolism and mythology not only offer a basis upon which to reformulate some of our fundamentalistic interpretations of the scriptures, but they point forward to the time foreseen by Bonaventure when a simple understanding of the sacred texts will come forth that will be non-discursive and non-scholastic in character.

The reference in the book for this comment on Bonaventure is Ratzinger’s The Theology of History in St. Bonaventure (1971). In that book, the now Pope Benedict XVI explains how Bonaventure considered the period of St. Francis to be the start of a new time: "this should be a time of universal reconciliation, of reconciliation between the East and the West, between Christians and Jews, a time without laws -- in the Pauline sense -- a time of true brotherhood in the world.”

It is unfortunate that many churchmen see the reconciliation of mankind not as the acceptance of revealed truth, but as an agreement on the least common denominator (the religion of nice). So much for the notion of inerrancy of Scripture and the permanence of dogma.

It is said that if you stop believing the truth, you will not believe in nothing, but that you will believe anything. Some people would rather believe in pagan myths than in divinely revealed truth. It does not seem to occur to Fr. James and others that the Bible is the inerrant Word of God and that pagan myths are corruptions of history.

In several of the letters of St. Paul (1&2 Timothy and Titus) he warns us against fables. St. Peter said: “For we have not by following artificial fables, made known to you the power, and presence of our Lord Jesus Christ; but we were eyewitnesses of his greatness.” (2 Peter 1:16)

This book is essentially a record of why the Catholic Church, especially the religious orders, is in such a crisis today. Priests like Fr. James were allowed to teach these ideas freely, destroying the faith of countless souls. We definitely need to get back to reality and the traditional teachings of the Church before society completely disintegrates.