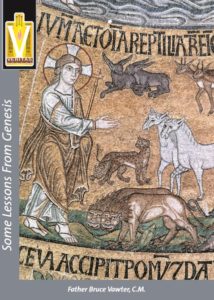 The Knights of Columbus puts out this booklet, which was written in about 1969 by Fr. Bruce Vawter C.M. (d. 1986), a professor of Religious Studies at De Paul University in Chicago.  Wikipedia says that he received his doctorate in sacred Scripture from the Pontifical Biblical Institute in Rome, and that he was a witness at the McLean v. Arkansas trial of 1981 (“Scopes 2”) where a judge decided that creationism could not be taught in public schools.

You would expect that a modern, educated Catholic priest would be a theistic evolutionist, and Fr. Vawter is no exception.  You can imagine what “lessons” he is able to glean from Genesis.

Right off the bat on page 6, he makes the curious statement that: “Paganism is not, of course, always an evil thing …”  If you ignore the fact that it violates the First Commandment, I guess you could say that.

On the very next page he rhetorically asks: “Can we really look on the first chapters of Genesis as history?”  The answer given is: “They are not history in the modern sense of the word, that is true.”  Of course, if you accept evolution theory as literally true, then Genesis cannot be literally true.  You have to make a choice.

Did Moses write the first five books of the Bible?  Fr. Vawter says this on page 8: “The inspired Israelite authors who produced the written Pentateuch …”  Never mind that Jesus said: “For if you did believe Moses, you would perhaps believe me also; for he wrote of me (John 5:46).”  He is obviously the product of the modern, Catholic education system.  On the same page he says: “In the first chapter of Genesis, for example, we have a poetical representation of the formation of the visible world and its inhabitants in six days.”  If Genesis is not literally true, then it must be a poem/parable/legend/myth.

Going on to page 9, he writes: “The ancient Israelite authors did not know, as we now know, that the process during which the universe was in the making extended over literally millions of years.”  I would rather say that Moses did, in fact, know that the world was only thousands of years old – a fact believed by all the Catholic Church Fathers and Doctors.

At least Fr. Vawler admits that: “Because it [Scripture] is God’s word, we know that it cannot teach us error.”  Of course, if you turn Genesis into a poem, then what it is actually teaching us is up for debate.

If you tell someone about a trip that you took, you might tell it in chronological order, or you might mention the most interesting things first, without regard to chronology.  That is how Moses related the creation of the world in Genesis 1&2.

The rest of the book is basically a series of arguments about this or that passage of Genesis which cannot be taken literally, but that it is only teaching us lessons about human nature.  For example:

From page 15-16: “The Bible is not teaching us that the first man was actually shaped out of clay and that the first woman was formed from one man’s ribs … No, the Bible has nothing to say about the physical process by which man was created, or about the time it may have taken, just as it says nothing about the vast ages during which the universe was in formation.”  [Then why bother reading it?]

From page 18: “To say that the Biblical authors presupposed that mankind began from a single man and woman, however, is not the same thing as to say that the Bible teaches this.”  [You have to be able to perform mental gymnastics like this in order to be a theistic evolutionist Scripture scholar.]

From page 32: “But is the inspired author teaching us that man was created immortal?  Here we would seem to have something said that really contradicts our experience of man.”  [never mind Romans 5:12: “Wherefore as by one man sin entered into this world, and by sin death…”] Also: “In the first place, the “geography” of the passage [Genesis 2:10-14 – on the four rivers] is impossible even by the loose standards of antiquity...”

Pope Leo XIII taught that the Bible is free from all error (Providentissimus Deus, #21).  He also said that Eve was taken from the side of Adam on the sixth day of creation (Arcanum, #5).  This was after Darwin published On the Origin of Species in 1859 and what Catholics always, everywhere believed.  Unfortunately, Darwin has had more impact on Catholic Bible scholarship than Leo XIII.  The Church and society have suffered greatly as a result.  We have now returned to the old paganism.

This booklet could have been written by any number of theistic evolutionist Scripture scholars, because they all deny the literal truth of Genesis.  (In fact, are we sure that Fr. Vawter wrote this book himself, or was it written by a group of scholars under his direction?)  They clearly do not have the faith of the Apostles.  This kind of thinking has led to rampant apostacy in our day, even at the highest levels of the Catholic Church.  The Knights of Columbus would do well to stop promoting this book.

(All emphasis mine in the book quotes.)
Eric Bermingham
October, 2019