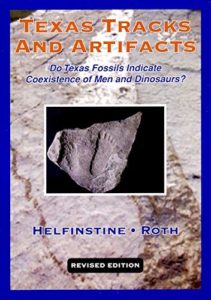 This book is an examination of the controversial fossil tracks found along the Paluxy River near Glen Rose, Texas. The controversy surrounds the question of whether certain tracks are human or whether they are dinosaur or perhaps carved into the rock. Helfinstine and Roth show that several human tracks have been found among dinosaur tracks, and even some human tracks within dinosaur tracks. They also give supporting evidence for men and dinosaurs living contemporaneously.

Robert F. Helfinstine is a retired professional engineer in electrical engineering who worked at Honeywell for 40 years in design and development of avionics systems. He is president emeritus of the Twin Cities Creation Science Association (TCCSA), for which he served terms as president, secretary and treasurer over a span of 34 years of membership.

Jerry D. Roth is a retired electrical technician who worked at Honeywell for 31 years as an investigative analyst of vendor component defects. He was a member of TCCSA for 22 years and served six years as president. He was a member of the East Tennessee Creation Science Association, but is recently deceased.

The first edition of this book began as a summary report on investigation of fossil evidence concerning the coexistence of men and dinosaurs from the years 1986 to 1993. Much of the activity centered on tracks found in the Paluxy River valley. The revised edition has information on tracks discovered after 1994 and a new section with supporting evidence for the coexistence of men and dinosaurs.

There is no argument that there are fossil dinosaur footprints preserved in the rock; the question concerns the human tracks. Although these tracks appear to be human, it has been suggested that they are eroded dinosaur tracks, or rock carvings, or even tracks of extraterrestrials. Clearly, if there are human tracks among the dinosaur tracks, the theory of Evolution with its long ages will have to be reconsidered.

The series of footprints which receives the most attention is the Taylor trail, discovered in the 1970's by Stan Taylor. When first discovered, it was a series of tracks which had characteristics of both human and dinosaur footprints. Arguments against the tracks being human were that they could be eroded dinosaurs tracks or merely carved in the stone. Core samples taken of the underlying rock show that they were not carved. There was still a question as to whether they were human.

In the early 1980's, another analysis was made of the Taylor trail by Glen Kuban. He noticed some coloration around the tracks which made them appear to be dinosaur tracks. Various articles on the tracks appeared at that time, some of which supported the existence of human tracks and some of which denied it.

In the mid 1980's Helfinstine and Roth joined a task force to further study the Taylor trail. They obtained all of the information available on the tracks and visited the site at Paluxy. They made detailed studies of the tracks including: the contours, the aspect ratios (length to width), the stride, the coloration, the depth, the toe impressions, and the raised areas on the sides of the tracks (owing to the pushing up of the mud when the tracks were originally formed).

Other dinosaur and apparently human tracks in the Paluxy River area were also examined. Additionally, fossil turtle bones, the skull of a small mammal, and a tree root extending into more than one rock layer were found nearby.

The conclusion of their analysis was that the Taylor trail contains tracks which are virtually identical to modern footprints and other fossil human footprints found around the world. The other findings in the area indicate that the rock layers were formed rapidly, and that the human and dinosaur tracks were made at about the same time.

The examination also indicated that the human tracks run alongside or even within the dinosaur tracks. It appears as though a man was running in mud that had previously been walked through by a dinosaur. Could it be that they were both attempting to escape from something like another tidal surge, or were they looking for something like food?

The book includes a detailed analysis of teeth that were found in the same area as the human footprints. Although the shape of the teeth appears to be human, an analysis of the enamel was inconclusive. A fossilized, apparently human finger was also found in the area and a cross-section of the finger indicated the location of the bone and tendons.

Several other human tracks with dinosaur tracks in the same rock strata have been found in recent years. Even cat, goat, and horse tracks have been found near dinosaur tracks in other parts of the world. Two human artifacts mentioned in the book are a hammer encased in rock with a partially coalified handle, and a metal pot found in a lump of coal. All of this suggests that dinosaurs and men were contemporaneous.

Supporting evidence added to the revised edition in a separate chapter includes: Petroglyphs and pictographs of dinosaurs, effigy mounds in the shape of dinosaurs, pottery painted with dinosaur figures, ceramic dinosaur figures, and burial stones with carvings of dinosaurs and men (Ica Stones). Several modern dinosaur sightings are discussed. An appendix with tables of radiocarbon dates of dinosaur bones indicating tens of thousands of years, obtained by Hugh Miller, is included.

This book is a valuable support to claims for a young Earth, a Biblical special creation and a global flood. The fossil track analysis, together with the other archaeological evidence for men and dinosaurs living together, forms a powerful argument against evolution and long ages. Perhaps this and other evidence, such as the discovery of soft tissue in large dinosaur bones, will be enough to convince many people that Genesis is true history and not myth.