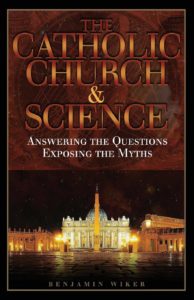 There is a lot of confusion about how the Catholic Church relates to the world of science and Benjamin Wiker has taken this opportunity to clear some of it up.  He discusses seven controversial issues which are as follows:

1. The Catholic Church is at War with Science
2. The Middle Ages were a Time of Scientific Darkness
3. The Anti-science Catholic Church Persecuted Copernicus and Galileo
4. The Church Accepts Darwinism or The Church Rejects Evolution
5. The Big Bang is a Scientific Alternative to Belief in a Creator God
6. The Origin of Life was One Big Happy Accident
7. The Vastness of the Universe Means Extraterrestrial Life Must Exist

He assures us that 1.) The Church has nothing against science and has historically supported it, 2.) The Middle Ages were not a time of ignorance about all things scientific, 3.) Copernicus and Galileo did not receive particularly harsh treatment, all things considered, 4.) The Church does not reject evolution as science, only the atheistic conclusions, 5.) If the Big Bang was the origin of the Universe, God initiated it, 6.) Life is not accidental and must have been designed, and 7.) You are not going to meet ET.

Dr. Wiker does shed some light on these issues.  His main point is that Faith and Reason are not at odds since the one God created everything.  Unfortunately he has accepted several key, unproven assumptions which damage the credibility of the Church and the Bible.

On page 77:
We know that the Earth is about four-and-a half billion years old...  We know that life remained on a relatively simple level until about 550 million year ago, from which time forward the fossil record reveals a developing diversification of creatures...

On page 93:
Our periodic table of elements, with its array of over 100 chemical elements, is the result of many billions of years of stellar evolution...

On page 103:
We realize that the Earth is not the physical center of the universe...

Dr. Wiker quotes the Catechism of the Catholic Church and Christoph Cardinal Schonborn several times to support some of his views (the Cardinal was the editor of the Catechism, incidentally).  According to the Cardinal, "The possibility that the Creator also makes use of the instrument of evolution is admissible for the Catholic faith." and "It is nonsense to maintain that the world is only six thousand years old."  Wiker goes so far to say that when the Catechism states that the universe was created "in a state of journeying," that it must mean evolution (page 61).  I guess they have never heard of the dogmatic declarations of Lateran IV and Vatican I which teach that God made everything at once from nothing.

Dr. Wiker was interviewed on a Catholic Answers radio program on July 28, 2010 entitled "Can Catholics Naturally Select Darwinism."  In the program, he was asked if a Catholic could hold to a young Earth and a six-day creation.  His response was NO.

It is nice of people like Benjamin Wiker to attempt to defend the Church against its detractors.  He does have a few good points in this book.  However, he really needs to understand the dogmatic teachings of the Church and the erroneous scientistic assumptions of modern science before he tries to reconcile them.