The Edge of Evolution – The Search for the Limits of Darwinism
Michael J. Behe
Free Press, 2007
321 pages 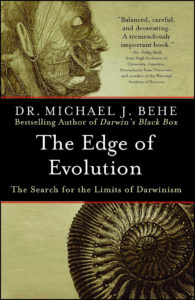 Michael Behe’s first book Darwin’s Black Box, published in 1996, saw the beginnings of the Intelligent Design movement.  After more than ten years of additional research, he decided to write a second book which solidifies the findings of his first – that the universe in general and living organisms in particular show unmistakable signs of design.  This book seeks to define the boundary between what can be achieved by undirected mutation and natural selection – Darwinian evolution – and what must necessarily have involved design by some intelligence.

Evolution has been allegorized by some as a sort of arms race where each side improves itself to counter the efforts of the other side.  What Behe shows is that the evolution which can actually be examined shows something more like trench warfare, with each side seeking the easiest possible method to stop the advance of the enemy; even if it means weakening itself.

The one case discussed throughout the book is malaria and the associated human reaction.  It provides an excellent example of evolution because malaria has been around for a very long time, it produces a huge number of organisms, and a number of drugs have been developed to counter its effect in humans.

Darwin admitted that his theory required that evolutionary changes in an organism must necessarily be small.  It is simply unreasonable to expect that an organism could spontaneously make a drastic, beneficial change in one step.  Behe shows that not only must the steps be small, they must have some advantage for the organism or the change will not be propagated.  Malarial drug resistance provides a good example of this.

Early anti-malaria drugs were effective for only a short time.  After several years, some form of malaria developed a resistance to them.  This form then became the dominant type.  Another drug, chloroquine, was effective for a longer period of time but malaria still manage to develop a resistance to it eventually.  Malaria has never been able to overcome sickle cell trait, however.  Persons with sickle cell trait are immune to malaria.  Unfortunately, they have other problems.

Behe describes the mechanism of malarial drug resistance in great detail.  One reason that it is such a good case study of the limits of evolution is that there have been so many malarial organisms produced – more than most other organisms combined!  One infected person may carry a trillion parasitic cells and about one billion people get infected every year.

It turns out that the early anti-malaria drugs were able to be defeated with just one small change to the malaria organism.  Resistance to the more effective drug chloroquine required two changes.  Apparently, resistance to sickle cell trait would require more than two simultaneous changes, and has never happened.  Assuming that changes in the cell happen similarly in all organisms, and calculating the odds based on the number of organisms, Behe estimates that no changes to the human genome of the complexity of chloroquine resistance in malaria have ever happened.  This puts severe limits on human evolution.

Taking it one step further, Behe estimates that no change which requires double the complexity of chloroquine resistance has ever happened at any time in any organism.  That is his upper limit on evolution.  Anything beyond that requires intelligent design.

This places the edge of evolution somewhere between classes and species of organisms.  Species are definitely explainable by evolution, classes are not.  Mammals, for example are a class.  A wolf is a species.  So evolution might get you a wolf from a dog-type creature, but it will not get you a mammal from an amphibian.

Behe begins to wax philosophical in the later chapters of his book.  He shows that not only does cellular construction display unmistakable marks of design, but many other natural features do also.  This includes the laws of nature, physical constants, the properties of elements, the location of earth in the solar system and in the galaxy, and the origin of life.  All of the natural sciences point to design in the universe.

Those accepting the biblical six-day creation will appreciate the fact the modern science supports the idea that living things were created according to their kinds.  However, Behe does not give them much other support.  He assumes longs ages, even though he shows that millions of years of evolution still do not change his conclusions.  He accepts common descent, even though another equally plausible idea is common design.  He accepts the Cambrian explosion, even though he would call it a finely tuned accident.  He even admits that proof of a designer is not necessarily proof of God (he apparently has not read Aquinas).

Overall, The Edge of Evolution is an excellent study of the limits of Darwinian evolution.  Behe’s description of the manifold examples of design in nature is also encouraging for believers.  This book could be a good starting point for a discussion of the limits of natural science.