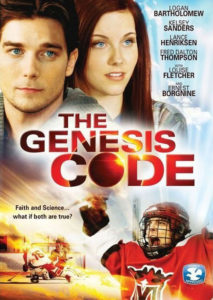 The Genesis Code is yet another attempt to reconcile the creation narrative in Genesis with the latest scientific theories.  Most of these efforts are well-meaning in their intent, but ultimately it is the Bible that ends up being reinterpreted.

The supposed revolutionary discovery in this movie is that today's scientific theories with their billions of years are in perfect agreement with the six days of Genesis, if only you understand that the six days are from God's perspective and the billions of years are from man's perspective.  A comment by the pastor in the movie suggests that it took this long for man to evolve to the point at which this could finally be understood – how ironic.

Overall the movie is well done, with romance, tragedy and suspense.  Unfortunately, the rather long sequence where the reconciliation of Genesis and science is explained is hard to follow unless you are already familiar with some modern scientific theories.  Basically, light is accepted as the ultimate measure of time, and it is explained how it can be affected by gravity, expansion of space, and velocity of the observer.  The "twins paradox" is used to show how the same event could be experienced by two observers in different lengths of time.

The "twins paradox" is the result of some aspects of the theory of relativity.  It says that a twin taking a trip near light speed would come back from the trip younger than the twin who had remained on earth, if we take the earth to be the frame of reference.  However, since everything is relative in the theory of relativity, if we take the traveling twin as the frame of reference, the twin on earth should be the younger one.  This exposes a serious problem for the theory, since one twin cannot be both younger and older after the same event.

The other major problem with reconciling modern theories with Genesis is the sequence of events.  In Genesis, the earth is present on day one and the sun, moon, and stars are not spoken into existence until day four.  In all modern scientific theories, the Big Bang occurs first, then the formation of the stars, and only afterwards are the planets formed.

Another out of sequence event is death.  The Bible states that death was a result of Original Sin, which affected the entire created order.  The millions/billions years of evolution involves death on a vast scale before man supposedly evolved.  There is no reasonable way to reconcile the sequence of events recorded in the Bible with any theory of evolution.

The truth of the Bible and the truth of science should not disagree, since they concern the one reality.  However, only the Bible has the guarantee of being true; natural science does not.  Furthermore, natural science can say nothing about the original creation since it was a supernatural event.  It can only apply to nature after the creation.

Many attempts have been made to reconcile Genesis with modern scientific theories.  Unfortunately, it is always Genesis that gets reinterpreted.  Natural scientists should accept that creation is an event which is beyond the natural order.  They should also understand that the Bible does not error when it speaks of thousands of years and not millions or billions.  When scientists finally accept the truth of the Bible where it concerns creation and time, then reason and faith will be reconciled.