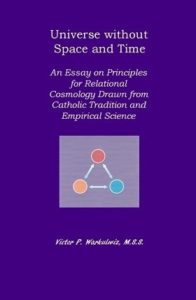 Rev. Warkulwiz, Theological Reviewer for the Kolbe Center for the Study of Creation, has written this book as a sequel to his previous work, The Doctrines of Genesis 1-11: A Compendium and Defense of Traditional Catholic Theology on Origins.  Having a Ph.D. in Physics makes him well-qualified to expound on this subject.

The book is relatively short given the subject matter, and only attempts to outline a concept of the universe that is more in keeping with Catholic tradition and experimental science.  This concept demonstrates that space and time are dependent on matter, and not absolute in themselves.  It further shows that the earth is the logical center of rest in the universe.

Before God created the material universe, there was no space or time, there was absolutely nothing but God alone.  Space can be thought of as a place where something could be, but right now is not there.  Time can only be measured with a regularly repeating phenomenon.  So space and time are dependent on material realities.

The heavy emphasis on mathematical physics and thought experiments has led modern scientists to think of equations with time and space parameters as independently existing realities.  This, however, has led to physical impossibilities like black holes, and the lack of any fundamental standards of reference.

Rev. Warkulwiz has devised a relational model of the universe which attempts to harmonize what we can know from revelation, traditional philosophy, and experimental science.  Hopefully, this will help to get the heads of modern scientists out of the clouds and back to reality.