I will never forget hearing a prominent Catholic theistic evolutionist express his conviction that the discovery of how life came from non-life through a material process would be one of the greatest scientific discoveries of the twenty-first century.  In reality, sound theology, sound philosophy and sound natural science confirm that life can only come from life and that only God can create life from non-life.  Indeed, it is remarkable to contemplate the fact that life comes from non-life every day, on all the Catholic altars of the world, wherever the Holy Sacrifice of the Mass is celebrated; and that this miracle is effected by the words of Christ, “Hoc est enim corpus meum,” or “This is My Body,” when uttered by a Catholic priest in persona Christi. 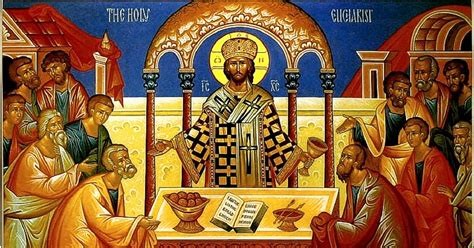 Down through the centuries, many Eucharistic Miracles have testified to this Truth—including one that took place when Pope Francis was Archbishop of Buenos Aires in 1996.  According to one trustworthy account:

Pope Francis, when he was Archbishop of Buenos Aires, ordered an investigation into a Eucharistic miracle that had taken place in a parish church in 1996 and he later approved veneration of the host in a chapel in the church. The facts of what took place are narrated by Ron Tesoriero in his book Reason to Believe, published in 2007.

On 18 August 1996 a priest in Buenos Aires was shown a host that had been left in a candle holder in the church. Because it was very dirty, rather than consume it he placed it in a bowl of water and put it in the tabernacle. Eight days later on 26 August he went to do his prayer in the Blessed Sacrament Chapel of the church, using a letter Pope John Paul II had written to the Bishop of Liège, Belgium, on the occasion of the 750th anniversary of the first celebration of the feast of Corpus Christi in that diocese (cf. J. Flader, Question Time 2, Connor Court 2012, q. 271). On opening the tabernacle he saw that the host had turned red and a blood-like substance was coming out of it. This increased over the following weeks.

He informed the then Auxiliary Bishop Jorge Bergoglio, now Pope Francis, who asked a professional photographer to take photos of the host, first on 26 August and then again on 6 September. Later, as Archbishop of Buenos Aires, he asked a Bolivian-born professor, Dr Ricardo Castañon, to conduct an investigation into what had happened. In October 1999 Ron Tesoriero went with representatives of the Archbishop to witness Dr Castañon removing a small piece of the host and some of the liquid and transferring them to a test tube, which was then sealed and labeled for forensic analysis.

In April 2004 Ron and Mike Willesee, both Australians, went to New York with the sample to have it examined by Dr Frederick Zugibe, a heart specialist and forensic pathologist. Without knowing the origin of the sample, Dr Zugibe looked into his microscope and described what he saw. He said that he was looking at human tissue, from the heart and specifically from the left ventricle, which pumps the blood. Moreover, the heart was inflamed and there had been recent injury to it, as in cases where someone has been beaten severely around the chest.

Even more remarkably, he could see white blood cells, which indicate injury and inflammation. There were many of them and they were all intact. He said these cells can only exist if they are fed by a living body, and that the person from whom the sample was taken was alive at the moment the tissue was collected. When Mike asked him how long the white blood cells would remain vital if they were in human tissue that had been placed in water he answered: “Oh, they would dissolve within minutes and no longer exist.” All this was caught on film.

Mike then asked him, “What would you say if I were to tell you that the source of this sample had been placed in ordinary tap water for a month, then stored for three years in distilled water before a piece was taken and fixed for examination?” The answer was “Absolutely unbelievable. No explanation can be given by science.”

“And what would you say if I told you that the source of this specimen was a piece of wheaten bread, a communion host?” After some hesitation as he took in this extraordinary revelation about what he had just examined, Dr Zugibe answered, “How or why a communion host could change its character and become living human flesh and blood is outside the ability of science to answer.”

Indeed, it is. But occasionally God allows miracles to take place to strengthen our faith. One such miracle took place in Bolsena, Italy, in 1263, when a host that had just been consecrated in Mass by a priest who doubted the Real Presence began to ooze blood when the priest held it up for the veneration of the faithful. Following this miracle, Pope Urban IV instituted the feast of Corpus Christi a year later, in 1264 (cf. J. Flader, Question Time 1, q. 150). Pope Urban was originally from Liège, where the bishop had instituted a diocesan feast of Corpus Christi in 1246.

It is significant that on the day the host in Buenos Aires was discovered to have turned red, the priest was doing his prayer with the Pope’s letter commemorating the institution of the diocesan feast of Corpus Christi 750 years before. 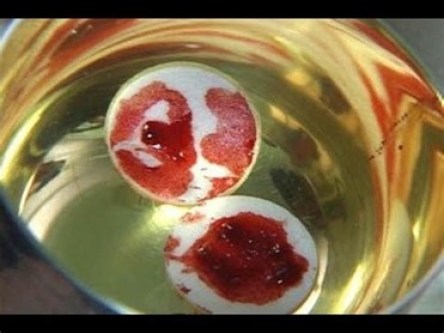 The Eucharistic Miracle of Buenos Aires confirmed that lifeless bread had become the living Flesh of the Redeemer of the world in the hands of one of His priests at the pronouncement of His words, “This is My Body.”  In this way the miracle confirmed that Our Lord Jesus Christ is the Eternal Word through Whom all things were made, and not just a great prophet or social reformer.  The identification of Our Lord Jesus Christ as Creator goes back to the very beginning of the Church and finds expression in the iconographic tradition and in the lives of the saints.

The Martyr St Eustace (born Placidus) was a Roman general under Emperor Trajan.  In The Martyrs of the Coliseum, we read that his conversion was inspired by words from Our Lord Jesus Christ confirming His identity as the Creator and Redeemer of the world:

Placidus was hunting, when he saw a vision between the deer's antlers and heard these words, "I am Jesus Christ, who created heaven and earth out of nothing, who threw all matter into shape, and made the light spring from the chaos of darkness.  I am He who created the moon, the stars, and caused the day and the night; who created man from the slime of the earth, and for his redemption appeared in human flesh, was crucified, and rose the third day from the dead." 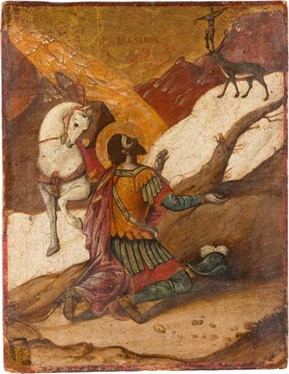 How shocking it would appear to our Fathers in the Faith that most of our theologians and teachers of the Faith today deny the literal truth of this testimony from the lips of Our Lord!  Let us pray through the intercession of Our Lady of Fatima, whose great Miracle of the Sun we will commemorate in a few days, that all Catholics will receive the grace to see that it would be impossible for Our Lord Jesus Christ to have testified to His fiat creation of all things if it were not true—and that it is time for us to renew our unbounded confidence in His Word and to withdraw it from the fallible scientific conjectures and diktats of sinful men!