In every age, God has raised up prophets to bear witness to the truth - especially to those parts of the truth that are most neglected or opposed in that particular age.  From the beginning of human history, the truth about fiat Creation, the Fall, and the Flood has required prophetic confirmation, since these events have no analog in man’s every-day experience.  According to St. John Chrysostom, it was for this reason that God made Moses the “prophet of the past,” spoke with him face to face, and showed him the work of creation.  Under God’s inspiration, Moses then instituted the Sabbath as the central ritual of the Jewish people, a perpetual memorial of God’s finished work of creation, and an everlasting reminder of the radical difference between the order of creation and the natural order of providence which only began after the creation of Adam and Eve.

In spite of all of the miracles and fulfillments of Biblical prophecy, culminating in the life, death and resurrection of Our Lord Jesus Christ, skepticism about the truth of the sacred history of Genesis has existed from the beginning of the Church.  The oldest Christian kingdom flourished in Armenia at the beginning of the fourth century under the spiritual guidance of one of her greatest saints, St. James of Nisibis, who attended the Council of Nicea in 325.  The Armenian Church recalls that:

According to tradition, while St. James preached in and around Nisibis, he heard that people doubted the story of Noah's Ark.  He was determined to provide his flock with evidence, so he set out on a journey to the top of Mount Ararat to find the remains of the ark. 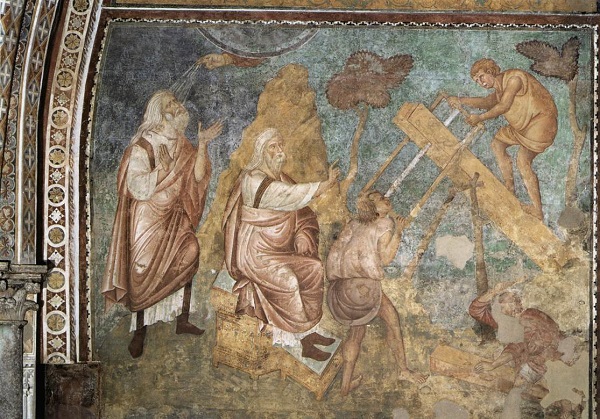 The Construction of the Ark by Jacobo Torriti

One day, while he slept, an angel appeared to him in a vision and brought him a piece of the wood from Noah's Ark. The angel told him that he could not see any more of the ark, but that the wooden remnant would be proof enough for the naysayers.

St. James prayed to God to produce an eternal miracle on the spot where he had the vision and immediately afterward a spring gushed forth, which exists to this day. The relic of Noah's Ark received by St. James is currently in possession of Holy Etchmiadzin [the cathedral and mother church of the Armenians, located on the spot where the Patriarch Noah offered sacrifice after the Flood].[1]

Knowing that doubts regarding the sacred history of Genesis would inevitably lead to doubts regarding the rest of Divine Revelation, the filial faith and piety of St. James compelled him to seek confirmation of the truth of the Mosaic account of the Flood.  The relic of Noah’s Ark that was given to St. James bore witness to the historical truth of Genesis and the trustworthiness of God’s revelation.

Our new friend John Evans with the Bible and Spade apostolate has written a fascinating article on the historical background of the most plausible of the sites identified as possible locations of the remains of Noah’s Ark.   When you read the article, as we hope you will, we pray that you will renew your determination to defend the literal historical truth of Genesis 1-11, especially in relation to Creation and the Flood.  At Akita Japan, in the year of Roe vs. Wade, and in a number of other approved private revelations, Our Lady has warned of a “punishment worse than the Deluge” if mankind does not repent and turn back to God.   Let us pray that the elections that take place in the United States on Tuesday will put the U.S. and the world on the path of repentance - and not on the path to a fiery global chastisement, “worse than the Flood.”

P.S. Today is a First Saturday.  Our Lady of Fatima explained the Five First Saturdays to Sr. Lucia dos Santos, one of the Fatima visionaries, on Dec. 10, 1925, in the following way: