In Advent Holy Mother Church bids us reflect not only on the Incarnation and Nativity of Our Lord but also on His Second Advent.  In this regard, the traditional Catholic reading of Genesis confers hope.  It gives Christians confidence that the same beautiful harmony that existed throughout the whole universe “in the beginning” will be restored “in the end” through the working of the Holy Ghost.  It also strengthens men’s faith in the credibility of the prophecies of numerous canonized saints who have foretold a future flowering of Christianity before the final judgment and the end of the world when many of the characteristics of the first created world will be restored.  The Christian who comprehends and believes in the patristic understanding of creation also has the capacity to reconcile the occurrence of death-dealing natural disasters with the absolute goodness of God who wills no evil.

In light of the traditional understanding of Genesis, the faithful know that destructive natural disasters do not reflect the natural order as it came forth from God’s hands.  Moreover, they understand that such disasters result directly or indirectly from the sins of mankind, and that they have a twofold purpose—first, to correct sinners, and, second, to bring them to repentance.  According to the traditional doctrine of creation, the first created world operated in perfect harmony and subordination to Adam and Eve, so long as they in turn remained subordinated to the Divine Will. The course of nature as we know it today resulted from a curse imposed on nature by God after Adam’s fall.  With this in mind, the traditional understanding inspires a fervent hope that each repentant sinner and divinized saint brings the world one step closer to the day when the wolf will lie down with the lamb.

Theistic evolutionism cannot conceive of an original harmonious state of the universe, and thus either dismisses prophecies of a future restoration of the world before the final judgment or misinterprets them as referring to some kind of Teilhardian evolution of consciousness.  In general, theistic evolutionism leads its adherents to believe that God deliberately ordained a struggle for existence and a process of natural selection as his means for producing the human body through secondary causes.  For the theistic evolutionist, man-harming natural disasters, such as tsunamis, earthquakes, and volcanoes, are just part of the ordinary course of nature as created by God from the beginning.  Consequently, the theistic evolutionist does not see the connection between natural disasters and men’s sins, and thus fails to interpret “the signs of the times.”  Faced with the painful reality of natural disasters, he either lives in a constant state of denial that God uses such events to accomplish his purposes without regard to human sin, or else he falls into despair at the contradiction between such a god and the God of love revealed in the Bible.

Scripture, Tradition and the approved private revelations of the mystical saints of the Church confirm that after the current unprecedented world-wide crisis of faith the “era of peace” promised by Our Lady of Fatima will take place before the rise of the final Antichrist, followed by the final Judgment and the end of the world.  While these sources of truth do not provide a precise time-line for the final end-times events, the Second Coming and the end of the world, Sacred Tradition and the private revelations approved by the Church strongly suggest that the end of the world will not be long in coming.  When the extraordinary Belgian Jesuit exegete Cornelius a Lapide wrote his great commentary on Scripture, he did not hesitate to endorse the interpretation of St. Irenaeus et al that there would be six thousand years of human history before the rise of the final Antichrist.

There are several reasons why no Catholic should be scandalized by this interpretation, apparently so naïve and counter to the alleged scientific chronology of millions and billions of years.  In the first place, the numbers in the Book of Revelation, or the Apocalypse, are symbolic numbers, because the Apocalypse is not an historical but a prophetic book.  Thus, the “seven” Churches of which St. John writes not only represent the variety of Churches in the world at the time of St. John’s revelation, but rather all of the Churches that will ever be, the number “seven” being the number of fullness or perfection.  Similarly, the number “one thousand” in this context does not mean a literal thousand years, but a period that represents a certain “fullness” of time—as when the psalmist records God’s declaration that “the cattle on a thousand hills are Mine”—not as if the cattle on the thousand and first hill belonged to someone else, but as a poetic way of saying that the full number—the totality—of all of the creatures belong to Him.

This use of numbers stands in marked contrast to the way that Moses uses numbers in the sacred history of Genesis, so it is not surprising that there was a tendency to see the six literal 24-hour days of Genesis One as a foreshadowing of a literal six thousand years of human history before the rise of the final Antichrist.  On the other hand, Venerable Bede was one of the great Fathers and Doctors of the Church who divided the history of the world into six ages rather than into six literal thousand-year periods.  And when the seventeenth century prophet Venerable Bartholomew Holzhauser wrote his remarkable predictions concerning the future of the Church and of the world—so many of which have already been fulfilled—he was also inspired to divide human history into six periods, but not into a literal six millennia, thus showing his understanding of the “thousand years” of Revelation 20 as a “period of a fullness of time” rather than as a literal thousand years.  According to Venerable Bartholomew:

During the fifth period, we saw only calamities and devastation; oppression of Catholics by tyrants and heretics; execution of Kings, and conspiracies to set up republics . . . Are we not to fear, during this period, that the Mohammedans will come again, working out their sinister schemes against the Latin Church? . . . During this period men will abuse the freedom of conscience conceded to them . . . there will be laxity in divine and human precepts.  Discipline will suffer.  The holy canons will be completely disregarded, and the clergy will not respect the laws of the Church.  Everyone will be carried away and led to believe and to do what he fancies, according to the manner of the flesh.. . . But, by the hand of God Almighty, there occurs so wondrous a change during the sixth period that no one can humanly visualize it.

The sixth period of the Church will begin with the powerful Monarch and the holy Pontiff . . . and it will last until the revelation of Antichrist.  In this period, God will console His Holy Church for the affliction and great tribulation she has endured during the fifth period.  All nations will become Catholic.  Vocations will be abundant as never before, and all men will seek only the Kingdom of God and His justice.  Men will live in peace, and this will be granted because people will make their peace with God.  They will live under the protection of the Great Monarch and his successors.  All nations will come to worship God in the true Catholic and Roman faith.  There will be many Saints and Doctors on earth.  Peace will reign over the whole earth because God will bind Satan for a number of years until the days of the Son of Perdition.   No one will be able to pervert the Word of God since, during the sixth period, there will be an Ecumenical Council which will be the greatest of all councils.  By the grace of God, by the power of the Great Monarch, by the authority of the Holy Pontiff, and by the union of all the most devout princes, atheism and every heresy will be banished from the earth.  The Council will define the true sense of Holy Scripture, and this will be believed and accepted by everyone.

Another reason why it makes sense to believe that the final end times events will take place in the not-too-distant future is that genetic entropy is taking place at such a fast rate that it is unlikely that the human race can remain viable for very much longer.  As plant geneticist Dr. John Sanford has observed:

there is now very strong evidence that man is degenerating genetically (and has been for thousands of years), due to continuously accumulating mutations. This makes it very reasonable to conclude that the systematic degeneration of man that is documented in the Bible was due to mutation accumulation and resultant “genetic entropy”. Indeed, biologically realistic numerical simulations . . . show that given our current mutation rate (about 100 new mutations per person per generation), human fitness and longevity should have historically followed a decay curve very similar to the Biblically-recorded decline in life expectancies. However, the extremely precipitous decline in lifespans recorded in the Bible, just after the Flood, is actually significantly  steeper than our numerical simulations would have predicted. We have reasons to believe that the Flood was a high-radiation event, and that in the centuries immediately after the Flood, mutation rates may have been substantially higher than present. 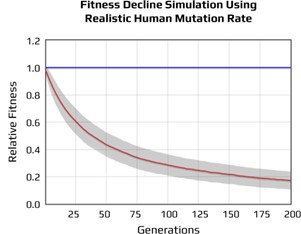 Our primary conclusion is that the lifespan data strongly supports the historicity and veracity of the Bible, and in particular, the book of Genesis. Likewise, the Biblical data strongly indicates that the emerging scientific evidences of genetic degeneration in man are correct, and that genetic entropy is very real. Genetic entropy is the antithesis of evolution and powerfully speaks of the Biblical Fall. All of this points to the desperate need for the redemption of mankind and all creation.

Our Heavenly Father could, of course, heal the genetic defects of the whole human race in an instant, miraculously, but it does not appear to be His Will to do this, since the effects of Original Sin serve as constant reminders that we have on Earth “no lasting city,” and that our true citizenship is, or ought to be, with our heavenly Abba and the angels and saints in Heaven.

Through the prayers of Our Lady of Fatima, and of all the Holy Angels and Saints, may all of our thoughts, words, and actions hasten the Triumph of the Immaculate Heart of Mary and the social reign of Christ the King throughout the world!