When one reflects on the way that a small number of (humanly speaking) defenseless Christians transformed a pagan world into a Catholic Christian civilization, there are three characteristics of those early Christians that stand out: 1) their supernatural Faith; 2) their supernatural Charity; and 3) the Miracles worked by the members of the Mystical Body of Christ which confirmed the supernatural origin of their Faith.  In the life of St. Benedict, for example, we read of the fearsome barbarian warlord Totila who was brought to his knees by a miracle of St. Benedict.  According to one account:

In autumn of 542 AD, while the Goth King Totila was passing through Cassino en route to Naples to attack it, he decided to test Saint Benedict because he had already heard of his gifts and charisms. As a consequence, Totila sent his squire dressed as a king to greet the monk; but Saint Benedict soon unmasked him. When he finally met Totila, he warned him with a dire prediction: “You have hurt many and you continue to do it, now stop behaving badly! You will enter Rome, you will cross the vast sea, you will reign for nine years; however, in the tenth year, you will die.” And that is exactly what happened.

The lives of the saints contain numerous examples of conversions of huge numbers of pagans by the wonder-workers of the early Church.  Indeed, down through the centuries, innumerable pagans have been won and heretics won back to the true Faith by the stupendous miracles of saints like St. Dominic, St. Vincent Ferrer, St. Francis Xavier, and St. Gerard Majella.  All of these wonder-workers believed and proclaimed that God created the heavens and the earth the seas and all they contain by speaking them into existence at the beginning of time.  Believing, as they all did, that God created Adam, body and soul, instantly and immediately, by willing him into existence from the slime of the earth on the sixth day of creation, it was easy for them to believe that in the Name of Jesus they could raise the dead, give sight to the blind, make the deaf hear and the lame walk.

Even as rationalism and naturalism began to infect the thinking of ever-greater numbers of Catholic intellectuals and Church leaders beginning in the 17th and 18th centuries, the saints who continued to work wonders were those who kept their faith in the First Article of the Creed and the straightforward interpretation of the sacred history of Genesis as it was handed down from the Apostles. Indeed, the greatest wonder-workers in the history of the Church on the North American continent, Venerable Antonio Margil (1657-1726) and Blessed Solanus Casey (1870-1957), worked every kind of miracle that Our Lord Jesus Christ performed.  This they did while constantly proclaiming their faith in the sacred history of Genesis and meditating every day on the Mystical City of God by Venerable Maria of Agreda who was told that Our Blessed Mother was shown the six days of fiat creation, exactly as they had been shown to Moses.

In recent times, when almost all Catholic intellectuals had lost their faith in the literal historical truth of the sacred history of Genesis, St. Padre Pio worked every kind of miracle that Our Lord Jesus Christ worked when He walked the earth, all the while retaining a child-like faith in special creation and the Biblical chronology of the universe.  In our own day, faith in the sacred history of Genesis has reached its lowest ebb since the time of the Apostles; and, not surprisingly, the number and the quality of reported miracles has plummeted.  Even some of the miracles accepted for beatification and canonization in recent decades do not meet the strict criteria that were used for centuries to evaluate miracles in the processes for beatification and canonization.

Because of the close link between faith in fiat creation and faith in the possibility of miracles, we are convinced that Our Lord and the Blessed Mother will work many miracles to confirm the truth of the traditional Catholic doctrine of creation—and we often invite people to ask for miracles from Our Lord as a confirmation that the doctrine of creation that we proclaim and defend is true.  In the course of my travels for the Kolbe Center, I have been privileged to meet many Catholics who have experienced miracles through the same faith that has empowered them to hold fast to the traditional doctrine of creation.  On a recent seminar tour I was blessed to make the acquaintance of Lani Randall, a Palestinian Catholic who has witnessed many miracles, and who was gracious enough to share her testimony with me.  With Lani’s permission, in this newsletter I would like to relate some of the miracles that she shared with me, in the hope that her testimony will encourage all of us to believe in God for miracles, especially as a confirmation of the truth of the traditional doctrine of creation and the literal truth of the sacred history of Genesis.

Lani tells me that God works stupendous miracles for the Palestinian Christians, Catholic and Orthodox, in Palestine, because they have been mostly abandoned by everyone else, and "The Lord hears the cry of the poor."  As a Catholic wife and mother of five, living in Florida, Lani is often inspired to pray for healing for members of her own family, for friends, and for complete strangers.  She writes:

God likes to give me a sign when I pray for people for healing especially, in the form of a Monarch Butterfly.  When my Dad passed away back in 2010, I was standing in the garden of my parents’ backyard, the garden that my father had created.  While I stood there with my oldest two children (who were only 4 and 2 at the time), we had a beautiful encounter with a Monarch Butterfly.  This butterfly perched on my left shoulder, then it touched my cheek as if kissing me, then it flew over to touch/"kiss" my daughter's cheek, then it touched/"kissed" my son's cheek...It was a supernatural experience with God's creation, one that I'll never forget.  To this day, I can't tell you how many times I see a Monarch Butterfly at strategic times, especially right after I pray for healing.  One time, it was 7 o’clock in the evening and it was already dark, and I had just visited a Catholic neighbor of mine who wanted healing prayer, so after we finished, we stepped outside only to see a LARGE monarch butterfly hovering over us, although it was dark outside!  We couldn't believe how big and beautiful it was, clearly the largest we'd ever seen, right there in the dark!  How can we ignore the signs God gives us?  I know I can't.  I rejoice in the way God communicates with me! 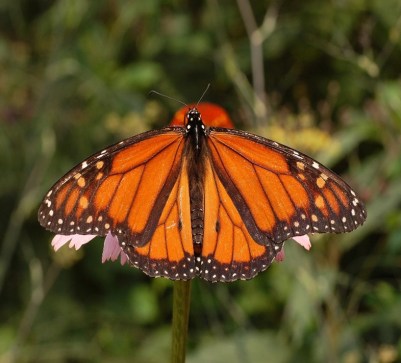 I've also had some miracles happen with my children.  One that stands out was when my oldest son had chronic ear infections when he was young, and without knowing alternative solutions, we bought into the idea of having tubes inserted into his ears.  Well, one of them fell out prematurely leaving the hole exposed in his ear drum.  We were told he cannot get any water in that ear until the hole heals, if it ever heals completely, because at that point, we were told by the ENT that there's only a 50% chance it'll heal, and if it doesn't completely heal, he'll have to wear the custom ear plugs we bought him every time he takes a shower or swims to keep water out.  Well, that's no way to live!   I remember attending Holy Mass at Our Lady of the Rosary Catholic Church on the feast day of Our Lady of Fatima, and our church hosted the traveling statue of Our Lady of Fatima, which was known for miracles.  While kneeling close to the statue, I prayed asking the intercession of Our Lady of Fatima for a miraculous healing of the hole in my son's ear.   Shortly afterwards, I took my son to the ENT for a checkup.  The Doctor kept looking back and forth in his ear, and then at his chart, and she did this three or four times.  I finally asked her if something was wrong, and her response was something like, "I can barely see the hole; it seems to be healing very fast."  I told her I had prayed for the hole to be healed miraculously, and I won't forget her response as she said that it's unusual that it would heal so fast considering the size of it last time she checked it, and that "It appears your prayer is being answered!"  Well, the hole healed completely after that, and my son has not had any problems with that ear ever since, GLORY TO GOD!  I am SO grateful for Our Lady of Fatima's intercession! 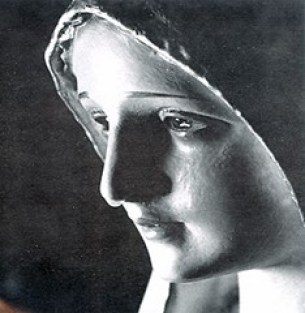 Our Lord Jesus Christ tells us that we will know the tree by its fruits, whether it is evil or good.  In the same way, we will be able to know if the recent consecration of Russia was pleasing to God by the fruits—or lack of fruits—of the consecration, since Our Lady told us that the conversion of Russia would be a direct result of the consecration when it is done according to her requests.  In the meantime, we all have a lot of work to do, since Our Lady expects all of us to consecrate ourselves to Our Lord Jesus Christ through the Immaculate Heart of Mary and to stive to live that consecration in every moment of our lives. Thus, She linked the request for the Consecration of Russia to her request that all of her children practice the devotion of the Five First Saturday’s.  Showing Sister Lucia her Immaculate Heart surrounded by thorns, Our Lady told her:

See, My daughter, My heart surrounded by thorns which ungrateful men pierce at every moment by their blasphemies and ingratitude… Say to all those who, for five months, on the first Saturday, confess, receive Holy Communion, recite the Rosary and keep Me company for 15 minutes while meditating on the fifteen mysteries of the Rosary, in a spirit of reparation, I promise to assist them at the hour of death with all the graces necessary for the salvation of their souls.

On this First Saturday of April, let us resolve to honor Our Lady’s First Saturday request every Saturday for the rest of our lives, offering up all of our prayers and sacrifices for the final and complete fulfillment of all of her requests.