This Sunday, July 28, the Kolbe Center will sponsor an evangelization project on the Mall near to the Natural History Museum in Washington, D.C. from 2 to 5 p.m. EST. I would like to ask as many of our readers as possible to pray for the success of this outreach during those hours, wherever you may happen to be. In this newsletter, I will highlight some of the principal errors that are inculcated in the minds of the millions of visitors who come from all over the world to view the exhibits at the Natural History Museum. 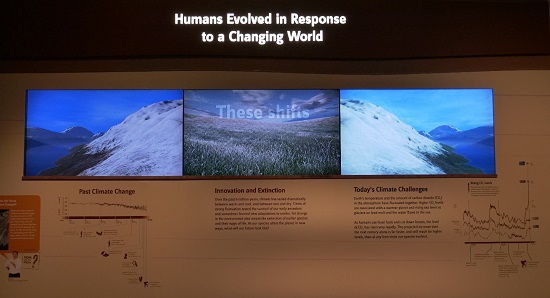 One of the saddest aspects of the evolutionary world view is that its chief advocates tend to hold theology and philosophy in contempt, believing, as most of them do, that empirical science is the only reliable source of truth. No matter how intelligent a person may be, if he accepts this framework, he creates a prison for himself from which it is very difficult to escape. Even if he is asked to identify the empirical experiment that proved that empirical science is the only reliable source of truth, he is likely to dismiss such a question as mere sophistry in the face of the "obvious" fact that repeatable experiments with things that can be measured and quantified are self-evidently more reliable than conclusions that are the result of some process of abstract reasoning. Thus, it is the rare visitor to the Natural History Museum who would dream of questioning the absurd heading that introduces him to the current exhibit on human evolution: "Humans Evolved in Response to a Changing World."

And yet it does not take much of an acquaintance with sound philosophy to realize that something is seriously wrong with that heading. In his encyclical Fides et Ratio Pope St. John Paul II echoed the exhortation of his predecessor Pope Pius XII to the Bishops and theologians of the Church in his encyclical Humani generis to use the traditional metaphysical principles of traditional Catholic philosophy in their examination of the evolutionary hypothesis. As Fr. Chad Ripperger has pointed out in his excellent book The Metaphysics of Evolution, one of these fundamental principles of common sense is that "no effect is greater than its cause." According to Pope Pius XII and Pope St. John Paul II, then, any system of thought that violates this principle is bogus - and one would be wasting his time to give it any further attention. With this in mind, let us look again at that heading from the evolution exhibit at the Natural History Museum: "Humans Evolved in Response to a Changing World." What does this actually mean? As we shall see, it means that the ENVIRONMENT of sub-Saharan Africa was able to change the body of a sub-human primate into the body of a human being! That this is precisely what the heading is claiming will become clear as we take a closer look at the exhibit. But let us take a moment to think about this before we go any further.

Without knowing anything about the details of ape physiology as compared with human physiology, we can see that there are some very significant differences - for example, between an ape hand and a human hand; between ape fur and human skin; between ape posture and human posture. With all due respect for the Environment, we may be pardoned for asking how it managed to engineer the 24 facial muscles that are present in humans but not in gorillas, or the Broca's Area and Wenicke's area in the brain that play such an active role in human speech. With just these differences in mind, is there anything concrete that we can point to in the environment of Sub-Saharan Africa that could be a plausible "cause" of the distinctive features of a human, as opposed to a simian, body? To ask the question is to answer it - because the answer is obvious. The "effect" - engineering the distinctive features of a human body - is much greater than the "cause" - the environment of Sub-Saharan Africa - with all of its flora and fauna, even in an imaginary aeon of millions of years before the appearance of human beings. 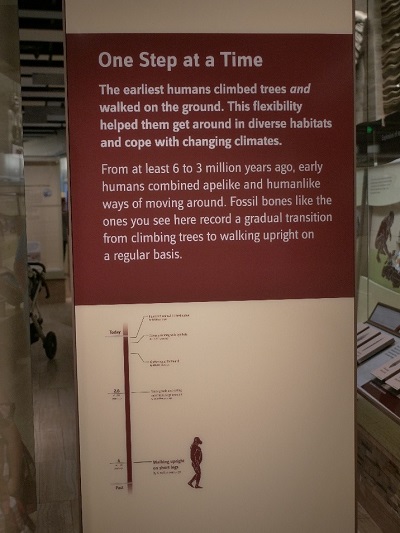 At this point, it may be helpful to make an analogy. Imagine that you enter a building with an interior temperature that is almost the same as the temperature out of doors. Imagine, then, that the outside temperature drops precipitously, and that, all of a sudden, an internal heating system begins to pump hot air through the building. Would anyone in his right mind suppose that the change in climate - the environment - produced the heating system within the house? Even a child would know that the drastic drop in temperature had merely activated a heating system that had previously been installed in the house. The effect - the heating of air and the pumping of hot air around the house - was caused not by a change in temperature, but by a heating system designed, engineered, and installed in the building before any change in the environment activated the system. Similarly, who would imagine that a house without a heating system, placed in any environment on Earth, would gradually acquire one through the influence of the environment on the house over millions of years? We can be quite sure that if a tree-dwelling creature turned into a land-dwelling, walking, bi-pedal creature, the ability to walk on the ground would have to be engineered in the tree-dweller before he came down from the trees. No change in the environment could endow a body adapted to swinging from the trees with the ability to live and walk on the ground. The "effect," in that case, would be "much, much greater than the cause."

But the Smithsonian's evolution exhibit is not only philosophically absurd. It is also dishonest. In spite of the fact that most evolution-believing scientists admit that Lucy was not an ancestor of humans but an australopithecine ape, the Smithsonian gives their visitors the impression that Lucy was a human ancestor. The unstated assumption behind this claim is that, given enough time, the environment can transform the body of a knuckle-dragging ape into the body of an upright human. But, once again, reality not only clashes with this claim; it is diametrically opposed to it. In the world of genomes, as in the world of physics, time is the enemy, not the friend, of self-organization. As plant geneticist Dr. John Sanford has demonstrated in his masterpiece Genetic Entropy, each generation of humans is more mutant than the previous one, so that, if the Smithsonian's fantastic time-scale were true, long before three million mythical years had gone by, Lucy's descendants would have been so mutant that they would have been incapable of reproducing themselves! 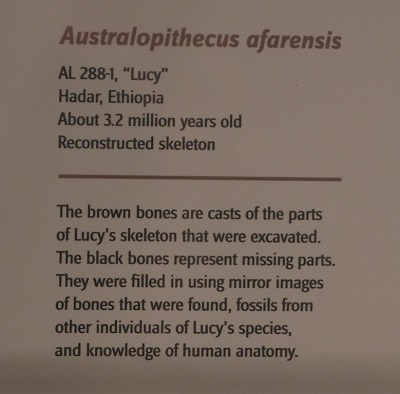 In the first chapter of his Letter to the Romans, St. Paul describes what happens to people who deny the truth about creation. He says that as they "exchange the truth for a lie" they will begin to worship the creature rather than the Creator. For example, they will attribute to the "environment" - a created entity - the power to produce what only the Creator Himself can bring into existence. He goes on to say that those who deny the Creator and His true relationship to nature will begin to act against their own natures, using their bodies in ways that directly contradict His design, and reaping the deadly consequences in time and eternity. Please pray that we will be able to reach many of these lost souls on Sunday afternoon, within a stone's throw of the Smithsonian Natural History Museum, "the Temple of Evolution," in Washington, D.C.

P.S. The photographs of the evolution exhibit shown above were taken by one of the attendees at the Kolbe leadership retreat during a brief visit to Washington, D.C., before the retreat.

P.P.S. Our friends at St. Joseph's Radio in St. Louis recorded the Kolbe leadership retreat talks again this year. We would like to support their apostolate, so we invite you to go to this link on our website, and order the DVDs or CDs you want directly from St. Joseph's Radio using the contact information provided on the forms.