In our presentation on the Doctrine of Creation in Sacred Tradition at the recent Kolbe leadership retreat conference at Conception Abbey in Missouri, we identified the account of St. Daniel, Susanna, and the corrupt judges in the Book of Daniel as a foreshadowing of the current crisis in the Church. (This talk and the other presentations from the conference are all available in DVD or audio CD format through the Kolbe web store.) Susanna was a chaste wife of spotless character who was falsely accused of committing adultery by corrupt judges after she refused to sin with them. Because the judges confirmed each other's testimony, the people believed their accusations and they were preparing to stone Susanna to death when a teenaged young man, St. Daniel, intervened and demanded an examination. As soon as the corrupt elders were forced to present their case against Susanna, their lies were exposed, and Susanna's immaculate purity was vindicated before all the people. 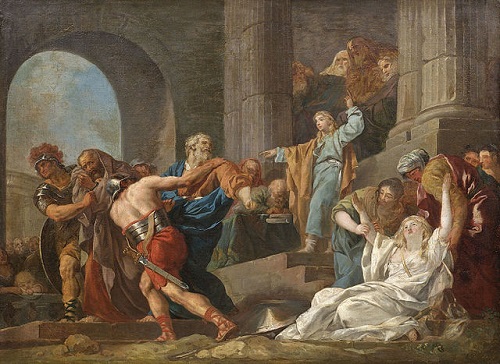 In a similar way, for the past 50 or 60 years, many of the leaders of the Church - whose job it is to preserve the Deposit of Faith in all of its purity as it was handed down from the Apostles - have allowed the wild conjectures of evolutionary pseudo-science to be used as a pretext to impugn the goodness of God's original creation, the inerrancy of Scripture, and the infallibility of the Church's authoritative teaching. In this crisis, it is mostly young men who have been blessed to receive a traditional Catholic formation from childhood who are now playing the part of St Daniel and examining the claims of their elders who have used the alleged "fact" of molecules to man evolution to mock and mythologize the sacred history of Genesis. These new "Daniels" do this in everyday interactions with fellow Catholics, by writing excellent articles in defense of the traditional doctrine of creation for the Kolbe website, and, most recently, by producing "Darwin's Documentaries" to highlight the absurdity of the "scientific" claims of evolutionary apologists. I am sure you will enjoy the latest addition to "Darwin's Documentaries" on the Kolbe home page at this link.

We are still a few thousand dollars short of our fundraising goal to complete our DVD series by the end of the year. If you would be willing and able to help us, please go to this link, make a donation, and send me an email stating that you want the donation to be used to complete the DVD project.