A blessed feast of St. Maximilian Kolbe to all of you!

On the feast of Our Lady's Assumption into Heaven I am departing for Uganda where Dr. Thomas Seiler and I will be meeting with several bishops and hopefully laying the groundwork to establish a center in Uganda from which we can help to train the Catholic youth of Africa to hold fast to the true doctrine of creation as the rock foundation of the Faith and as the only firm foundation for a culture of life. Please pray very hard for us that we will be able to overcome all of the obstacles that the demons will try to throw in our way and accomplish the mission that God has entrusted to us.

We often tell our Ugandan brothers and sisters that "the Church in Uganda can save the world." A year ago, we wrote and distributed a pamphlet on that theme to pilgrims from all over Uganda before the Feast of the Uganda Martyrs. I would like to share the text of the pamphlet with you as I commend our mission to your prayers:

The Church in Uganda Can Save the World 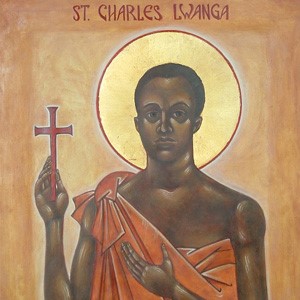 The Church in Africa has saved the world once, and she can do it again. At the height of the Arian heresy in the fourth century, 97% of the Bishops of the Catholic Church were in communion with Arian heretics who denied the divinity of Our Lord Jesus Christ. At the mouth of the Nile River, St. Athanasius, African Bishop of Alexandria, defended the Nicene definition of the Divinity of Christ against the Arians. Four times he was driven from his See by the Arian faction, who were supported by the wealth and military might of the Emperor of the West. At one point, the Pope himself ratified St. Athanasius' banishment from his See, and St. Athanasius was forced to spend many years in exile. A number of times, St. Athanasius narrowly escaped murder at the hands of the Arians and had to seek shelter among the monks of the desert. Yet St. Athanasius never compromised the true Faith and lived to see the tide turn against the Arian heresy. After more than 50 years of profound confusion, in 381 A.D. the First Ecumenical Council of Constantinople ratified the Nicene Creed in its permanent form and defined the Divinity of Christ once and for all.

The first Catholic missionaries in Uganda required a long preparation for Holy Baptism with solid catechesis. Consequently, the roots of the Faith struck deep in the soil of Ugandan society. Sadly, the fervent faith that animated the first missionaries to Africa began to deteriorate in Europe by the end of the nineteenth century, prompting Pope Leo XIII to found the Pontifical Biblical Commission to combat the modernism that had begun to spread through the ranks of the clergy and intellectual laity. While the French missionaries were sowing the seeds of faith in Uganda, Pope Leo XIII lamented the spread of godlessness in Europe. And at the very time when Fr. Lourdel refused Holy Baptism to the polygamous King Mutesa to safeguard the sanctity of Holy Marriage, the European freemasons and their allies launched an all-out campaign to legalize divorce - sometimes, with good reason, called "serial polygamy" - in Catholic countries where it was prohibited by law. To combat this assault on the foundations of Christian society, Pope Leo published an entire encyclical on Holy Marriage entitled Arcanum divinae in which he exhorted the Bishops of the whole world to defend Holy Matrimony on the foundation of God's Revelation in Genesis:

The true origin of marriage, venerable brothers, is well known to all . . .We record what is to all known, and cannot be doubted by any, that God, on the sixth day of creation, having made man from the slime of the earth, and having breathed into his face the breath of life, gave him a companion, whom He miraculously took from the side of Adam when he was locked in sleep . . . And this union of man and woman . . . even from the beginning manifested chiefly two most excellent properties . . . namely, unity and perpetuity (emphasis added) (Pope Leo XIII, Arcanum, 5). 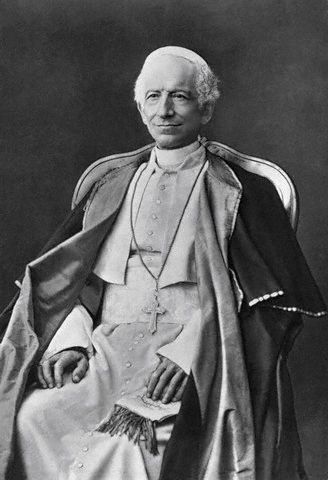 This was the faith that inspired St. Joseph Mukasa to put away all of his wives but one; but, increasingly, as early as the beginning of the twentieth century, what Pope Leo XIII had said "was known to all and cannot be denied by anyone" was no longer being taught to the younger generation of Catholics and would soon be denied by most of their teachers. When St. Pius X succeeded Pope Leo XIII, he lamented the accelerating eclipse of orthodoxy, identifying modernism as "the synthesis of all heresies" and "evolution" as the "principal doctrine of the modernists." Other heresies, he noted, had added, subtracted or distorted some part of the Deposit of Faith; but evolution-based modernism conceived of the whole world as in a state of continuous evolution and thus abandoned the very notion of immutable Truth. On every side, he saw Catholic intellectuals rejecting scriptural inerrancy and the sacred history of Genesis on the grounds that "natural science" had proven that the Bible contained historical errors and that advances in geology and biology had proven that man had evolved from a one-celled organism through millions of years of the same kinds of natural processes he observed in the present. Vatican One had already anathematized the proposition that "the progress of the sciences demands that the Catholic doctrine of creation be recast," but St. Pius X saw that the ranks of Catholic intelligentsia holding that error continued to swell, so he renewed the anathema in his own name.

In 1907, in his encyclical Pascendi, St. Pius noted that, for the modernist, liturgy and doctrine had to be adapted to the changing circumstances produced by the evolutionary process. Thus, God's revelation that He created one man for one woman for life from the beginning of creation had to be "reinterpreted" in light of the "scientific" hypothesis of human evolution which holds that the human body evolved from a common ancestor of chimps and humans. And with the widespread acceptance of this error, the foundations of Catholic teaching on Holy Marriage have been eroded or destroyed. 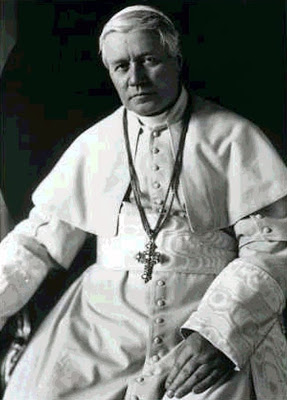 For example, in the once fervently Catholic republic of Ireland, 95% of young adult voters in a recent referendum voted to raise "marriage" between two men or two women to the level of true marriage. Almost all of these young people were baptized Catholics who had been catechized in Catholic schools or religious education programs. Yet virtually all of them had been taught that humans evolved from a common ancestor with chimpanzees and that, since our "cousins," the chimpanzees and other sub-human primates, indulge in homosexuality, this behavior must be natural and normal for human beings. This is doubly tragic, because cutting-edge scientific research in genetics, paleontology, and every area of natural science refutes the false hypothesis of human evolution and confirms the special creation of Adam and Eve in a state of genetic perfection less than ten thousand years ago. [1]

Instead of teaching young Catholics the scientific evidence that confirms the sacred history of Genesis and the traditional teaching of the Catholic Church on creation, most Catholic schools and universities in the Western world now teach that Genesis is a "myth" and that God used a process of hundreds of millions of years of evolution - filled with death, deformity and disease - to evolve the bodies of the first human beings. The result has been a mass exodus of young people out of the Catholic Church, so that only a small percentage of Catholic youth remain in the pews of Europe and North America. This is hardly surprising, since, if molecules-to-man evolution is true, almighty God allowed His Church to teach a totally false account of the origins of man and the universe for almost two thousand years, and then corrected Her, not by raising up saints and scholars from within His Church to enlighten Her, but by raising up godless men to correct Her - men like Charles Lyell and T. H. Huxley, who hated the Church and wanted to destroy Her.

Young people are not fools. If the god of evolution used hundreds of millions of years of death and destruction to bring the bodies of the first human beings into existence, the Word of God as understood in the Church from the beginning is not free from all error; the Church Herself is not an infallible teacher; and it is the prevailing opinion among secular scientists that must serve as the ultimate standard for determining the truth or falsehood of Catholic doctrine. If these things are true, no young person in his right mind would remain in the Catholic Church - and, indeed, that is the primary reason why the young people of the so-called "rich countries" of the world are leaving the Church in droves. Yet, all the while, this situation is totally reversible, since cutting-edge natural science in every area of knowledge has confirmed the truth of the sacred history of Genesis and the traditional Catholic doctrine of creation. [2] 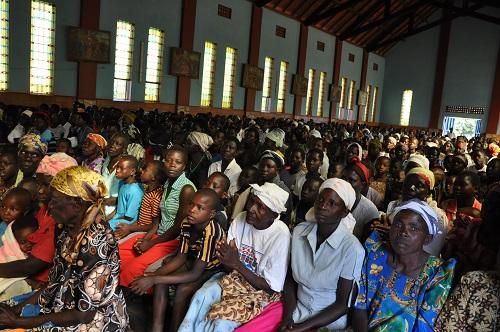 Catholics of Uganda, spiritual sons and daughters of St. Charles Lwanga and his companions, do not allow the faith of your young people to be destroyed by the same errors that have destroyed the faith of most of the Catholics in the western world. If you teach your young people that sound theology and sound natural science confirm the truth of the sacred history of Genesis, their faith will have a firm foundation, and they will be able to strengthen the faith of their "weaker brethren" around the world. As the African Bishop St. Athanasius preserved the true dogma of the Divinity of Christ at the mouth of the Nile River in the fourth century, so by the grace of God can you defend the true character of God as Creator, Redeemer, and Sanctifier at the source of the Nile River in the twenty-first century, thus making of Uganda not only "the pearl of Africa" but a "light to all the nations."

Please keep the Kolbe Center and our Uganda mission in your prayers!

[1] See Dr. John Sanford, "God, Family and Genetics," in the proceedings of "The Two Shall Become One": The Special Creation of Adam and Eve and the Foundations of the Catholic Teaching on Holy Marriage (Rome: Human Life International, 2015) [2] For an introduction to the traditional doctrine of creation from the perspective of theology, philosophy and natural science, please go to the Kolbe Center home page and watch these videos in this order:

Which is More Scientific?

The Character of God

More information on the theological, philosophical and natural science arguments for the truth of the sacred history of Genesis and the traditional Catholic doctrine of creation can be found at www.kolbecenter.org and www.originality-of-species.net

For more information, please send an email to Hugh Owen at howen@shentel.net