Dear Friends of the Kolbe Center

Tomorrow we will begin our annual leadership retreat, and I would like to ask your prayers through the intercession of Our Lady that God will bless the retreat and equip all who attend the conference or who watch the recorded talks with the spiritual and intellectual resources they will need to advance our mission.  After the leadership retreat, in September, I will be giving a whole series of seminars from Virginia to Oklahoma, from Kansas to Wisconsin, and from Michigan back to Virginia, with additional stops along the way.  I would like to devote this newsletter to the writings of G.K. Chesterton on creation and evolution, in the hope that one or more of our readers might be able to arrange an opportunity for me to give a presentation at one of the Chesterton Academies along my route.  I am doing this because I believe that the traditional Catholic doctrine of creation that we defend would provide the ideal foundation for the theological, historical and natural science studies at these academies.

G.K. Chesterton was an English convert whose prolific writings in many different literary genres helped to attract many readers to the Catholic Faith. Although he was Catholic, Chesterton wrote in a journalistic style for a broad and diverse audience. In many of his works, he used humor, paradox, and common sense to show the reasonableness of Catholic doctrine in a way that could appeal to Catholics and truth-seeking non-Catholics alike.  When he addressed the subject of the origins of man and the universe, Chesterton’s critique of molecules-to-man evolution focused on philosophical weaknesses in the hypothesis that any reasonable person could understand.  This approach made him a highly effective public critic of atheistic evolutionism and helps to explain why he was voted the winner by a two to one margin in a public creation vs evolution debate with Clarence Darrow of Scopes Trial fame. 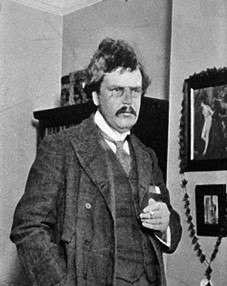 The one weakness in Chesterton’s critique of the evolutionary account of the origins of man and the universe was that he did not offer God’s Genesis Creation Revelation as understood in the Church from the beginning as a replacement for the evolutionary origins myth that was already taking over the world in his day.  While Chesterton argued effectively for the reasonableness of putting one’s faith in the Gospel accounts of Our Lord’s Passion, Death and Resurrection, he did not grant to the historical truth of Genesis 1-11 the same supernatural faith that he accorded to the four Gospels.  In this respect, he parted company with “the democracy of the dead” within the Holy Church, every one of whose Apostles, Fathers, and Doctors would have shed their last drop of blood for the literal historical truth of every part of the sacred history of Genesis.

Instead, while exposing the absurdity of atheistic molecules-to-man evolution, he left open the door to the possibility of theistic evolution.  For example, he wrote:

I do not know the true reason for a bat not having feathers; I only know that Darwin gave a false reason for its having wings. And the more the Darwinians explain, the more certain I become that Darwinism was wrong. All their explanations ignore the fact that Darwinism supposes an animal feature to appear first, not merely in an incomplete stage, but in an almost imperceptible stage. The member of a sort of mouse family, destined to found the bat family, could only have differed from his brother mice by some minute trace of membrane; and why should that enable him to escape out of a natural massacre of mice? Or even if we suppose it did serve some other purpose, it could only be by a coincidence; and this is to imagine a million coincidences accounting for every creature. A special providence watching over a bat would be a far more realistic notion than such a run of luck as that.

“Only the Supernaturalist Has a Sane View of Nature”

Unfortunately, “a special providence watching over” the transformation of a mouse into a bat has no basis in the Scriptures or in the entire Tradition of the Church.  Thus, for a Defender of the Faith like Chesterton to propose it as a sound alternative to atheistic evolution has led a large number of thoughtful Catholics who rightly respect Chesterton to stop short of examining the plausibility of “a special providence watching over a bat” as a way of making peace with the scientism of evolutionary thought.  Not surprisingly, Chesterton came close to making this examination himself when he reflected on the relationship between man and Nature in his masterpiece Orthodoxy:

Darwinism can be used to back up two mad moralities, but it cannot be used to back up a single sane one. The kinship and competition of all living creatures can be used as a reason for being insanely cruel or insanely sentimental; but not for a healthy love of animals … That you and a tiger are one may be a reason for being tender to a tiger. Or it may be a reason for being cruel as the tiger. It is one way to train the tiger to imitate you, it is a shorter way to imitate the tiger. But in neither case does evolution tell you how to treat a tiger reasonably, that is, to admire his stripes while avoiding his claws.

If you want to treat a tiger reasonably, you must go back to the garden of Eden. For the obstinate reminder continues to recur: only the supernaturalist has taken a sane view of Nature. The essence of all pantheism, evolutionism and modern cosmic religion is really in this proposition: that Nature is our mother. Unfortunately, if you regard Nature as a mother, you discover that she is a stepmother. The main point of Christianity was this: that Nature is not our mother: Nature is our sister. We can be proud of her beauty, since we have the same father; but she has no authority over us; we have to admire, but not to imitate.

In these two paragraphs, Chesterton comes very close to identifying the fatal flaw in the molecules-to-man evolutionary hypothesis in its theistic and atheistic forms.   He acknowledges that it is impossible to give a natural explanation for nature, and that only a supernaturalist—like Moses in Genesis—can give a reasonable account of the origin of nature.  In this way he comes very close to reaffirming the traditional Catholic Creation-Providence Framework for the study of the origins of man and the universe, upheld by all of the Apostles, Fathers and Doctors of the Church.  According to this framework, the entire work of creation was supernatural, and the natural order, the order of providence, in which we are living, did not begin until the entire work of creation was finished. 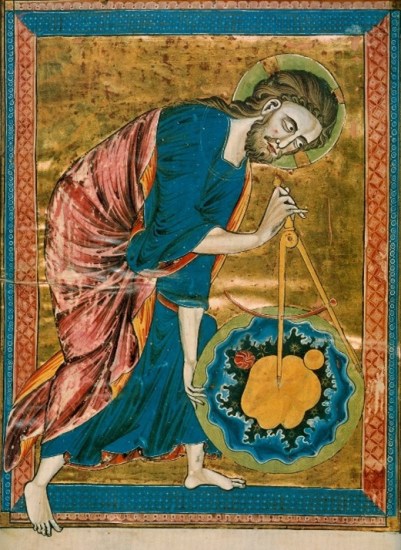 Within this traditional framework, “nature” is indeed “our sister,” because the whole natural order was produced by God supernaturally at the beginning of time, including our first parents, Adam and Eve.   Had Chesterton pursued this line of reasoning, he could have exposed the fatal flaw in the naturalistic uniformitarian approach to nature of Descartes and the Enlightenment philosophers who did, indeed, hold that “nature is our mother,” because, they assumed that “things have always been the same from the beginning of creation” (2 Peter 3) and that the same natural processes going on now could explain the origin of everything in nature, including plants, animals or even the human body.

A Fatal Concession to Scientism

By accepting the possibility that modern science could legitimately contradict and “correct” the Biblical account of creation and the history of the world so long as it made room for a “special providence” watching over the process, Chesterton unwittingly made a fatal concession to the very scientism that he rejected in principle.   Viewed from within the traditional Creation-Providence Framework believed and proclaimed by all of the Fathers and Doctors of the Church, it is apparent that natural scientists are as incapable of determining the age of the cosmos or of the Earth as they would be of determining the age of the miraculous wine at the Wedding of Cana.  In both cases, any attempt to extrapolate from our observations of presently-operating natural processes to explain the origin of the Earth or of the Cana wine would be bound to fail, no matter how intelligent the natural scientists making the extrapolations and no matter how sophisticated their technology.  Indeed, Chesterton’s defense of miracles in Orthodoxy applies just as well or better to the doctrine of fiat creation:

To paraphrase Chesterton, we can say what we wish he had said to those who tried to recast the “sacred history of Genesis” as “the exalted myth or poem of Genesis”—namely that the only reason that anyone would deny God’s revelation of how He created “the heavens, and the earth, the seas and all they contain” is because he “has a doctrine” against that revelation—the doctrine, to be precise, of naturalistic uniformitarianism, in the mode of Rene’ Descartes and Immanuel Kant, who insisted that it was possible to explain the origins of man and the universe in terms of the same natural processes going on now in the order of providence.  Chesterton’s mistake was to concede that natural scientists could establish an accurate chronology of the world that contradicted God’s revealed chronology by extrapolating from the material processes observed in the present back to the beginning of the world.

This was a fatal error, because once Catholics granted natural scientists the authority to pass judgment on the Word of God as understood in the Church from the beginning on one point, it was inevitable that the right order of the sciences would be overthrown and that natural scientists would begin dictating to the theologians in other matters of faith or morals.  In the current coronamania, scientific “experts” galore draw upon their dubious—and in most cases totally spurious—scientific knowledge to dictate to Church leaders if, when, and how they can administer or receive the sacraments and whether or not they ought to use vaccines derived from or tested on murdered babies. How many Catholics realize that this usurpation of Queen Theology’s place by upstart natural science is the culmination of a long process that began hundreds of years ago when prominent Catholic thinkers like Descartes allowed themselves to be seduced by the sons of the Enlightenment?  In particular, these brilliant thinkers were seduced into questioning God’s revelation regarding the Earth’s location in time and space—a seduction that exalted the grandiose conjectures and extrapolations of fallible human beings above the Word of God as it had been understood in the Church from the beginning. 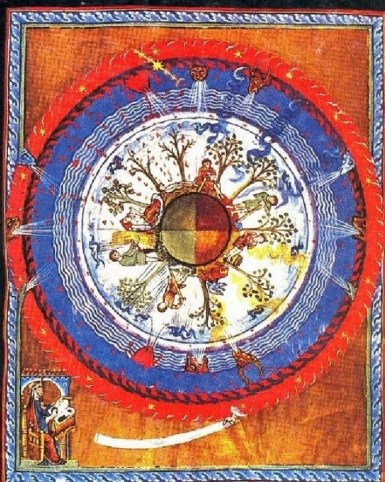 The traditional doctrine of creation and the traditional reading of Genesis 1-11 offer Chesterton Academies—and all Catholic centers of learning—the foundation that they need to anchor their studies of theology, history, and natural science in the truth and to maintain the proper hierarchy among the sciences.  Please let me know if you have contacts in any of the Chesterton Academies along my route in September who might be open to inviting me to give a talk on “The Traditional Catholic Doctrine of Creation: The Only Firm Foundation for a Culture of Life.”

P.S. Kennedy Hall has a regular program at the Fatima Center in which he provides analysis of current events from a traditional Catholic perspective.  He recently interviewed our chief biologist, Pamela Acker, on the subject of vaccines.  You can listen to the interview at this link.